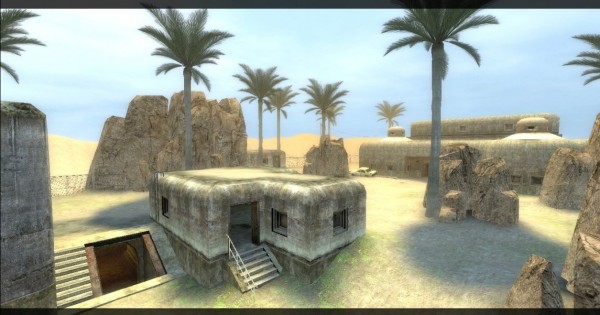 You can make Counter Strike Source Maps, follow the simple steps below

When you approach the door, don't let the terrorists see you. Move left and crouch at the left end. This allows the terrorists to not be able to notice you being there easily.

Use your headphones. Listen to the footsteps and get ready to fire. Aim high, so that you score a headshot.

After planting a bomb at site B, the best place to be is in the space behind the bricks so that you can see when you enter from the tunnel, and climb up.

Remain in the tunnel and keep aiming at the broken wall in front of you.

Keep looking at the bomb.

After planting in bomb site A, jump over and hide behind to the box. You're covered from either side and you could move around and shoot them when they come close.

In the tunnel are some great hiding spots. When you come from site B, you will see a box on your right. Go there and crouch. You could ambush players coming from the B site and you could easily kill players coming from the terrorists spawn and also from the stairs (since usually it's too dark for them to see you.) The other spot is near the stairs behind the bricks, crouch there, and look down the stairs for an easy kill. This can be easily done if, as soon as you respawn, you just take the knife, run to the spot, and camp. You can ambush and kill easily and look to the other side. You can also camp and check on people from the terrorists spawn and B site.

Always keep your aim high; you don't want to miss a headshot and survive with no hits.