Make A Redstone Internet In Minecraft 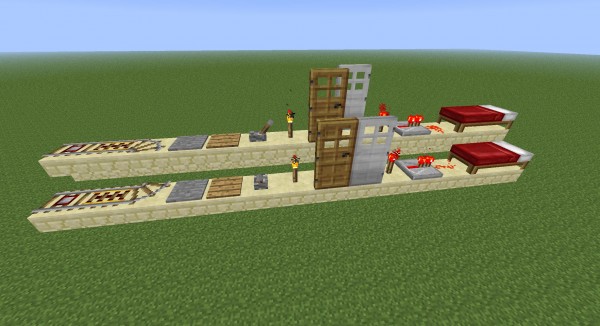 A redstone internet can be used for creation of just about anything, and this will describe the creation of two types. You require advanced knowledge to be able to make this (A binary coded decimal, also known as a decoder, a display, an input station, a programming language and a computer. Have all of these in the same lot before attempting to create this). Follow the simple steps below

Make sure that you have all of the mechanisms listed above (BCD, display, input station, prog. language and a computer, all made out of redstone). Once you have those, these next few steps will be on modifying them to be able to work with the internet. This project will also discuss creation of a router.

Modify your BCD to become suitable for the internet. Well, it should be a 10 line or more (5 inputs, 2 inputs to each output), with no override. Now, feed another bus over that first bus and those will later be used in the programming language.

Copy/paste, hopefully with worldedit otherwise, remake a BCD of the same type, but this time hook the wires up to that second bus going over the output lines of the user BCD, and these lines will be hooked up to the CPU of the computer. In that CPU you need to have your commands pre-made so that they will follow through to the display from the BCD.

Universally set time can be made by having one clock that is there and then runs off to a time station. A time station is simply a GIANT splitters, and if you need more, make more splitter. Use piston repeaters instead of normal diodes for extending the signal.

Learn how to make a router. This router will be the medium between the internet and your I/O/Computer. A router must have an IP address (I suggest 6 digit), an I/O station and a mirror cell. The IP address is simple, have the 6 line IP bus, but only put torches on inverters for setting the IP address, and then for turning it off, make it turn them all either on or off. Either way, its an Infi or Null value, meaning nothing, or the router is off.

To make the I/O you simply get the line, going down a bus and heading towards the computer, but also now, it has to have a double inverter, and the first of those two inverters for each line should have a lever on it, for toggling that line on/off. Also, a multiplexer for each line should be coming in from all the sites and a shift so that the sites don't override. Also, have each line hooked up to and gates, so that when they are all on, it will give an overload message saying that the activity should cool down.

Some things to put on it: