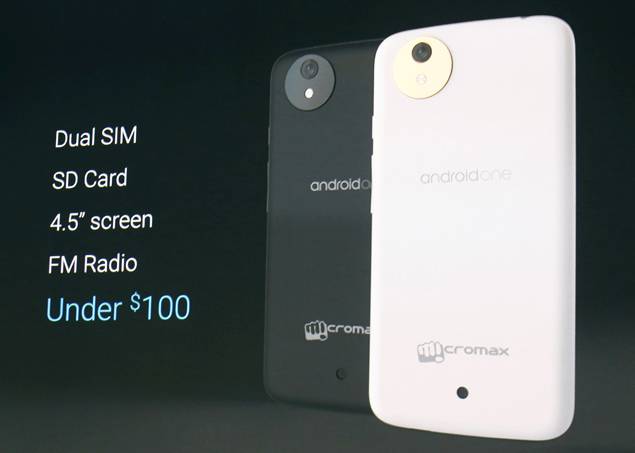 Google Inc. launched in India on Monday (15th September, 2014) the first three smartphones based on the previously announced Android One initiative.

Android One was Google's solution to reduce development time for low-cost handsets and was announced back in June at the Google I/O conference.

The three new handsets are the Spice Android One Dream UNO Mi-498, the Micromax Canvas A1 and the Karbonn Sparkle V. These phone are priced around Rs 6,399 ($100) to capture the low-cost segment of the world's fastest growing smartphone market.

As all three smartphones are based on the Android One platform, Google has designed the phone's minimum hardware requirements to keep the retail price around Rs 6,399 ($100), and will run stock Android like the Nexus line of devices.

All three phones share similar specifications as listed below

These Indian version of the phones will feature support for Hindi and includes voice commands in that language.

As an additional benefit of the Android One experience, the phones will come with Google Play Store installed and Google will also provide two years of updates directly to the phones instead of the manufacturers. Google has also stated that the Android L update will be heading to the currently KitKat-powered phones.

Indian carrier Bharti Airtel will have a special 200MB data planfor Android One users. AllAndroid Updatessent by Google as well as app updates will be free of charge and won't be counted towards a user's monthly 200MB data quota.

Those living in India can get their hands on the phones via online stores such as Amazon India, Flipkart and Snapdeal.

Google is expected to roll out more Android One devices in Indonesia, Philippines and other South Asian countries by the end of 2014, with more countries to follow in 2015. Alcatel, Panasonic, Asus, Acer, HTC and Lenovo are set to be the next manufacturing partners for Android One.