Be Harder To Hit In Counter Strike 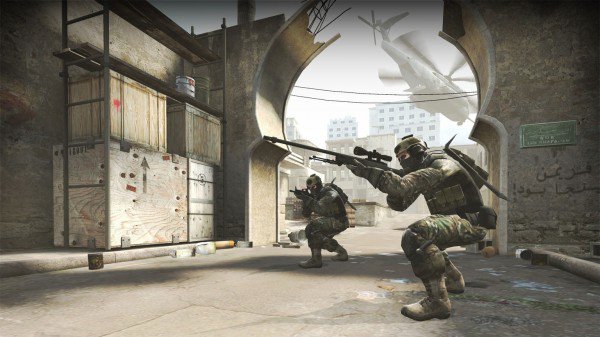 Counter Strike is different from other shooters in that when you die, you are out for the rest of the round. It makes the task of staying alive much more important than in normal death match games. There are some ways to avoid being an easy target for the opposite team. If you come down to 1 vs. 1 fight between you and other man/woman, you dont want to be easy to hit. Follow the simple steps below

Don't stay in one place during open long distance gunfights. Move from side to side, strafe around, and fire short 1-3 shot bursts at the enemy's head when you stop shortly between moves. It's never a good idea to stay in one place for a long time during fights, it will make you an easy target.

When you surprise an enemy from the front and they start spraying at you, be mobile and try and get around them. Crouch, dance back and forth, and jump on top of them, even switch to your pistol to increase your movement speed temporarily, do whatever it takes to avoid the gunfire.

Surprisingly, it's actually easier to outrun their spray when you're closer to them. It allows you the ability to run around them quicker. Why circle strafe 5 yards when you can strafe 1?

If you're out in the open, you're fair game for snipers and a lot of other things. Use cover during fights over long distance, move back and forth between cover and burst shooting. Just make sure to change up your pattern so they can't figure you out.

When the opposite team starts rolling out the smokes and flashes make sure you've got a retreat point you can maneuver to when you're blind. When they start kicking in the front door after they flash you, you don't want to be out where they can pick you off. Make sure your retreat point isn't too obvious either. When you can't find any retreat points to go to, it comes down to keeping mobile. Dodge back and forth, run, and crouch when you stop, even bunny hopping will be of use sometimes.

You're less likely to die if you stick together with your team. It's easier to take on a threat when you've got people watching your back. Just make sure you're going with the right group. You can't count on a squad of n00bs to watch your back, make sure to stick with the more experienced players.

Don't be a coward. It's okay to run away from certain situations, but if you run away from everything, it's going to come down to either you vs. the entire other team or you vs. that grenade bouncing your way.

Give help to your team-mates. Your team will last longer this way, and hence keep you alive too as a benefit. Plus, if you cheap out on your team, there will likely be quite a few team kills aimed at you in the coming rounds.

Know the maps that you play, and know the likely camping and sniping spots.

Be ready for anything. If you keep alert and think of the enemy's movements and tactics, you'll be less likely to be surprised by somebody jumping out at you with an ak spraying or a flash bouncing your way.

With an m4a1 without a silencer you can shoot 3 bullets at a time while moving. It's incredibly accurate like that and can dodge the bullets of your opponent.