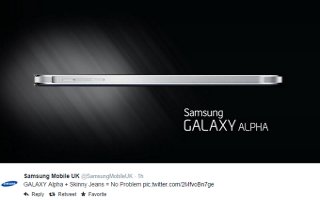 As we already reported the trending Bendgate issue on both iPhone 6 and iPhone 6 Plus, now Samsung hits Apple with a post on Twitter that "GALAXY Alpha + Skinny Jeans = No Problem". This post was did by official Samsung UKs Twitter page.

As the new iOS 8 released, the Apple is facing problems with users complaining of battery drain, data loss, and crazy data usage. However, in fairness this is a typical problem with Apple (and other platforms) updates when they update quite significantly.

Now Apple is being given a head ache with this trending #Bendgate posts on social media, as we already reported on this issue here; now the funny posts following on and trending through Social Media as well for those experiencing the problem Mobile Fun is selling a repair kit (seen in the picture below) for this issue.

It just seems Samsung could not help them in reveling a little longer in the now infamous issue with the new Apple device. You may wonder why Samsung decided to use the Alpha as opposed to the new Note devices. Well, this is clear, the Alpha is actually slimmer than the iPhone 6 Plus (6.7mm compared to 7.1mm) and so this is a way to add further insult to injury.

As a reminder, the Samsung Galaxy Alpha will be available in the US starting today, September 26, via AT&T (which asks $199.99 for it on contract).