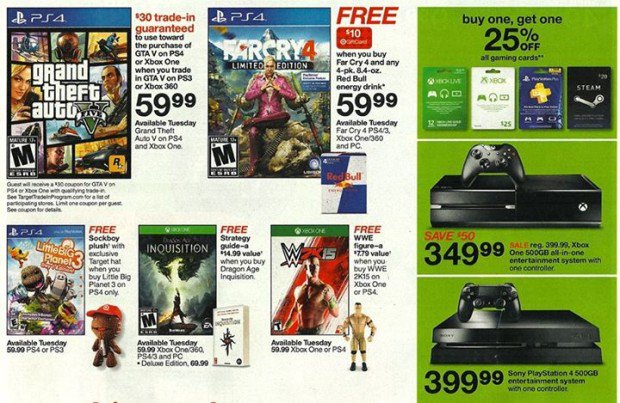 Gamers hoping for a GTA 5 trade-in deal need to take note as Target's leaked ad shows double the GTA 5 trade in value offered by Best Buy and GameStop for the PS3 and Xbox 360 GTA 5 disks.

There are several catches to this Xbox One and PS4 GTA 5 trade-in deal that you'll need to take note of, but for users who can join in, it's a great way to get the new GTA 5 release without paying full price again.

The Target ad, that should start during the week of November 16th or 17th, shows a $30 coupon towards the Xbox One and PS4 GTA 5 game when you trade in an old version. There does not appear to be any limitation to the trade-up deal in terms of consoles. There is a limit of one coupon per guest, but that's all most players need to get their GTA 5 deal for the new PS4 and Xbox One version.