T-Mobile officially announced today the release of Smasung S 4G by this month. This will be fastest 4G smartphone running on America's 4G Network. The Samsung S 4G is capable of delivering the download speed of 21 Mbps, it offers the enhanced mobile experience and entertainment and includes the mobile HD TV, the Academy Award nominated film Inception and T-Mobile video chat powered by Qik delivers 4G speed on 4-inch AMOLED touch screen display. Youtube and T-Mobile TV are the enhaced video entertainments. It is also includes free programs from select stations like ABC News, FOX Sports, Kids and Azteca America. 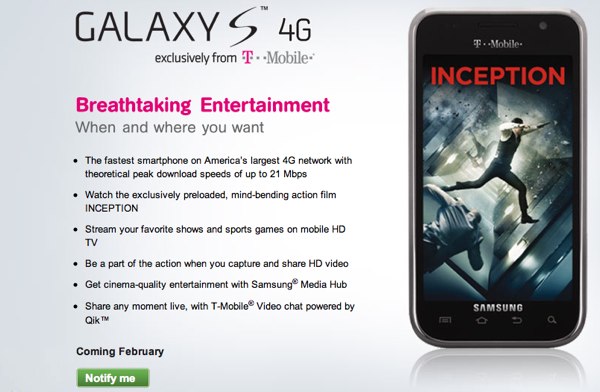 The free installed third party apps will include Kindle, doubleTwist with Airsync. It's battery capacity bumps to 1650 mAh, to counteract the effects of beefier radio. They haven't announced the date of release or price of the device yet. But, their official website says the mobile will be coming this February.

Here is the press release for you. Galaxy S 4G From T-Mobile to Offer Blazing-Fast Speeds and Unparalleled Entertainment Experience Featuring Movies, TV and Video Chat

The Galaxy S 4G is expected to be available to T-Mobile customers in February. Customers can visit http://galaxy-s.t-mobile.com/4G for more information.