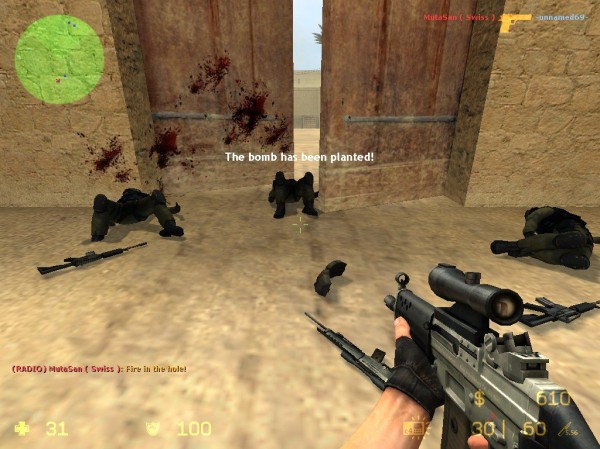 You can survive in Counter Strike Source. To stay alive, there are some ways to increase your chances of survival. Follow the simple steps below

Make sure that your system is up to the challenge. You need a good internet connection (1mb/sec) and at least a Pentium D or Core 2 processor with at least a 128 MB Graphics Card (256+ recommended). You should also have at least 1 GB RAM to minimize lag. You'll find that as your system improves, so will your score.

Make sure you are on the winning team. If you aren't on the winning team, disconnect and rejoin on the other team. (Note: This tactic, when the teams are unfair [I.E. joining a team with 10 players when the other has 8 or less] is called "stacking". Team stacking is not only unfair, it is considered cheap and will earn you hate of many of the decent players. Most servers these days autoteam balance, so even if you teamstack, you will be automatically switched to even the teams.) Teamstack is also known as "Lamejoin".

Buy only pistols until you have enough money to buy good weapons, if the winning team is full and not accepting new players.

Follow your teammates wherever they go, groups are harder to kill.

Use sound to your best advantage. Spend at least $30 on a pair of headphones ($40 if they come with a mic).

Sharpen your sense of timing. Jumping around a corner at the right second, or even better, waiting for someone to run past you will increase your odds dramatically.

Learn the weapons! Not all guns fire in the same way. Spend some time on an empty server and shoot the wall to become more comfortable handling them. Never hold the trigger! Shoot short bursts of bullets.

Aim for the head, and always keep your gun at head level. The time it takes to raise your weapon is enough for someone to get a shot in at you.