Samsung Galaxy Note 4 Released With Gapgate Issues On Some Units 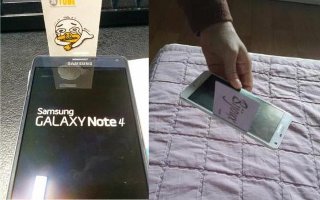 Samsung Galaxy Note 4 Released With Gapgate Issues On Some Units

Samsung was one of the first to attack Apple overBendgate issue and the company now embroiled in Gapgate with its new Galaxy Note 4.

IT Today is reporting that someGalaxy Note 4 users have noticed a space between the phablet's frame and its display panel. The gaps are large enough to fit pieces and a business card inside, as evidenced by the picture above. Its sources claim that Samsung is aware of the issue, although the company hasn't publicly acknowledged it yet.

It's not know how widespread the Samsung Galaxy Note 4 Gapgate issue is, but the company comes up with a solution before the phablet hits the U.S. on Oct 17.