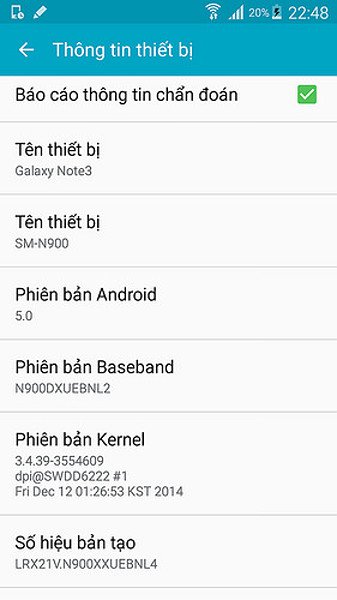 A few days ago we saw a couple of screenshots that seemed to show a SM-N900U unit, which is an Exynos Galaxy Note 3 running Android 5.0 Lollipop. The almost incredible story was courtesy of a samsungviet forum member, who allegedly got hold of the ROM thanks to an error on the website samsung-updates.

The whole story had serious holes in it and sounded very far-fetched, but now it appears that it might just be true as the thread covering the accident on XDA now offers a download link along with a full set of instructions for a manual flash.

So the update seems to be as real as it gets, but unsurprisingly it is an early beta, that just happened to accidentally slip through the cracks. Screenshots seem to showcase a white menu background which looks like a very poor choice as it might cause the Super AMOLED display to draw way more power than it needs to. Hopefully Samsung will address this issue before the official OTA hits.

The leaked version of Android Lollipop does seem to be functioning, but reading through the XDA forum is appears to be riddled with bugs, which of course is expected from a beta not intended in any way for public use.

This however does not seem to affect the enthusiasm among a few XDA users who have not only flashed the new ROM, but have also managed to apply a few quick "homebrew" fixes to remedy certain crash issues and a major problem with Bluetooth connectivity.

It appears that Lollipop on the Galaxy Note 3 is drawing ever closer. We are yet to see any information regarding the most wide-spread variant of the device - the Snapdragon 800 SM-N9005, but progress on that shouldn't be far behind. If you happen to own a N900U unit and feel adventurous you can head over to XDA, to get the needed files and instructions to apply the update.

For installing Lollipop for your rooted Galaxy Note 3; click here