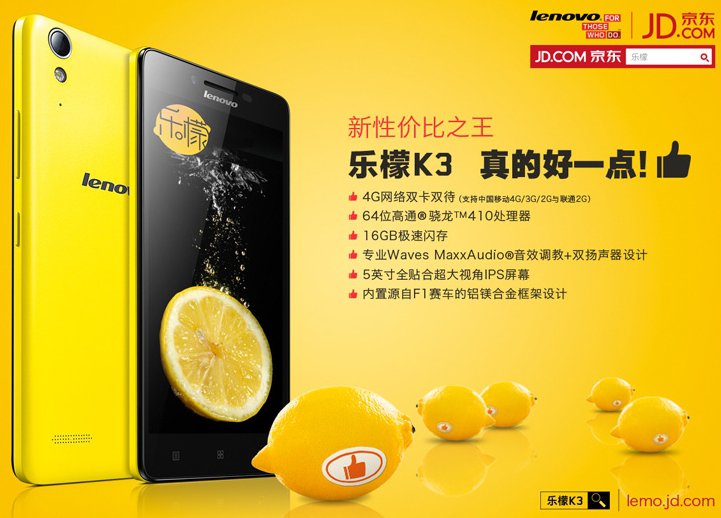 Today Lenovo unofficially unveiled a new budget smartphone with a rather silly code name - Lenovo K3 "Music Lemon". The device appeared on JD, one of China's largest retailers, and it seems it will be offered exclusively by them only online, much like Xiaomi handsets.

The reasons behind such a marketing strategy are plentiful, especially for budget phones, but one does also get the feeling that Lenovo is launching a contra offensive against Xiaomi's Redmi 1S in particular.

The Lenovo K3 is a solid entry level smartphone with a more than attractive price tag of CNY599, or roughly $97. For that you get a quad-core Snapdragon 410 SoC, clocked at 1.2GHz, 1GB of RAM and 16GB onboard storage plus a card slot. When you throw in a 5 inch 1280*720 pixel IPS display, LTE and two decent cameras (8 MP main and 2 MP front) you do get an obviously superior hardware platform, than the one inside the rival Xiaomi Redmi 1S.

The "Music Lemon", as its name hints, features a vibrant yellow back, although it seems to have little to no other apparent connection to lemons or music for that matter, besides perhaps the inclusion of Waves MaxxAudio sound tech. The device measures 141*70.5*7.9mm and is powered by a 2300mAh battery.

It seems that for now the device will be available only in China, but with such a compelling price tag, perhaps Lenovo will decide to push it, or at least a similar smartphone to foreign markets as well.