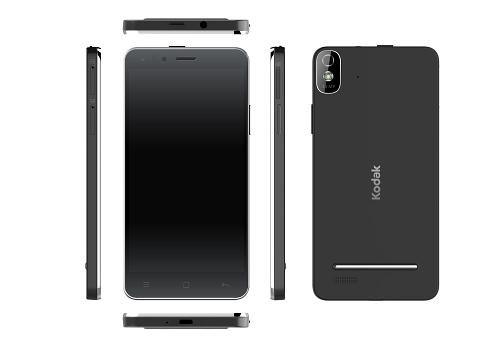 Kodak has unveiled today is less of a camera running Android, and more of an actual smartphone. It looks like one and has smartphone specs, so it's definitely (just) a smartphone.

The Kodak IM5 comes with midrange innards mostly, except for the camera which features "unique image management software". More on that in a bit. The handset has a 5-inch 720p touchscreen, a 13 MP rear snapper with LED flash, a 5 MP front camera, 1GB of RAM, 8GB of built-in storage, and microSD card support.

Running the show is an unnamed 1.7 GHz octa-core processor, though the clock speed makes us think it's part of a MediaTek chipset (probably the MT6592). The Kodak IM5 runs Android 4.4 KitKat, and it will be updated to Android 5.0 Lollipop, even if a clear timeline for that hasn't been given (or a reason for it not launching with the latest software in the first place).

Expect the IM5 to become available in Europe towards the end of March, followed by a global rollout later on. It will cost 229, and when it eventually lands in the US you'll be able to pick one up for $249 (sans contract of course). Camera-wise, you'll get an app that will let you quickly edit photos, share them on social media, or directly print them, since it's apparently going to be "compatible with home printers".