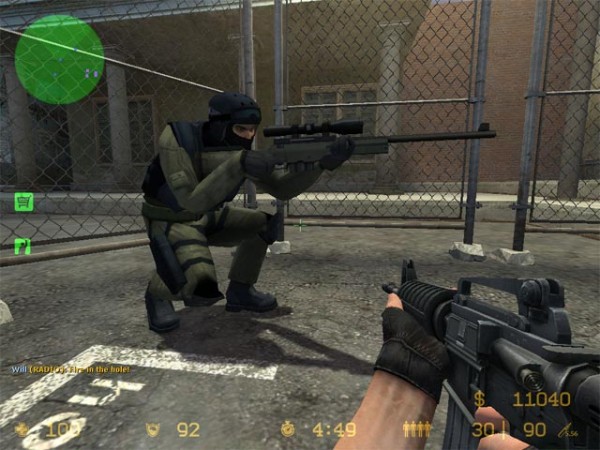 Tired of getting killed in Counter-Strike? Well, I have plenty of steps to guide you to be a better player. I do not guarantee you to get better right after you read this; you do need a lot of practice and patience. Follow the simple steps below

Do not use up all of your money every round. Every good player goes two or three rounds without buying a single thing. This saves money to buy a better gun. If your team wins, that's even better for you! If you're ranging between $0-$1,500, do not buy anything. You want to save money untill you have atleast $3,000. If you're a CT, you always want to buy a defusal kit first. You can always use the extra points/money. It's perfect for those times you wish you had the kit. They're not expensive; you always have enough for one.

Avoid the spam areas or the places in the map where most deaths occur. If you do not have a decent gun, there is no need to get into a gun fight. It's best to avoid being detected. Camp when necessary, don't camp around if it's not strategical! That only bothers the players that are dead. If you're left with a few players, walk. Most players will just keep running along and expect to hear everybody. If you walk, this increases your chances of getting the first shot. Wear headphones and listen to sounds! Listen to footsteps, grenades, and gunfire! Think smart. Don't jump out too early, sneak around! Manuever around boxes/walls to avoid them from seeing you. This works well with CT's. Hide in a bombsite, and wait for them to start planting and them come out of your hiding spot to shoot them. They won't have enough time to get a gun out. Be sure to stay covered, if possible. You need to avoid flashes! When climbing ladders, crouch. It doesn't make as much noise.

Don't spray! Aim precisely and always shoot for the head! If you're in a situation where you see the enemy, but they don't see you, don't spray or shoot around. Wait for that perfect headshot. If they don't see you, take advantage of that time to get a precise shot. Practice your aiming and don't take too long to shoot.You wouldn't want to just hold on fire button, you should get used to tapping it. Move the mouse in the opposite direction of recoil. This prevents it from kicking around as much.

When using the AWP, always stop or crouch just before shooting as shooting while moving with the awp gives you NO accuracy.

If you're in a pub, try sticking around with the best player on the team. If there's not an experienced player, try to stick with the team. You can't really find good team work in pubs anyway, but it's best to be with a group than to die alone. Oh, and try not to stack the teams. It only annoys the people on the server. Play smart and don't try anything stupid. If you're a CT on a bomb map, stay at the bombsites. Don't waste time in the Terrorists' spawning area.

Do not talk with other players, unless it is working as a team to get the objective done. Don't act immature or complain if you die. Learn to accept the fact that there are people better than you. It's about the fun. There's no need to attack other players verbally. It just makes you look like an idiot. If you're gonna say something, just say it inside your head and try to correct your mistakes. You get better over time, lots of time. It takes years to get good. Once you're experienced, try joining CAL with a clan.