How To Use Playlists On iPad Mini 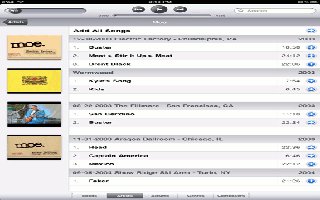 How To Use Playlists On iPad Mini

Learn how to use playlists and Genius Playlist on your iPad Mini.

New and changed playlists are copied to your iTunes library the next time you sync iPad with your computer, or via iCloud if youve subscribed to iTunes Match.

The song is deleted from iPad, but not from your iTunes library on your Mac or PC, or from iCloud. When iTunes Match is turned on, you cant delete music. If space is needed, iTunes Match removes music for you, starting with the oldest and least played songs.

The Genius Playlist is added to your playlists, following the Genius Mixes.

Genius playlists created on iPad are copied to your computer when you sync with iTunes.

Note: Once a Genius playlist is synced to iTunes, you cant delete it directly from iPad. Use iTunes to edit the playlist name, stop syncing, or delete the playlist.

Siri for Music on iPad

You can use Siri (iPad 3rd generation or later) to control music playback. See How to use Siri.

Use Siri to play music: Press and hold the Home button.

Note: This article will work on all iPads using iOS 6; including iPad Mini, iPad 2, The New iPad (iPad 3), iPad 4 (iPad with Retina display).