You can share pictures via Share shot and S Beam on Samsung Galaxy Note 2. Pictures are the best way of remembering the moment, but an even better treat is to share them with others. Two new features allow you to either instantly share a series of pictures as they are taken or quickly share a picture without using email or messaging.

Note: You can only share a shot with other external users who also have their Wi-Fi Direct feature active.

S Beam Transfer uses the NFC (near Field Communication) feature found on your device to transmit large files directly to another compatible device by direct touch. This method of image transfer requires NFC and S Beam to be enabled prior to use.

How to enable Share Shot on Samsung Galaxy Note 2

Share shot is a Wi-Fi Direct group sharing feature where multiple users can Wi-Fi connect their devices and then all share each others pictures in real-time. This is really useful in group events (ex: family gathering or company party) where you dont want to have to email everyone later and make sure you all can share your pics at a later date.

The general process is:

Note: The target device must also have Wi-Fi Direct service active and running before it can be detected by your device.

This feature (when activated via NFC) allows you to beam large files directly to another compatible device that is in direct contact. These files can be larger, such as Videos, HD pictures, and other large files.You can beam images and videos from your gallery, music files from your music player, and more. 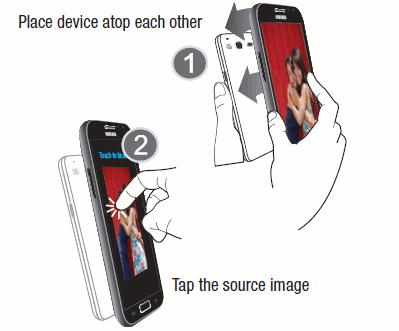 Note: Neither device must be in Lock mode or displaying the Lock screen. They must both be active and unlocked. It is recommended that the target device be on the Home screen.