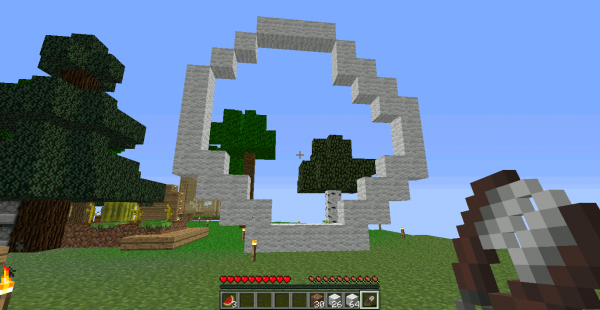 You can find yourself on spending days on playing Minecraft, there is actual point to the game. Warning: This step may take a very long time. Follow the simple steps below

Search for a stronghold, an underground fortress that has multiple rooms and is mostly composed of the three variants of stone brick (mossy, cracked, normal), but what you are searching for is a frame of blocks of blue and yellow with a hole in the middle.

Next, secure the location. Just set up camp next to the tunnel.

Find obsidian. 20 obsidian them at least.

Build a portal. Use flint and steel on one of the blocks.

Now that you see the purple swirly stuff, step in the frame and wait.

Once you've teleported, search around for some ruins constructed of red brick. These are much less rare than strongholds.

Next, once you are in, look for a room with a monster spawner.

Next, craft them into blaze powder by just putting them in a single crafting grid.

Kill enderman and get some Ender pearls.

Craft Eyes Of Ender out of blaze powder and Ender pearls.

Get twelve to fit in all the frame blocks.

Jump in the portal that looks like space. (Don't worry about the lava pit.)

Look around for a dragon in the new dimension known as the End.

Destroy the weird things, known as Ender Crystals, on top on the obsidian towers; they heal the dragon.

Kill the dragon. You will have to wait until it swoops down to you, then hit its face with a sword. Or, you can shoot it with a bow and arrow. Shoot at the legs or the head, since the other parts will not harm it.

Go on the bedrock portal it makes when it dies. Don't go in the portal.

Pull out your sword.

Get the egg. Still do not go in the portal.

Go in the portal. You win!