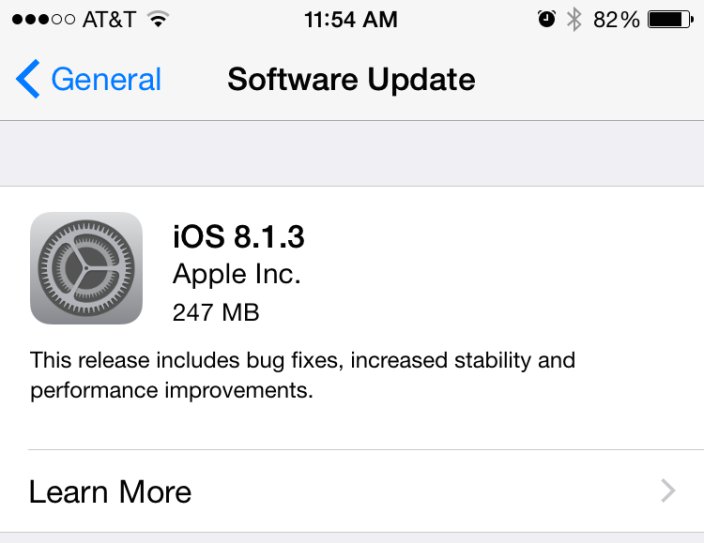 Apple has released the latest software updates for both its mobile and computer operating systems. iOS 8.1.3 is now rolling out with a handful of bug fixes in tow. Perhaps the most important thing that it changes is the amount of space you need on your iPhone or iPad to be free before you perform such an update.

This should ensure that more people will be able to seamlessly stay up to date in the future. Many were unable to make the jump to iOS 8 specifically because of this issue, while others had to pretty much delete everything on their devices to perform the procedure. Obviously, phones with 8GB of storage were most affected, but devices with 16GB of space weren’t immune either.

The iOS 8.1.3 update comes in at around 250MB on an iPhone 6 and iPhone 6 Plus, but the exact size of the update will vary depending on device. It also fixes a problem with entering the Apple ID password in Messages and FaceTime, addresses an issue with Spotlight, and one that prevented multitasking gestures from working on iPads.

At the same time, Apple has made Mac OS X Yosemite 10.10.2 available. This is also primarily a bug fixing release, so there’s just one small new feature tow – namely, the ability to browse iCloud Drive in Time Machine has been added.

This update is expected to fix quite a few issues, from Wi-Fi disconnects to Web pages loading slowly, to unexpectedly having languages switched. The newest version of Mac OS also addresses some problems with Spotlight, VoiceOver speech performance, and Safari stability and security. Audio and video sync when using Bluetooth headphones has been improved too.