Android One Version Of Moto X4 Gets Android 8.0 Oreo Update

If you own the Android One variant of the Motorola Moto X4, then we have a good news for you. The smartphone is now receiving the Android 8.0 Oreo update along with the latest security patch.

The new update has a build number of OPW27.1. The over-the-air (OTA) update is rolling out as we speak so it may take some time to reach all devices.

Hi there. The OTA update is released in batches and your device should receive it soon. Appreciate your patience!

Google announced Android One for the United States in late September, with the Moto X4 going on sale a month later in October. The device shipped with 7.1 Nougat and a "pure Android experience" that receives monthly security patches.

At the launch of the latest variant of the One initiative, Google guaranteed that the device would receive Oreo before year's end and Android P in 2018.

Now that the update is being rolled out Moto X4 Android One Edition users should receive a notification to download and install the update. If not they should keep a close tab on the notifications panel. Users can also check for the Oreo update manually by going to the "Settings" menu. They can then click "About phone" and then tap "System updates" to check for the latest update. 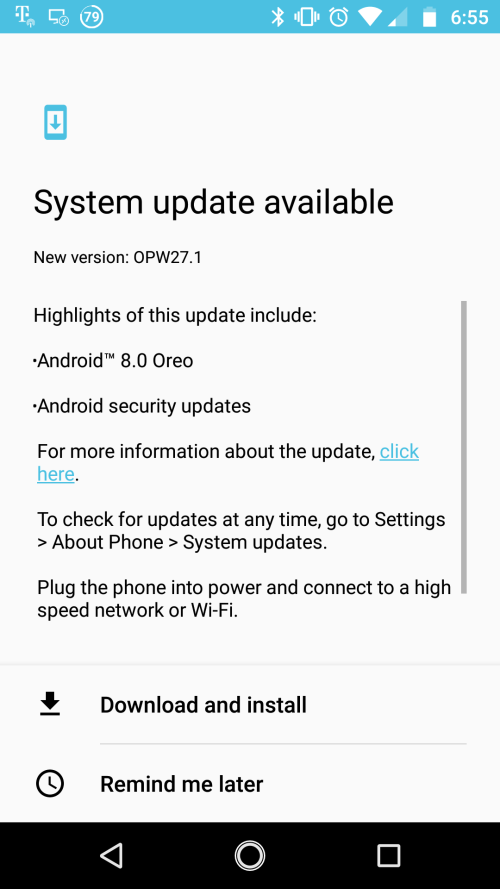 At over 1 GB the update, the update is huge and we advise users to have an ample amount of battery life on their smartphone - at least 50 percent. It is advised to back up data before the installation and users should connect to a high-speed network of Wi-Fi to download the update as extra charges may be applied when using a carrier network.

The update contains the December security patch in addition to all of the new features introduced with 8.0 Oreo, including Picture-in-picture, Notification dots, Autofill, and the latest emoji, along with several performance enhancements.