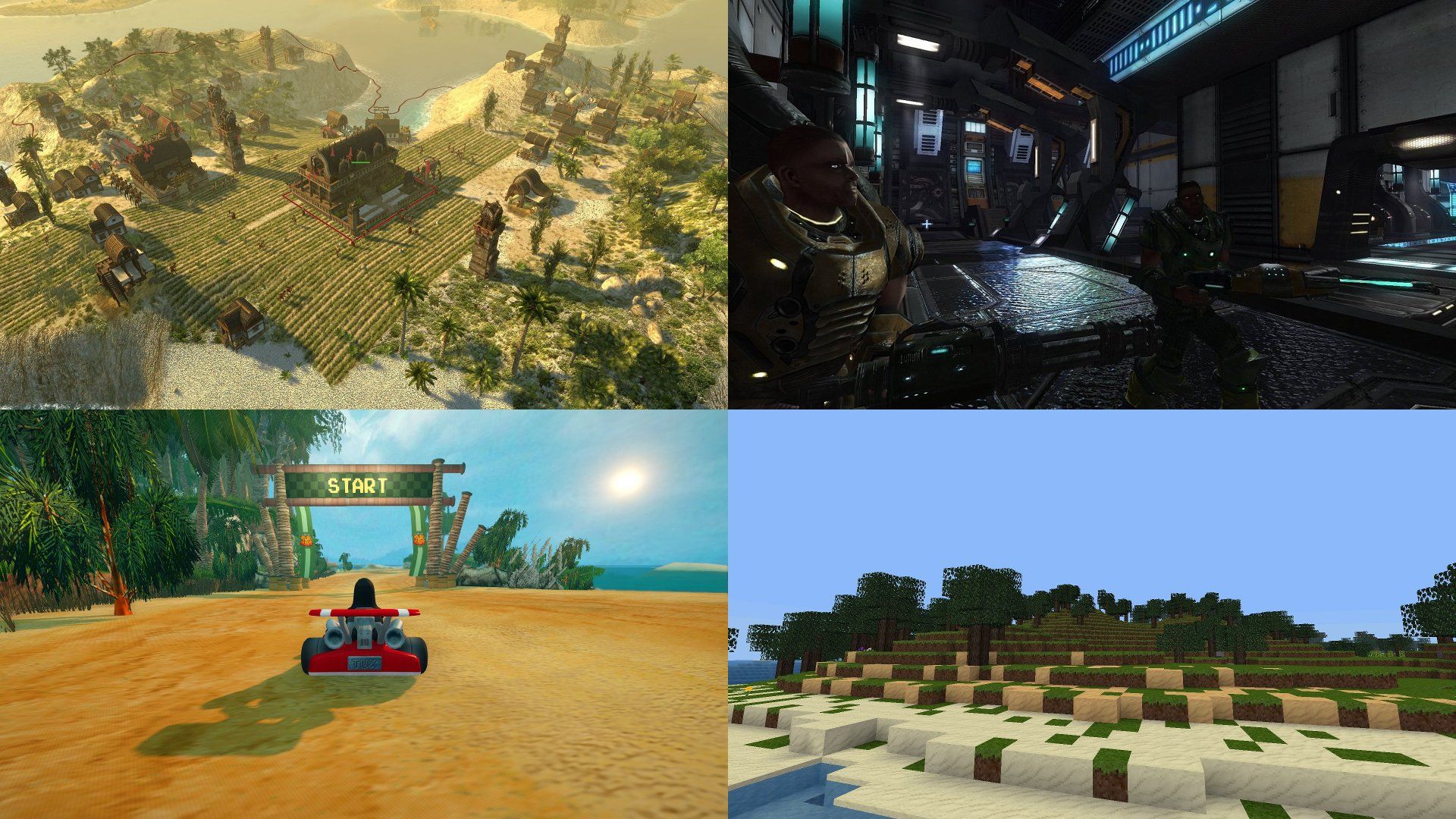 While Linux struggles to reach even a 3% market share, Linux games continue to grow. Thanks to Valve for bringing Steam, we are now seeing an influx of AAA games to our favorite platform. However, having so many games has reduced visibility on many good, free, and open source games.

We have a nice collection of 10 free and open source games for Linux that has most addictive, fun, and refined games. All the games in our list have received updates within the last year and supports multiple platforms including Windows. In addition, the games belong to many genres including strategy, simulation, and shooters.

Without further ado, here is the list of open source games in no particular order.

0 A.D. (pronounced "zero ey-dee") is a free, open-source, cross-platform historical real-time strategy (RTS) game of ancient warfare that is set between the years 500 BC to 500 AD. This game is originally intended to be a modification to Microsoft's popular Age of Empires II, which explains the similar look and feel to the gameplay. It really is a very high quality open source project that has successfully built a huge community around it.

The project is highly ambitious, involving state-of-the-art 3D graphics, detailed artwork, sound, and a flexible and powerful custom-built game engine. Not only are the graphics impressive, but the game also tries to be as historically accurate as possible, filling you in on ancient history as you go.

Currently, the game has 9 civilizations with their own buildings, units and special technology. Moreover, the developers have promised to add more civilizations in future expansion packs including the Germanics, Vandals, Sarmatians, Late Rome, Imperial Rome, Eastern Rome (Early Byzantines), Saxons, Parthians, Huns, Dacians, and the Goths.

If you are a fan of RTS games like Age of Empires, then you must try this game. The game is still in development, but the alpha releases of 0 A.D are more stable to play. This ambitious project is certainly worth keeping a close eye on.

OpenTTD is an open source simulation game based upon the popular Microprose game "Transport Tycoon Deluxe", by Chris Sawyer. The game tries to mimic the original game as closely as possible while extending it with new features that enhances the game experience dramatically.

In this game, you start as an entrepreneur, and your goal is to make as much profit as possible by transporting passengers and various goods by road, rail, sea, and air. The game also supports multiplayer mode for up to 255 players in 15 companies, or as spectators. It also has tons of mods that brings new AI, graphics, vehicles, industries and more.

People who are new to the franchise may be turned down by all the 2D sprite graphics. However, looks are not everything. The gameplay is fun, addictive and eats your free time like nothing. This is one of the best transport tycoon game out there (better than anything you will find on Steam or elsewhere) and it is free.

The Battle for Wesnoth is a free, turn-based tactical strategy game with a high fantasy theme, featuring both single-player, and online multiplayer combat. The game features a large assortment of maps, classes, units, and campaigns. Community add-ons are available in-game for download, and it also has a random map generator.

Set in a fantasy world with 16 races and 6 factions, the game has over 200 units with different types of weapons and abilities. The current stable version of Battle for Wesnoth has 16 campaigns. The game also supports online play for you to challenge up to 8 of your friends.

Another RTS game, but this time focused on modern/futuristic combat. OpenRA tries to modernize and recreate the original Command and Conquer games -- mostly the first C&C Red Alert game.

The game brings new features and gameplay improvements, support for online multiplayer and comes bundled with three distinct mods. When you run a mod for the first time the game can automatically download the original game assets, or you can use the original game disks.

Currently OpenRA comes includes mods that add the following C&C games -- Tiberian Dawn, Red Alert, Dune 2000. Although the game has mods for Tiberian Sun and Red Alert 2, they are not completed and the developers are planning to include them in future releases.

Minetest is an open source alternative to Minecraft with similar gameplay. You can create and remove various types of blocks in a 3D open world.  Minetest supports single player and multiplayer games. Minetest also includes many features, such as support for mods, texture packs, and more.

SuperTuxKart is an arcade racer with a variety characters, tracks, and modes to play that is similar to Mario Kart. You can play with up to 4 friends on one PC, racing against each other or just try to beat the computer.

A major update for SuperTuxKart was its 0.9 release in April 2015. This release includes an entirely new graphics renderer dubbed Antarctica, which enabled better graphics appearance and features such as dynamic lighting, ambient occlusion, depth of field, global illumination, and more.

Recently, the game got greenlit in Steam and will soon be available for download.

Based on the now dead Nexuiz, Xonotic is the gem that shines in the most overcrowded category in Linux gaming. It features all the good vulgar gameplay characteristics of Nexuiz, while trying to evolve into something even greater and more modern.

This addictive, arena-style first person shooter offers crisp movement and a wide array of weapons. Currently, Xonotic offers all the classic game modes found on most FPS games and also includes some more unique in nature. The gameplay is damn fast and intense. Speed and precision are the main principles of the good Xonotic player.

The game has its own integrated player statistics application, XonStat, using which you can track your progress, see vital stats like your kill:death ratio, weapon damage and accuracy, and recent games. Tracking is completely opt-in, and no login is required. In addition, you can even edit the information on your screen to what you are used to with our easy to use HUD editor.

The game features an internal server browser for finding other players online, and has a built-in IRC client for chat between players. The game uses modified Quake II physics. Most Quake II trick jumps, such as strafe jumping, will work in Alien Arena. However, dodging, which is not found in Quake II, has also been added to the game.

The game is a unique FPS in that there is no gore. Warsow has no blood or guts flying around. Red stars instead of blood indicate hits and colored cubes replace guts as gib effects.

The game is very competitive and aims to provide adrenaline rushing multi-player fun. Some of the movement physics and certain running-modes implementation have greatly affected other games of the kind. Warsow is a very well-made game and a truly unique arena shooter!

Freeciv is the Free and Open Source turn-based strategy game. It is a remake of the most addictive and critically acclaimed Civilization series, which is inspired by the history of human civilization.

Freeciv supports multiplayer gameplay with up to 126 players. It has over 50 playable units and 550 nations and support modding -- allowing you create your own nation sets, rule sets, tile sets, and so on.

A map and scenario editor called Civworld is also available as a download. This is one game we will still be playing in 20 years' time.