A bizarre high-tech bra prototype inspired by "Frozen" needs two people to touch each other to change colors and patterns. That's not the case with the Close Sisters Bras from Japanese lingerie maker Triumph. The bras sport a dark polka-dot or heart-dot pattern until one wearer comes into contact with another wearer. Then, the bras change over into a white and blue snowflake pattern. The wintery theme stems from the film "Frozen," which seems to have inspired the wearable creations. 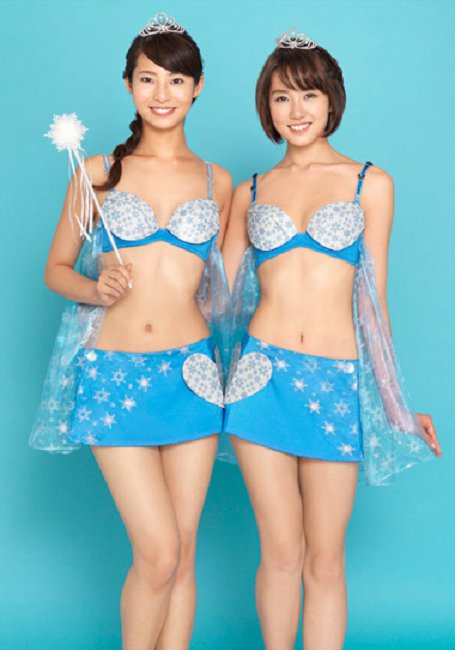 "Frozen" features two Disney princesses, which explains the buddy aspect of the Close Sisters Bras. The bras come with matching short skirts with heart shapes on the hips. As demonstrated by two models, bumping hips and getting close causes the electronic paper making up the bras to change colors. The bras also come with little padded pink hearts for adding extra bust volume.

Triumph says that, with powerful productions such as Frozen, "The depictions, in movies and the like, of sisters helping each other and becoming more confident, have moved all of Japan." But aside from the princess and snowflakes theme being presented here, we're having a hard time finding a connection between the Close Sister Bras and Disney's movie.