Start A Massacre On GTA 4 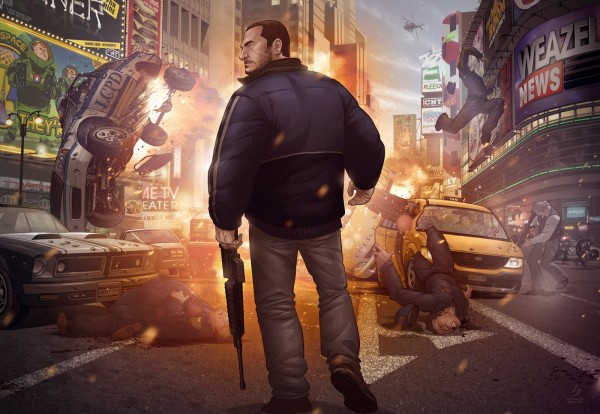 You can start a massacre on GTA 4. Follow the simple steps below

Walk into a hospital with a pistol, some grenades, an SMG, and a baseball bat.

Go to the nearest person you see and bat him a few times and do this to a few other people.

When you have at least a two star wanted level get out the pistol and wait for the police to arrive.

Then start shooting at the police and pick one or two of them off to get a three star wanted level.

Then retreat into the hospital and start shooting at some doctors and patients to rack up some wanted stars.

Go back to the entrance and you may see some seriously armed police.

Then whip out the SMG and start nailing the rest of the police.

You may blow up some cars to get the fire brigade out as well as the paramedics.

Get the grenades and start lobbing a few in their direction.

Go to Happiness Island on a helicopter.

Begin shooting bystanders, prioritizing police officer, but not hitting vendors. (These can be used for health pick-me-ups)

Continue until a three star wanted rating is gained.

A helicopter will come. Use a sniper rifle to shoot down the pilot in it. Don't bother with the gunmen, the pilot will fly off when the gunmen are gone.

When a four star wanted rating is gained, heavily armed FIB members will come with a Gatling cannon on the front.

This is a good way to gain a six star wanted rating with little danger. Upon gaining the wanted level of attention, use the parked helicopter and fly to the mainland.