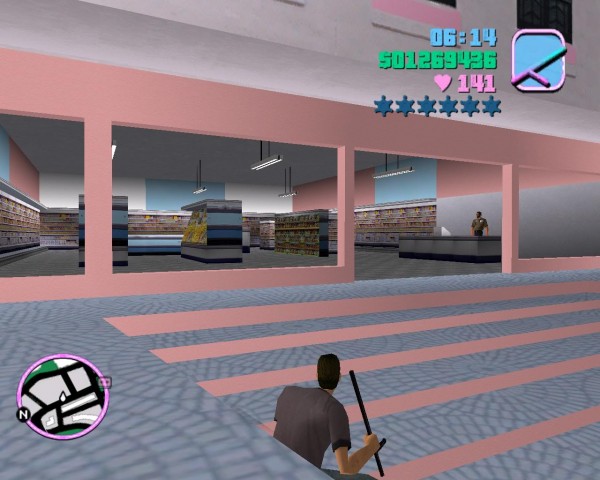 You can rob stores on GTA Vice City by pointing gun on the shop owners. It requires 100% completion, but it allows gives you a nice amount of money, if you are starting off in the game. Follow the simple steps below

Obtain a gun with a lock-on target mechanism. Suitable guns include pistols, sub-machine guns, or shotguns.

Drive to a store that can be robbed. There are 15 stores to be robbed. See the next section for a detailed list of available stores.

Walk into the store and find the store owner. He is usually wearing a brown shirt and glasses and found behind the checkout counter.

Collect the money and quickly leave the store. You only have to take one stack for it to count on your stats, but you can get away with $1000 if you're able to shake off your three-star wanted level.

Get rid of your wanted level. You can visit a Pay 'n Spray, find police bribes, change your clothes, or just wait it off (if it's only one star).