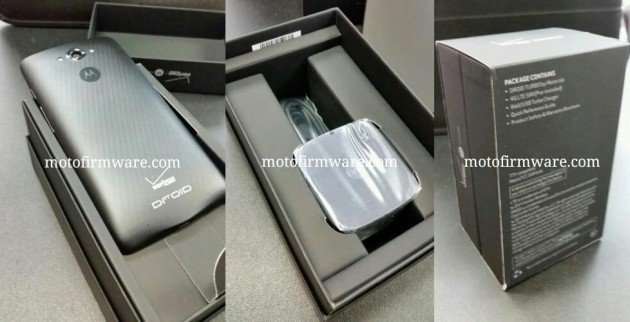 Live images of retail package of Motorola Droid Turbo leaked on Twitter. The Smartphone is set for Verizon Wireless release on October 28th.

As we first reported on image leak and Verizon countdown for the smartphone, now several photos of the DROID Turbos retail box and the goodies that are packed inside have been shared by the folks at MotoFirmware. Interestingly, Verizon and Motorola have included the Motorola Turbo Charger, which ought to help you quickly juice up the phones large 3900mAh battery.

The Verizon Droid Turbo will feature a 5.2-inch ultrasharp 2560 * 1440 Quad HD display and it will run a vanilla version of Android 4.4.4 KitKat (meaning hardly any customizations). It's powered by a very fast 2.65-GHz quad-core Qualcomm Snapdragon 805 processor, Adreno 420 GPU (graphics processing unit), and has 3 GB of RAM. It got a 21MP rear camera with dual-LED flash and front-facing camera for selfies and video chat. The smartphone will support wireless charging out of the box and it will feature a very large 3,900 mAh battery.