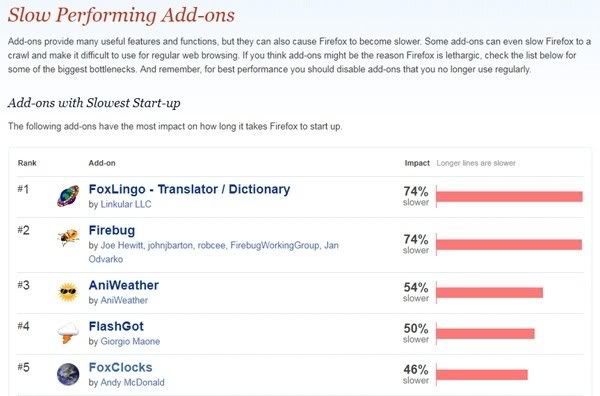 Mozilla is feeling the heat now, it spends every time in tweaking and perfecting Firefox to eek out as much as performance as possible, but its all ruined by lousy add-ons that weighing the browser down like a block of cement. It has now gone far to publish a list of slow performing add-ons that exposes the worst offenders. The biggest drags on the browser are FoxLingo Translator/ dictionary and Firebug developer tool add-on. According to Mozilla, each makes the Firefox 74% slower to start up. This is the list of the poor performing add-ons. Mozilla says its also institute automated performance testing of the top 100 add-ons in its gallery, and that it will begin reaching out to the developers directly to get them to improve performance.