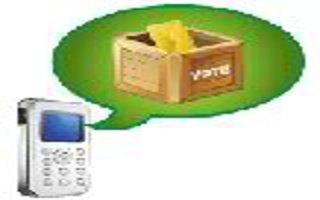 Polling disrupted by militants in J&K

during the election times.

Can you imagine an election without the booth capture, without firing of polling stations, clashes between parties, voting without long standing queues, without the ferry service to vote, voter friendly, with an increased voting rate. Yes that day is not far from here.

Here in this paper we are going to simply the voting process. In this hi-tech era the mobile phones attached with the iris scanner has to be used to cast the votes. Of course this m-voting reduces the time, cost, risks. The Iris recognition technology will pace our thoughts with higher degree of authentication.

WHEN IT WILL BE MOBILISED?????

M-voting is the technique of casting the votes through the cell phones .The iris scanner wills checks the person for the validity. The eye patterns will transmitted to the server. After getting the permission from the person can vote by pressing the keys. This m-voting can have access anywhere from the world with the help of satellite communications.

Large troops of military and Para military forces are employed for security purposes. Its a drain to our economy. The main stress on Ec being the protection of ballot boxes, EVMs. On the day of counting, higher security is needed.

People have to stand in lengthy queues in hot sun some times in rains. Old age persons have to face more troubles. Remote area peoples have to travel by boats, horses, bulls and even elephants. These factors reduce the voting rate.

Hence the combination of mobile communication and the biometric techniques paves the way for new generation of voting. Hence we can expect GOOD DEMOCRACY can flourish in the country.

The person who is going to vote has to call to Election commission office and then he/she has to show the eye for a fraction of second. The photographed eye will be transmitted to the office and it is processed for the validity, authentication. After getting the permission the person can vote to the desired candidate.

The figure shows the location of iris in the human eye 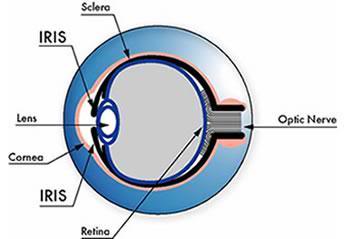 The voting process consists of

All these leads to the success of democracy.

On prior to the election the public has to enroll their iris pattern with the main server provided by the election commission. It may be at the district head quarters, municipal office, etc. This registration can be done once throughout the life. The database containing the iris pattern along with the personal data will has to be kept confidential. Here the camera takes a photograph and generates the iris code. The distance between the camera and the eye can be 4 to 24 inches. This stage alone needs the human work.

Behavioral characteristics is the reflection of make up

The person who is going to vote has to make a call to the number provided by EC with his iris scanner attached cell phones. Then they have to have an glance at the camera. To record an individual's iris code, a black-and-white video camera uses 30 frames per second to zoom in on the eye and "grab" a sharp image of the iris

A low-level incandescent light illuminates the iris so the video camera can focus on it, but the light is barely noticeable and used strictly to assist the camera. One of the frames is then digitized then transmitted and stored in a PC database of enrolled users. The whole procedure takes less than a few seconds, and can be fully computerized. Scanning is actually performed since the eye is simply photographed.

An iris has a mesh-like texture to it, with numerous overlays and patterns that can measured by the computer. The iris-recognition software uses about 260 "degrees of freedom.

Glasses and contact lenses, even colored ones, do not interfere with the process. In addition, recent medical advances such as refractive surgery; cataract surgery and cornea transplants do not change the iris' characteristics. In fact, it is impossible to modify the iris without risking blindness. And even a blind person can participate. As long as a sightless eye has an iris, that eye can be identified by iris recognition. Even the best fingerprint technology uses about 60 to 70 degrees of freedom.

The picture of an eye is first processed by software that localizes the inner and outer boundaries of the iris, and the eyelid contours, in order to extract just the iris portion. Eyelashes and reflections that may cover parts of the iris are detected and discounted. Sophisticated mathematical software then encodes the iris pattern by a process called Demodulation. This creates a phase code for the texture sequence in the iris, similar to a DNA sequence code. The Demodulation process uses functions called 2-D wavelets that make a very compact yet complete description of the iris pattern, regardless of its size and pupil dilation, in just 512 bytes. The stored file is only 512 bytes with a resolution of 640 x 480, allowing for massive storage on a computer's hard drive.

The phase sequence is called an Iris Code template, and it captures the unique features of an iris in a robust way that allows easy and very rapid comparisons against large databases of other templates. The Iris Code template is immediately encrypted to eliminate the possibility of identity theft and to maximize security. 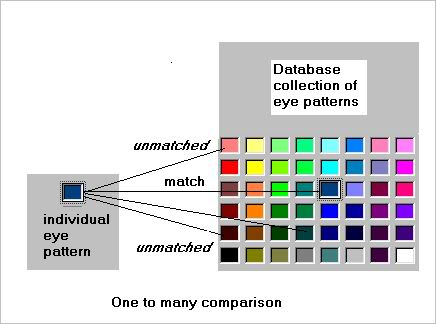 In less than a few seconds, even on a database of millions of records, the Iris Code template generated from a live image is compared to previously enrolled ones to see if it matches any of them. The decision threshold is automatically adjusted for the size of the search database to ensure that no false matches occur even when huge numbers of Iris Code templates are being compared with the live one.

Some of the bits in an Iris Code template signify if some data is corrupted (for example by reflections, or contact lens boundaries), so that it does not influence the process, and only valid data is compared. Decision thresholds take account of the amount of visible iris data, and the matching operation compensates for any tilt of the iris.

A key advantage of iris recognition is its ability to perform identification using a one-to-all search of a database, with no limitation on the number of Iris Code records and no requirement for a user first to claim an identity, for example with a card. 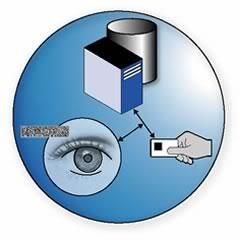 The server provided at the polling station will verify the iris code with the database and then it verifies whether they had already voted. If they are eligible to vote the server permits them to register their vote through their cell phone.

This shows the path of sampling, verification, and permission for voting 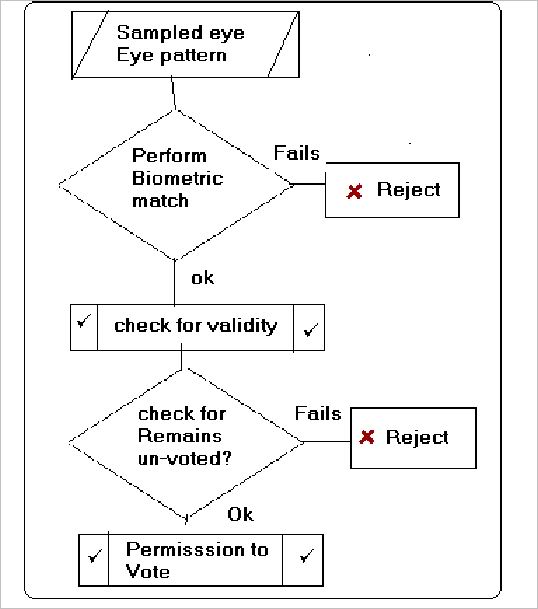 The success of democracy lies here. After getting the permission from the Ec server the person can vote from his mobile by pressing the keys. The prerecorded voice message will help to select the candidate. The photographs of the candidates along with their symbols can be displayed in the camera. So that a right choice can be made.

This can be used for citizenship rights, border-crossing permissions, passports, and even for ATM services.

We have presented a newer approach to the voting process, which will surely bring a change. We can reach the dream day, the peaceful election in which everyone can participate without any discrimination, threats, and risks. Dream day is nearer