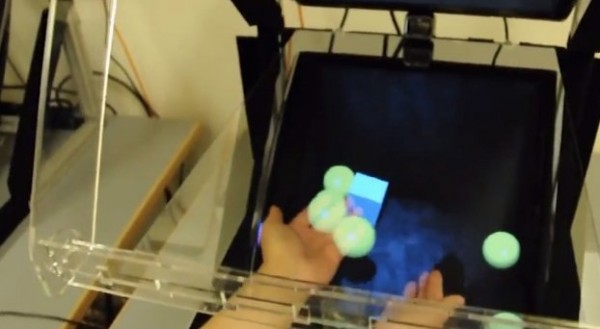 Microsoft Research, the arm of Microsoft that's seemingly from the future, has been busy creating what it has called a HoloDesk - a display, which allows a user to interact with digital objects.

A video demo of the concept desk is impressive and shows off the technology that's behind the kit.

Using a webcam, a beam-splitter and some facial recognition technology, the HoloDesk creates the illusion that objects on a screen are actually projected on a desk below. The user can then play with these projections as if they are real objects.

In the video, one of the demos is of someone playing with juggling balls that aren't actually there.

The concept is never likely to hit shops Microsoft is having a hard enough job explaining the use of Surface to the general public but this could be the kernel of an idea that in the future is used by engineers and the like, or anyone that wants more interaction with 3D objects.

Microsoft Research have been busy this week - it also unveiled a new Kinect port that allows you to turn anything into a touchscreen device.

Check out the video below. And let us know if you are as chuffed as we are that we didn't mention Star Trek once in this post?