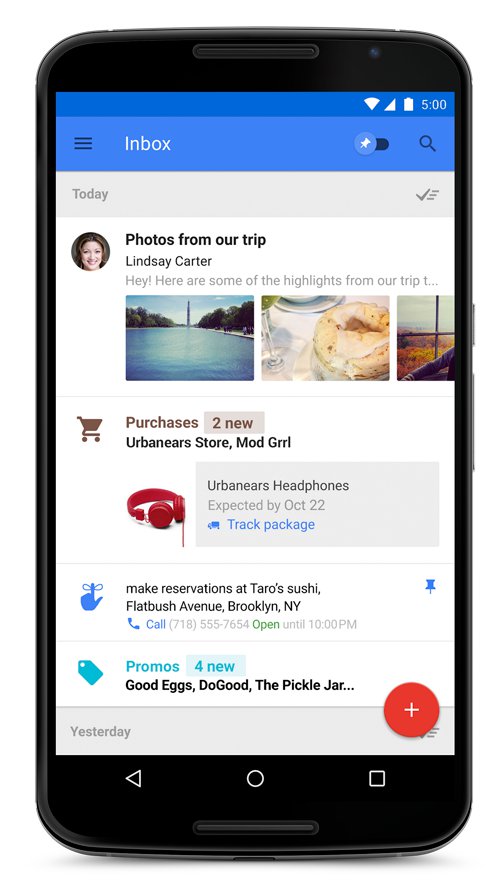 Google unveils its new app from the Gmail team called Inbox. The inbox is just a combination of both Google Now and your Gmail Inbox.

It combines like pieces of email, highlights related information, and keeps track of your life. Is that an end of Gmail? We surely had this doubt in our heads now.

Google’s Sundar Pichai called out the frustration of an overflowing email inbox. Inbox is Google’s attempt to make the inbox more approachable and organized without much user effort. ” For many of us, dealing with email has become a daily chore that distracts from what we really need to do-rather than helping us get those things done,” Pichai wrote. “If this all sounds familiar, then Inbox is for you. Or more accurately, Inbox works for you.”

They introduced a gif form, as you can see in the video; the app both shows prioritized events and emails you’ve received. Think of it as the lovechild of Cards and Gmail. Whether it’ll replace our standard Gmail app is another question altogether; trading the flexibility of Gmail for a more streamlined inbox is appealing, but also Gmail has an iron grip on our lives. In case that wasn’t clear the first time.

Inbox also integrates Google Now reminders and lets you create your own reminders. You can snooze messages and set them to show up later, at a specific time or when you’re in a specific location. Inbox features are new twists on options that will sound familiar to Gmail users. The Bundles option automatically will group similar messages, such as receipts, and allow you to swipe them all away at once. You can also create custom message bundles.

The app’s still in the invite stage, and Google says the first round of invites are already out in the world. It’s only running on a Nexus 6 in the image, only on Google Chrome on the web, but Google says it runs on Android phones with Jellybean or better (4.1+) and iPhones running iOS 7 or better.