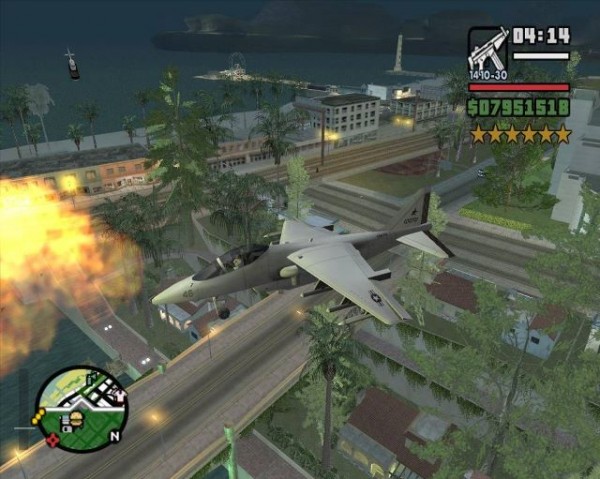 Always crashing the Hydra jet on San Andreas? This will help you improve your flying skills. Follow the simple steps below

Find a Hydra. They appear (depending on how far you have progressed into the game) at the Aircraft Carrier in San Fierro, in the 'Restricted Area' in Las Venturas, or at the abandoned airstrip north of the Restricted Area after completing the mission 'Vertical Bird'.

Found one? Enter it pressing ?:Y.

Keep your finger on X:A. Use the left analog stick to control the Hydra. Ascend to a point where there are no obstacles.

Press R3 to bring the wheels up and slowly push the R stick forward. This will send the Hydra in a forward direction.

To land, you must do everything in reverse. Pull the R stick towards yourself to rotate the engines downward, for "hover mode," use Square to slow the Hydra down, and press R3 to lower the landing gear.

Find a Hydra. They appear (depending on how far you have progressed into the game) at the Aircraft Carrier in San Fierro, in the 'Restricted Area' in Las Venturas, the abandoned airstrip north of the Restricted Area after completing the mission 'Vertical Bird', or you can type "jumpjet" to spawn one.

Enter it by pressing your 'enter' key.

Press 8 on your keypad (to the right) to rotate the thrusters into regular flying mode.

Press 2 on your keypad (to the right) to rotate the thrusters into hover-mode.

Press and hold W to fly, S to slow down, Q/E for yaw, A/D for roll and your up or down arrows for pitch.

To retract or extend your landing gear, press the + key on the keypad (to the right.) or 2 key (to the top left)