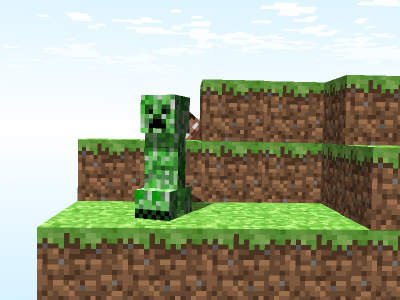 Having trouble in killing mobs? You can use various combat techniques used by experienced players everywhere to wipe them face. Follow the simple steps below

Grab a sword of any kind (preferably stone or better). Get some armour, too. If you have one, take a bow, and maybe a couple of tamed wolves. Also get some torches. If possible, get your equipment enchanted.

Wait until its dark. Set the difficulty to Easy or above if you haven't done so yet. Put your weapons, food, and potions on your hotbar and place some torches around you.

When mobs begin to spawn, ready your weapons and prepare for battle!

The zombie is the easiest hostile mob. It will walk towards you slowly and burn up in the day.

Walk close to the zombie and let it come to you. Once it is within two blocks, critical hit it (jump and strike). You do not have to retreat after hitting it as it is very slow.

Repeat this process until the zombie is dead. Look around and make sure there are no more mobs around. Proceed to collect the experience and any drops, like rotten flesh.

If fighting several zombies at once, do run towards them and spam. This knocks them back several blocks. Also, when focused on you, a zombie will not attack a tamed wolf that is attacking it.

The spider is more dangerous than the zombie by alot. They can scale walls and will jump while attacking. They become passive in the day.

Let the spider come to you. Be warned, as the spider jumps and scales walls. Instead of the regular approach, start with a running hit to knock it back.

Proceed to charge forward and spam in the general direction of the spider. You will take some damage from this. However, you also have the choice of another running hit followed by a critical.

Look around to make sure there are no other mobs around. Collect the experience and whatever item(s) it may drop, like string or spider eyes.

Skeletons have bows that they shoot you with. It is fairly easy to dodge arrows when further away, but more difficult when closer up. As with zombies, they will burn when in contact with direct sunlight.

If possible, snipe the skeleton with your bow. Otherwise, run towards it in a zigzag formation and do a critical hit.

Catch up to it and spam. Try to block (right mouse) the arrows when you're close, as the chances of dodging now are minuscule. Try and determine what time the skeleton will fire based on how fast it was firing before.

Collect the experience and whatever item(s) it may drop, like bones and arrows.

The creeper is one of the most dangerous mobs at night. Their navigation AI is very good, and they will explode when you get too close. They are unaffected by daylight.

Snipe it to death. If you do not have a bow, try to get it in an open area. Do a running hit on it and back up.

Repeat. If the creeper starts flashing, get away from it until it either stops or explodes. If you kill it, collect the experience and the item(s) it may drop, like gunpowder.

Note that there is also a charged creeper. When a creeper is hit by lightning, it has a bluish aura surrounding it. When it explodes, it causes ten times the damage of normal Creepers. You get rid of a charged creeper in the same way as a normal creeper.

The spider jockey is very dangerous. It is created when a spider spawns with a skeleton on the back. Spider jockeys should be avoided, as they have no special drops.

Go for the skeleton first. Run in a zigzag motion. Spam click in the general direction and try to use running hits, and block right after. Once the skeleton is dead, go for the spider.

Endermen are tall and black. They can teleport and hit very hard. However, they are damaged by water and will usually die in the rain.

Spot the enderman. Do not make eye contact with it (hovering the cross over its upper body). There are three ways to kill the enderman.

Run towards it. Jump and crit it, and keep critting it. If it teleports, look for the trail of particles and it will lead you to the enderman, who is most likely attacking you. Repeat and kill.

If you don't have good armour, get some tamed wolves (at least five). Do the first hit as a crit and let the wolves finish it. Feed your wolves after, as they will probably be injured from the enderman's attack.

Step in water and make eye contact. The enderman will try to teleport to you, but will be damaged by the water and teleport away. Repeat until dead.

Collect the experience and the drops, like an enderpearl.

The slime lives deep underground. They will spawn only in large areas. Encountering a slime is very rare for new players.

Approach the slime and perform several criticals. Be careful when killing the large ones, as they will split. Once the slime is dead, backup a bit. Note that each one splits into smaller slimes.

The silverfish is a small mob that can be found in strongholds. They hide in blocks. If you break the block they hide in, it will pop out and attack. So will every other silverfish around it.

Use your fists to hit the block. If it seems to break too quickly, stop, because there is a silverfish in the block. If this doesn't happen, you are safe.

Place some TNT next to the block and blow it up. This guarantees that the silverfish will not attack you. Proceed normally.

In the event that you are confronted by a swarm, you have two options. Of course, you can try taking them with your sword, but as they are small and fast, this is not recommended to inexperienced players.

Go on through the stronghold. Collect the experience, if there is any.

The zombie pigman is a mob found in the Nether. They act like zombies, but travel in groups and are neutral. If you attack one, every zombie pigman around you will become aggressive. Zombie pigmen also can appear in the normal world, when lightning strikes a pig. However, this almost never happens.

Look around and note the position of the pigmen around you. Attack one with a critical hit. If you are good, try fighting in third person view.

Get to one side of the horde. Try not to run around, as this will attract more pigmen. Watch your step, as one misstep can send you plummeting into lava. Do not let them surround you.

Run and hit any pigmen who are too close. A knockback sword is usually better for this, as if you run too far, you will be surrounded. Lead the horde around in circles, hitting them. Do not wander too far, as you will likely attract other swarms.

Kill the entire horde one by one. Collect the experience and whatever drops they may leave, like cooked porkchop or gold nuggets.

Blazes are another nether mob. They are commonly found in Nether fortresses beside their spawners. Blazes are very difficult to fight. They can fly and shoot unblockable fireballs in sets of three. Blazes are usually killed for blaze rods, used to make eyes of ender.

Enchant your bow. If you want a quick fight, this step is almost mandatory. A bow is one of the easier ways to kill a blaze, seeing that they can fly. Also obtain some snowballs and some pumpkins. It is a good choice to store the snowballs as snow blocks, and will save time.

Set the difficulty to peaceful once you reach the spawner. Make snow golems around it (two snow blocks and a pumpkin). Also build a small 3 block high wall out of cobble. It doesn't have to be too long, and should have a small roof.

Get behind the wall and set the difficulty to Hard. Start charging your bow. Do not try to shoot the blaze until your bow is fully charged.

Quickly move from the wall with your fully charged bow and fire at the blaze. Be sure that you are close to the end of the wall so you can hide faster. If a blaze is waiting for you on the "safe" side, kill it with snowballs.

Shoot at the blaze. Get behind the wall and start charging your bow again. Repeat until the blazes are dead.

Collect the experience and drops. You may have to build your way to the drop, as blazes fly. Set the difficulty to peaceful. Rebuild any fallen snow golems and continue.

Ghasts are mobs that fly around in the Nether. They appear to be large floating squids, and will shoot exploding fireballs at the player. They used to do very limited damage, but now can kill in a few hits. They have a massive attack range and can shoot at you from very far away.

Aim for the tentacles. For some reason, arrows shot at the face will simply pass through the body. It has very low health, but may be hard to kill as it can attack from a hundred blocks away, making it very hard to hit.

Either dodge the fire or spamclick with your sword to deflect it. Fireballs are easy to deflect, and can kill a ghast if you hit the ghast with it. Don't count on it though, and still use your bow as your primary weapon.

Seeing that ghasts can fly, you will need to build bridges to get to the drop (gunpowder and ghast tears) and experience. Collect them. Also, it is a good choice to build it out of cobblestone, as ghasts are capable of destroying netherrack.