Build A Railway System On Minecraft 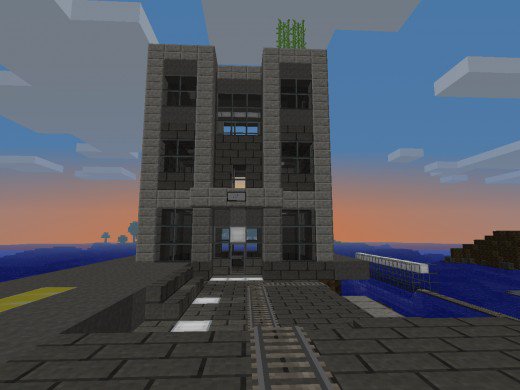 You can build a city with trains that can help your transportation build. Follow the simple steps below

Make an inventory with items you only need. Get it off TooManyItems. See this list:

Create a (real life) map. Draw out your plan of your railway map, bridges, tunnels, signs etc. The map of your Minecraft city must also be needed to help building.

According to your real life map, start building. This is a high-class railway system, so you must build a station for the railway. A tunnel is always the best so it won't block your buildings that you might build on the ground.

When building the station, don't dig directly down. Dig in a direction, so you could build stairs instead of ladders. Dig in 2-3 blocks wide.

Don't make it too deep. Make sure you make it convenient enough for yourself. Dig until you reach 8-15 blocks deep.

When you finished digging till your point where it isn't too deep, create an area cleared up. If there is a cave, change your direction.

Build your space for your train tracks. It could be 1-2 blocks wide. You could put it to the side or end of your station.

Don't start putting the tracks down yet! This is a high-class type, so you must make your station clearer and nicer. Start putting more exits of your station, so it would be easier for you to get to it. At each of those station exits/entrances, add a sign that says whatever the name of your station is. Since the wideness is 2 blocks, put 2 signs. The signs should be on top.

Add information based on your real-life map. That should be showing where the exits lead you to, where the trains head to, etc.

Put staircases on your stairs that lead up to the exits.

You could change the colour of your station, not just some boring cobblestone colour. Put gold, diamond whatever you like.

Put a chest that contains Minecarts so you could get them easily. It is true that you could get it off your TooManyItems cheat, but this just makes it more real.

After you decorated your first station, start building your railway. Put minecart tracks along the way, but two or three powered rails at the start of the tracks without redstone torches, this helps stop the cart to stop moving. You must do that for all stations to help it stop. Between 7-14 Minecraft tracks, add one or two powered rails along with redstone torches on the wall. This speeds up the cart so it won't stop.

Use your player Minecraft map to help yourself guide you where your next station is going to be. According to building your first station, you must decorate this station too.

Repeat these steps until you finished your first line. Then, name your line.

For interchanging stations with different railway lines, you have to put a note for information about it too.

If any of your lines go through the sea, make sure you dig deep enough for your railway tracks to not get flooded.

This is a low class railway system. You won't have to build anything underground.

Start planning what stations you want on your city.

After planning, start building. Create a name for your stations, and then build your rails on the ground. Make sure you have powered rails, rails, redstone, torches, and Minecarts.

Also, put powered rails along the way for boosts. You will need a redstone torch too for each rail.

If any of your stations go across the sea, create a simple bridge with dirt.

Make sure you put a powered rail with no redstone torch at every station for it to stop.