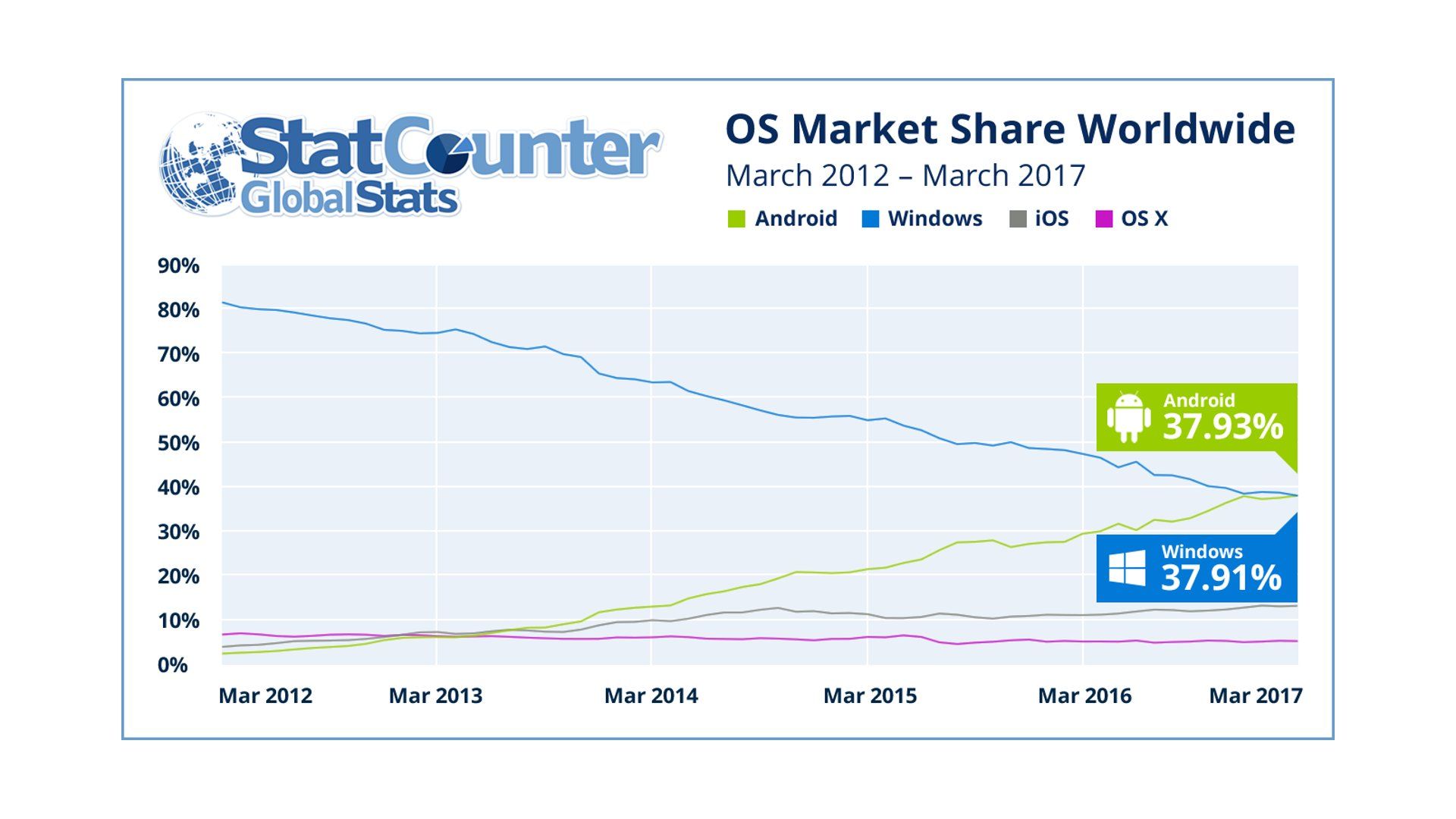 According to a StatCounter report, Google has reached yet another impressive milestone as of last month. Android has overtaken Windows as the Internet's most popular operating system in terms of total internet usage across desktop, laptop, tablet and mobile combined.

As per the report, Android accounted for a larger chunk of overall internet usage than Windows for the first time ever with worldwide OS internet usage market share of 37.93%, with Windows just behind at 37.91%. This is a major historical milestone for Google and Android as no operating system has been able to knock Windows off its perch since the 1980s.

To reach this conclusion, StatCounter aggregated data collected from a sample "exceeding 15 billion page views per month [and] more than three million websites".

StatCounter CEO Aodhan Cullen said that main drivers of the breakthrough were growth of smartphones to access the internet, a decline in sales of traditional PCs and the impact of Asia on the global market. To give you some more insight, Asia currently leads the charts as far as overall Android usage goes:

The good news for Microsoft is that Windows still owns the majority market share among desktop operating systems (PCs and laptops). It is also the dominant operating system in terms of Internet usage across all platforms in North America (Windows at 39.5%, iOS at 25.7%, Android at 21.2%). However, Android's growth in Asia is significant enough to overthrow Windows on the global stage. In addition, if we take mobile internet usage out of the equation, Windows is still king with a staggering 84 percent usage share for the month of March 2017.

"Windows won the desktop war but the battlefield moved on", said Cullen. "It will be difficult for Microsoft to make inroads in mobile but the next paradigm shift might give it the opportunity to regain dominance. That could be in Augmented Reality, AI, Voice or Continuum (a product that aims to replace a desktop and smartphone with a single Microsoft powered phone)".

While Microsoft Windows will continue to dominate the desktop market, Android has become the dominant mobile operating system. It is also interesting to see that more people are using smartphones and tablets to get online than computers. This may not mark the end of desktops, as they are still way more powerful than smartphones and has many more uses. This report only proves that people find it comfortable to browse the internet using mobile devices than PCs.