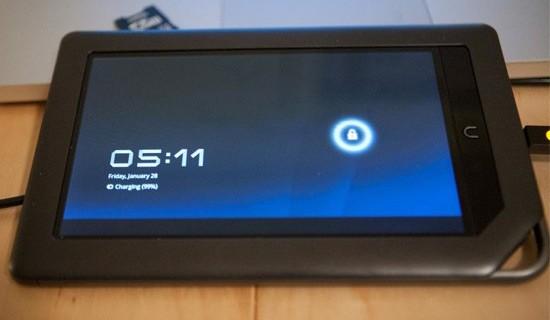 The Android-based Nook Color has an enthusiastic modder community that extends the funnctionality of the $250 touchscreen e-book reader by installing custom firmware and third-party applications. These custom enhancements can transform the eBook reader into a tablet computing device.

But now the Nook modding community has ported the Android 3.0 aka Honeycomb. Deeper-blue who is spending the past few days porting the Honeycomb's SDK over to the Nook color, has now finally decided to release his latest work to eager the users and fellow coders. He's enabled the accelerometer, touchscreen, buttons, graphics acceleration, and wireless connectivity, but the other things like sound remain on the list now.

The unofficial port of Honeycomb to the Nook is still at a relatively early stage of development, but it already has working support for hardware-accelerated rendering on the Nook hardware. This is a highly significant revelation because it demonstrates the potential suitability of Honeycomb for lower-end devices.

Previously, it was regarded that NVIDIA's dial-core Tegra 2 chipset as the reference hardware for Honeycomb and that this Android version will need a dual-core hardware with high-end 3d graphics capabilities.Google has repeatedly debunked the claim that Honeycomb will require a dual-core processor in order to function. The new Nook port shows unambiguously that Android 3.0 doesn't require bank-breaking specs.

It's likely that Android 3.0 on the Nook will get a big boost when Google does the official code drop. We expect that to take place within the next couple of months, at some point after Motorola launches its Honeycomb-based Xoom tablet.