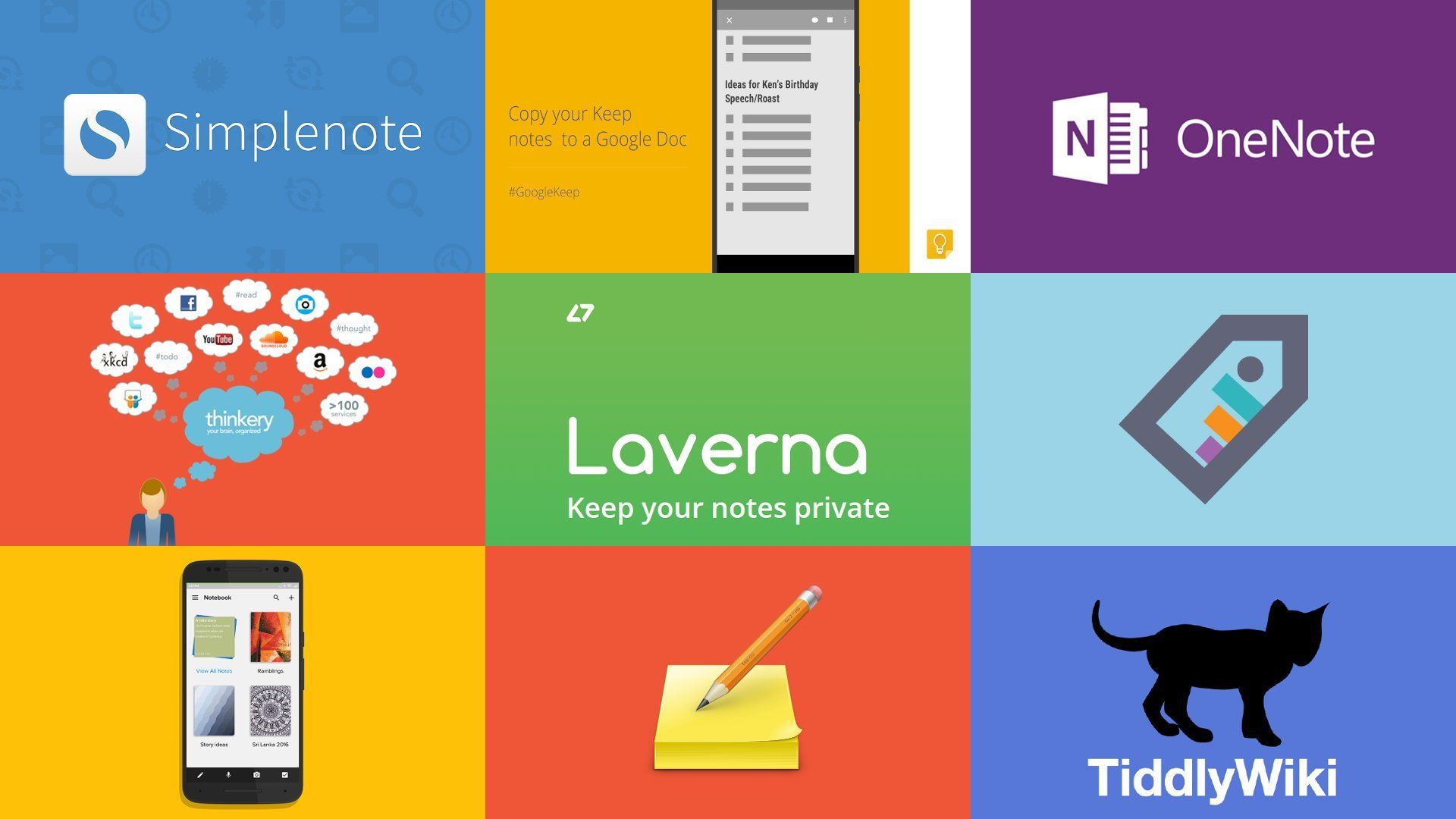 If you are one of those who forgets things easily, you need not be taught about how productive note taking can be in day-to-day life, especially if you are a busy professional, with hell lot of tasks assigned to you or a student that has a variety of assignments to submit. Then, however, you need no sort of introduction to Evernote, which is indeed the most popular tool for note taking and archiving.

Evernote and its 200 million users rival the number of Pinterest and Snapchat users, and one can bet that Evernote users spend more hours on the tool than the other two. It often seems like Evernote is the pacemaker for everyday productivity for its millions of users. I have enjoyed Evernote in the past, although I have not used it in a while due to its pricing.

Evernote offers a huge number of productive features that will help you manage your tasks, assignments and other things by means of creating efficient notes, which can be synced with different devices and platforms, thereby transcending boundaries of location. Evernote never limits notes to text but lets you enrich your notes through rich media such as photographs, web articles, handwritten notes and more.

These having said, Evernote is not the one and only productive note taking service you can depend upon! And, there might be a bunch of instances when you need to seek alternatives to Evernote, such as:

Here, in this post, we have come up with a list of top 10 Evernote alternatives, while also discussing how these solutions are different & significant in your busy life. Let's kick start the list! 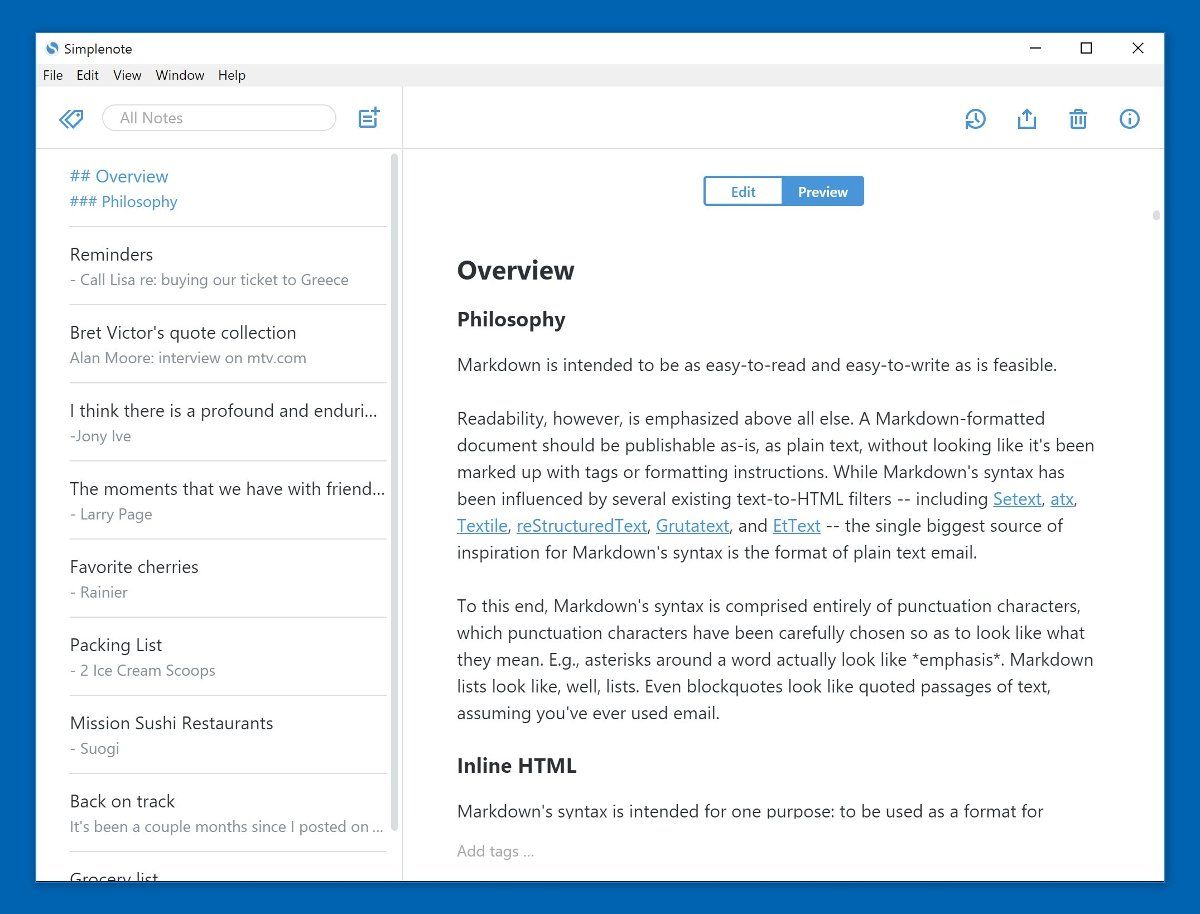 Simplenote lives up to its name. The developers have not wasted any energy implementing useless bloat that you will never use. Instead, we have a streamlined note-taking app that is fast, organized, and pleasing to the eye.

There are not any notebooks. Notes are organized using custom tags, although you can pin individual notes so they stay at the top of the notes list. The notes themselves are plain text (no rich-text editing), but if you need formatting, you can switch into Markdown mode on a per-note basis.

Another noteworthy feature is per-note revision histories. As notes are edited, Simplenote saves periodic snapshots -- and you can look through them and revert the note to a previous snapshot when necessary.

The clean and minimal interface is designed for fast note-taking. Simplenote supports notes of any length, but like Google Keep it is for quick note-taking rather than long-form recording. Simplenote is definitely recommended for list-makers who like a clutter free environment that is a bit more powerful than a simple notepad. 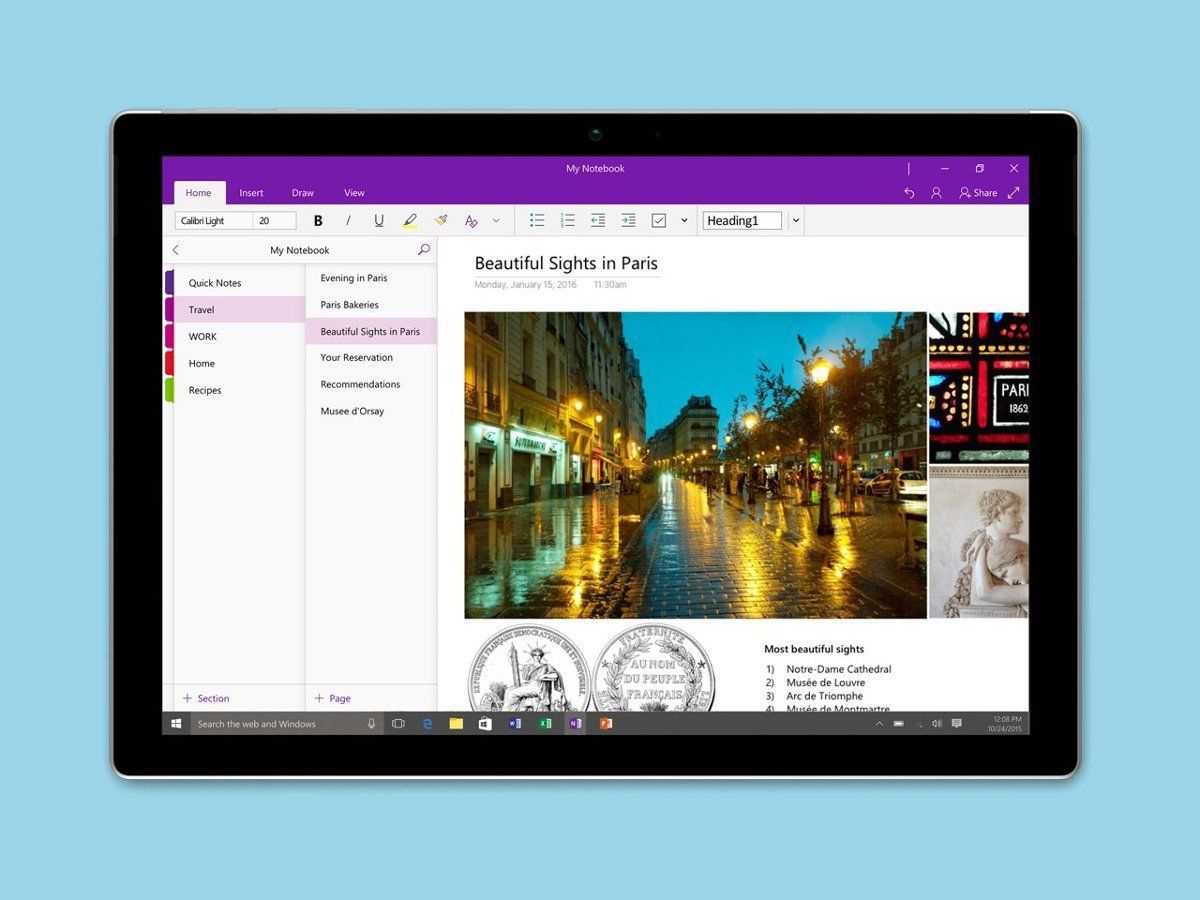 Microsoft Office bundled note-taking software. OneNote is cross platform and cross device: it allows for syncing across as many devices as the user would like.

OneNote is superb as far as you are concerned about your notes available on all your devices. You can also add web clipping as notes, convert your emails into notebooks, add photographs etc. In addition, you can create checklist-based notes. Next, we will have to consider collaboration features of Microsoft OneNote. Microsoft OneNote also supports third-party applications like Chegg, Zapier etc.

If you use Microsoft services in day-to-day life, preferring Microsoft OneNote over Evernote makes enough sense, especially while considering a rather clean interface of the note-taking solution and the superb level of integration it has with Microsoft Office 365.

Competing as an Evernote alternative, it is available for free as a web app, as well as natively on iOS, Android, OS X, and Windows. You can also use OneNote for free on as many devices as you want. 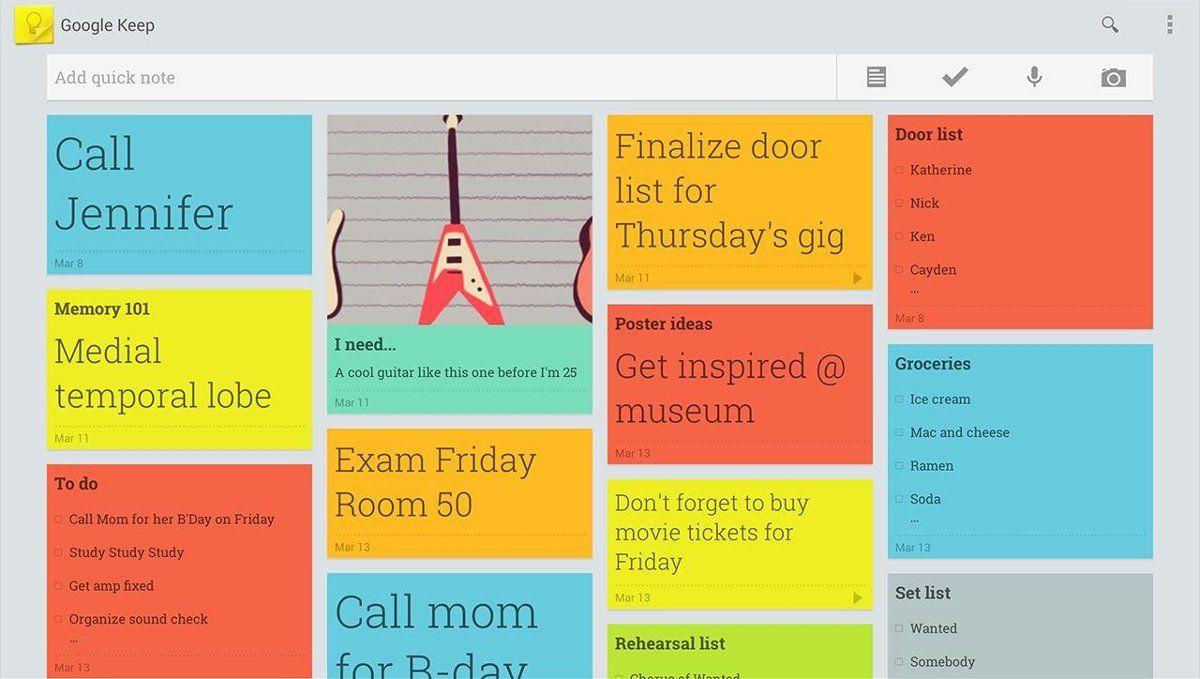 If you prefer the "sticky notes" approach over the "pages of text" approach, then why not use Google Keep? I do not use it much because I like dedicated desktop apps, but I have to admit that Google Keep is fantastic for mobile note-taking.

You can find a lot of creative uses for Google Keep. Google Keep started its life as a bare-bones sticky note-taking tool, but now it has morphed into something more powerful with text recognition and automatic note organization. It is still not a feature-for-feature competitor to Evernote.

For example, it lacks the rich text formatting options or the app ecosystem of Evernote. But it is the tool of choice for anyone who likes a simplified but streamlined note-taking system. You can fit Google Keep into any workflow with the right tips.

Google Keep has kept minimal approach in terms of design and almost everyone can get familiar with Google Keep's grid-based arrangement in seconds. Notable features include color codes for notes, list-based notes, an ability to share your note with others, reminders within notes -- these reminders can be read by Google Now, OCR to grab text from images, automatically-transcribed voice notes etc. Plus, if you have an Android Wear, it will show you notes from Google Keep.

There may be several reasons to prefer Google Keep to Evernote and some of them are its integration with Google's other services and a completely simple interface when compared. 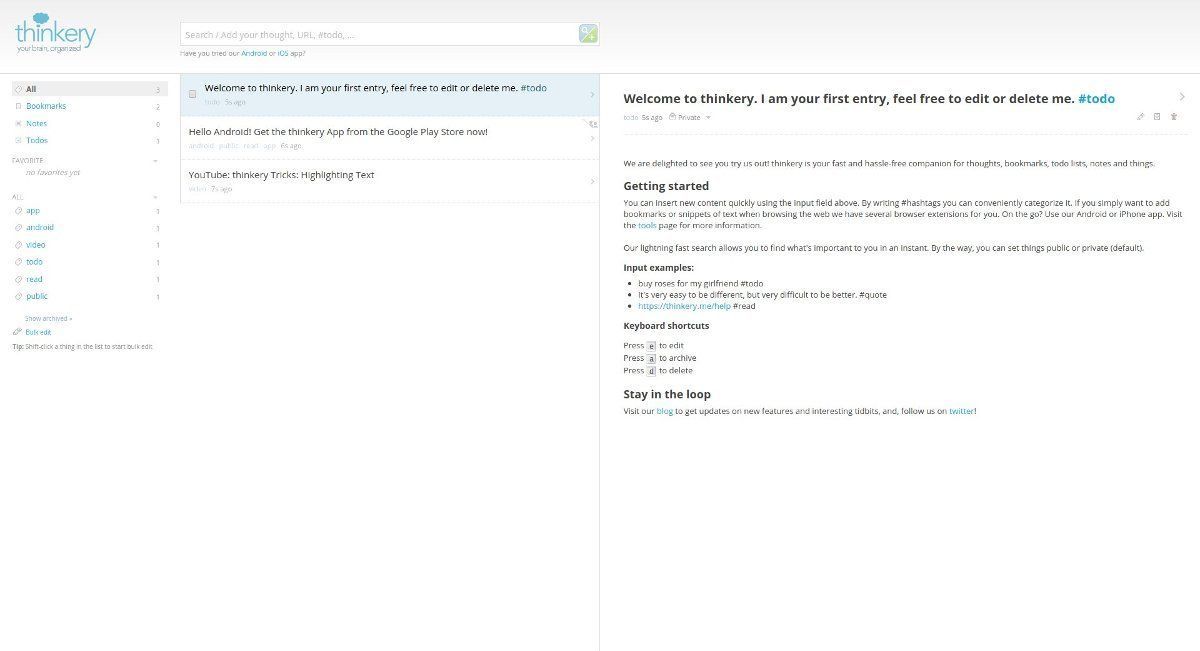 Thinkery is a web-only note-taking app that deserves every bit of praise it gets. It is truly lightweight. It supports three entry types: Notes, To-dos, and Bookmarks. Notes are just regular rich-text notes. To-dos are notes that can be marked as completed. Bookmarks are snippets from the web. Beyond that, notes are mainly organized using custom tags.

The web version works well enough, but the Android and iOS apps have not been updated in a few years so you may run into occasional bugs. 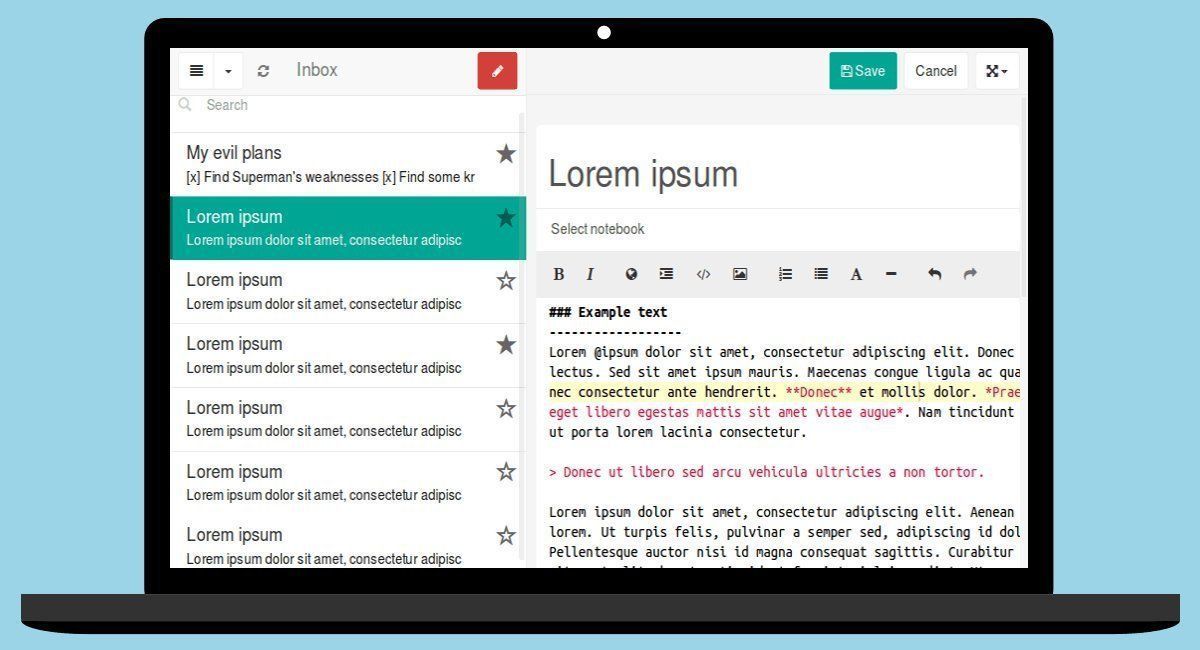 The biggest selling point of Laverna is its focus on privacy. Your notes are never stored on Laverna's servers, but you have the option of integrating with Dropbox or RemoteStorage if you want to sync across devices. You can also set an encryption password to keep your notes 100 percent private. Being more secure over most Evernote alternatives is also a great reason to choose this over others.

Laverna has two other big points in its favor. First, all notes are written in Markdown with a live preview window. Second, it has three levels of organization: profiles, notebooks, and tags (and notebooks can be nested within other notebooks).

In addition, it has distraction-free editing mode, syntax highlighting if you ever write code in your notes, several handy keyboard shortcuts, and it is open source on GitHub. 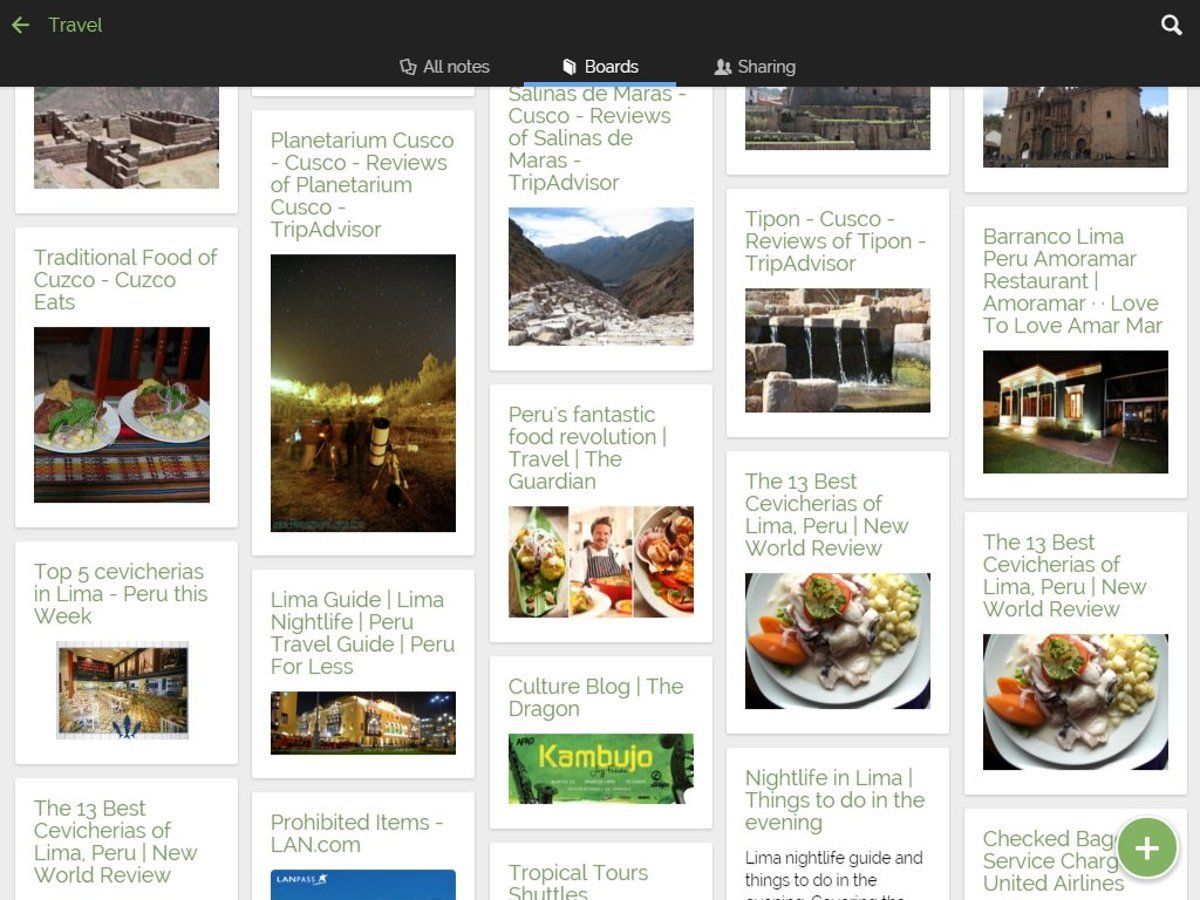 Turtl is another security-minded note-taking app -- so much so that it does not have a "lost password" feature. If you forget your login details, all of your notes are doomed and irretrievable. Keep this in mind before committing to this app.

What makes Turtl unique is that, in addition to notes, you can also collect files, images, and web bookmarks. All of these items are arranged into boards (which are basically notebooks with a more visual layout) and can be tagged for a more granular organization.

Turtl is definitely unconventional, so it may take a while for you to grow into its design and structure -- or you may never come to like it. I do recommend that you give it a try, though. Who knows? Maybe you will love it. 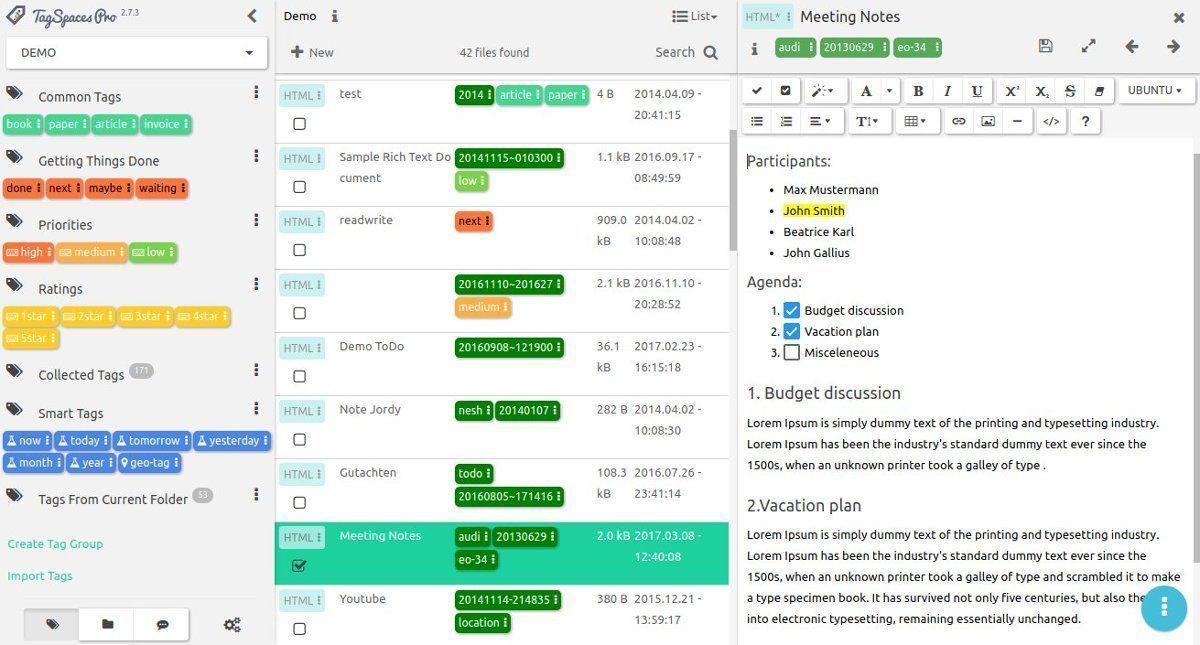 Unlike all of the other apps on this list, TagSpaces is completely offline. It never sends data across the internet. Instead, it only uses local folders and files, which also means no cross-device syncing (unless you sync using a cloud service like Dropbox or Google Drive).

TagSpaces supports three note types: plain text (TXT), Rich Text (HTML), and Markdown (MD). The interface is a bit overwhelming at first, but once you get used to it, it will all make sense and boost your productivity. And since TagSpaces uses the local file system, staying organized is as easy as creating your own preferred subfolder hierarchy.

While the free version is fully functional, you can unlock extra features (like advanced search, geotagging, and file/folder tagging) with the one-time $40 Pro version.

Zoho Notebook takes the same catch-all approach as Evernote and OneNote but has a few design ideas of its own. It is a card-based alternative to Evernote and is similar to Google Keep. You start by creating notebooks that resemble physical notebooks. Inside those notebooks are cards. Those cards can be lists, drawings, maps, images, audio, or web clippings. You can stack cards on top of each other to form groups or leave them as individual pages.

The Zoho Notebook is drop-dead gorgeous, with a simple interface and a visual organization system that lets you choose covers for your various notebooks and group related notes into stacks. While the company is typically known for its corporate tools, the Notebook apps are far from what you think of when you think of corporate apps. The mobile apps were introduced midway through last year, but since then they have matured into something much more usable. 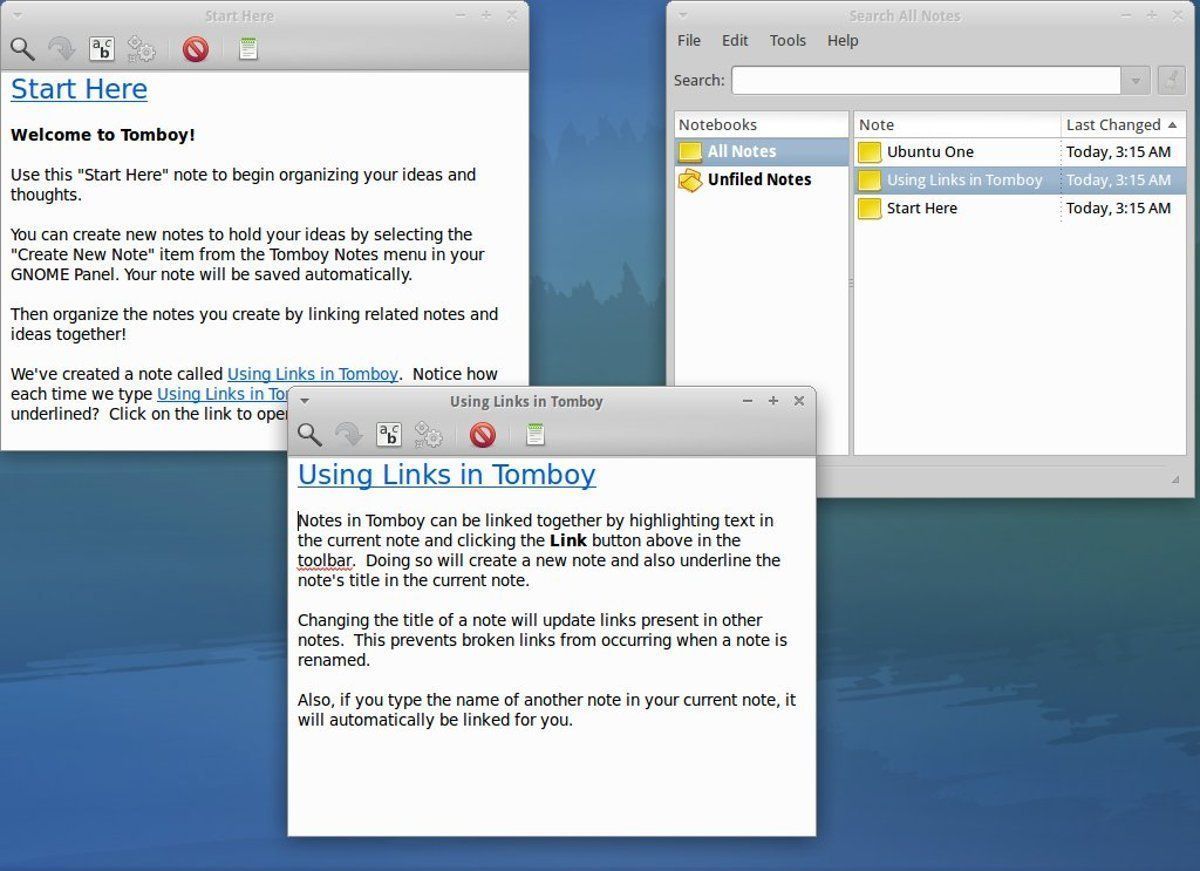 Tomboy is a desktop note-taking application for Linux, Unix, Windows, and Mac OS X. Android users have the Tomdroid app and can use Rainy to sync between them. Simple and easy to use, but with a potential to help you organize the ideas and information you deal with every day.

Tomboy is part of the GNOME desktop environment personal information management software and achieved widespread popularity as the default note taking app in early Ubuntu Linux releases. While initially designed for Linux, it is now available for Windows and Mac. Being a FOSS software, all the components of Tomboy are free, open source, and it allows for self-hosting the sync server. This freedom may appeal as an Evernote alternative, as Evernote is pretty locked down.

Its interface is a notepad with a wiki-like linking system to connect notes together. Words in the note body that match existing note titles become hyperlinks automatically, making it simple to construct a personal wiki. For example, repeated references to favorite artists would automatically be highlighted in notes containing their names. As of release 1.6, it supports text entries and hyperlinks to the World Wide Web, but not graphic image linking or embedding.

It also offers Note synchronization over SSH, WebDAV, or the Tomboy REST API that is implemented by several server applications. If Tomboy does not have the features you want out of the box, you may be able to find them here as a plugin. Being able to add extensive add-ons makes it suitable as an Evernote alternative.

You should not discount personal wikis for note-taking. TiddlyWiki is the best known among them and comes with the benefit of a worldwide community who are putting the software to many creative uses. TiddlyWiki is simple and easy to customize, even if you are ignorant about HTML and CSS. It is Open Source and designed to run on any browser. You do not need to install anything or use a web host.

It is completely customizable and private and allows you to encrypt the contents of your notebook. You can also store your information wherever you want to -- locally, on a cloud folder, your mobile, or on a USB Drive. A custom desktop application called TiddlyDesktop is also available which works with Windows, Mac OS X or Linux.

Thanks to the mature community, you can extend TiddlyWiki with the variety of plugins, themes, widgets, and languages. To get started, save the "Empty TiddlyWiki" HTML file to your computer and start creating your notebook.

Well, we guess you have some other Evernote alternatives that you utilize in daily life! Obviously, we are quite eager to know your thoughts in the comments.