Xodiom Announces An Android Based Smartphone For $329 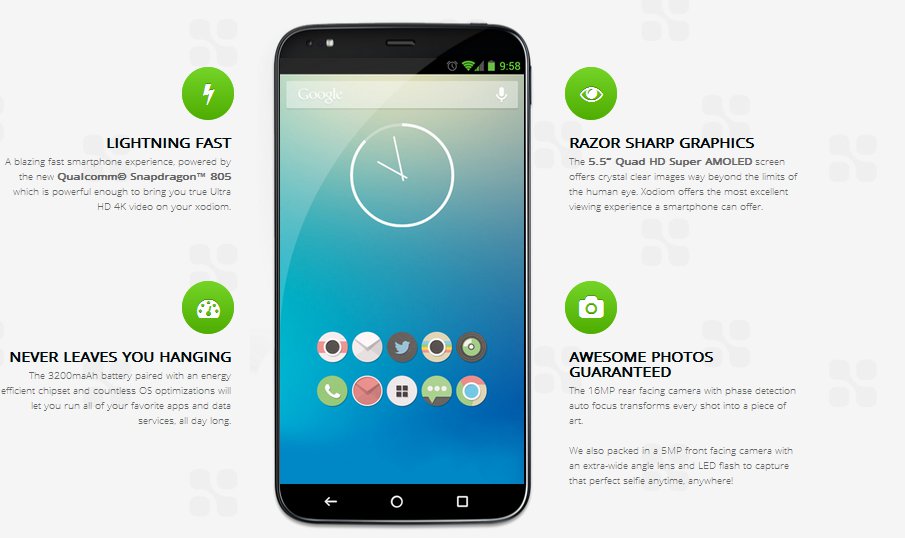 Xodiom Announces An Android Based Smartphone For $329

It's not every day that a company you've never heard of, called Xodiom, completely skips the media brouhaha and straight up launches a website where you can pre-order its sub-$399 Snapdragon 805-powered superphone that is on release schedule for January 5, 2015.

The only intel we have on Xodiom is that its web-page is made by German design company Hammar AG, so we figured it could be a German company. Could this be the second great German mobile uprising since Linshof introduced us to its octagonal-shaped Linshof i8, a smartphone in the making that's quite unlike any other?

The smartphone is capable of everything Snapdragon 805 devices do - things like 4K video with stereo recording, Dual Shot, simultaneous HD video and image recording, slow motion video, and more. In addition, the xodiom is resistant towards sweat, rain, liquids, sand, and dust. The screen is covered with Gorilla Glass 3 for scratch and shatter protection. Can you handle more awesome at this point? We know you do - the xodiom has dual stereo speakers and active noise cancellation with a dedicated mic, along with Accelerometer, Gyroscope, Proximity, Compass, Barometer, Gesture, UV, Heart Rate, and SpO2 sensors.

Take a moment to breathe, because we're about to reveal this beast's shocking price tag - it's $329 for the 32GB version or $379 for the 64GB version! Both are sold exclusively in Tuxedo Black, and once again, there's no invite scheme, shady contests, dull social network marketing, or other questionable initiatives involved.