Top 10 RTS Games Of All Times 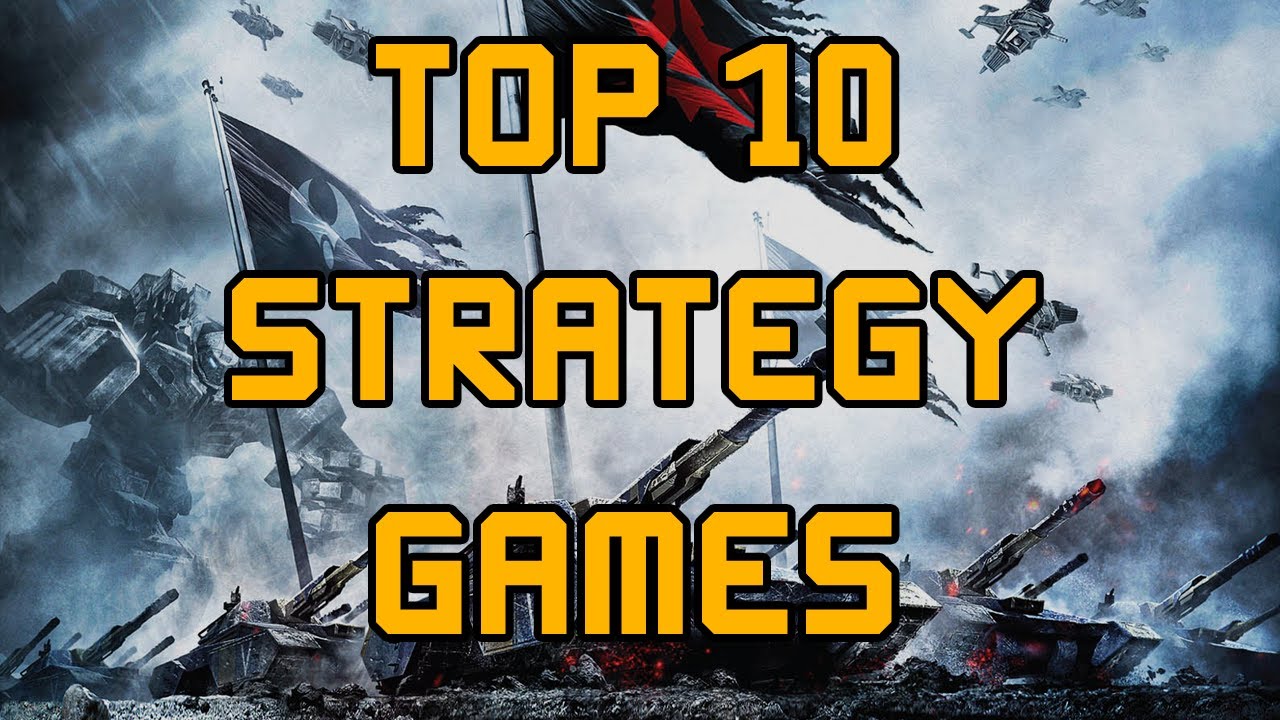 Top 10 RTS Games Of All Times

A good Real time strategy games (RTS) offer an excellent blend of action and strategy making them very hard to get it right. As these games involves a perfect balancing of economy, research and army in real time with decisions made on the spot, the fun these games provide depends on how well the developers balanced each factions in the game and how different each faction are to each other. Making even minor inconsistencies or deviations in how each units work can make or break an entire game.

There are lot of things like map design, campaign story, interesting resource/economy management, the way units and buildings are built, available researches, game lore and a plethora of other factors that have to come together to make an RTS more than good or memorable or even great.

Considering all this we have collected a list of games that are not only fun at their time, but also loved and played even today. This list is not perfect or any way rank the games (Dont confuse the numbers with rank), but merely a list of memorable great games that are even fun today.

Blizzard certainly knows how to make a game and Warcraft III is a great example of that. The Warcraft series takes place in the fantasy world of Azeroth, home for magical creatures, dragons, elves and orcs and humans. There are four playable races in Warcraft 3 namely Humans, Orcs, Night Elves and Undead. This game follows traditional RTS features of base building, resource gathering and technology/unit upgrades, while also introducing RPG elements in a strategy game with heroes and creeps. The game features an addictive gameplay, good graphics and an enjoyable story. The success of this game leads to the most successful MMORPG, World of Warcraft. 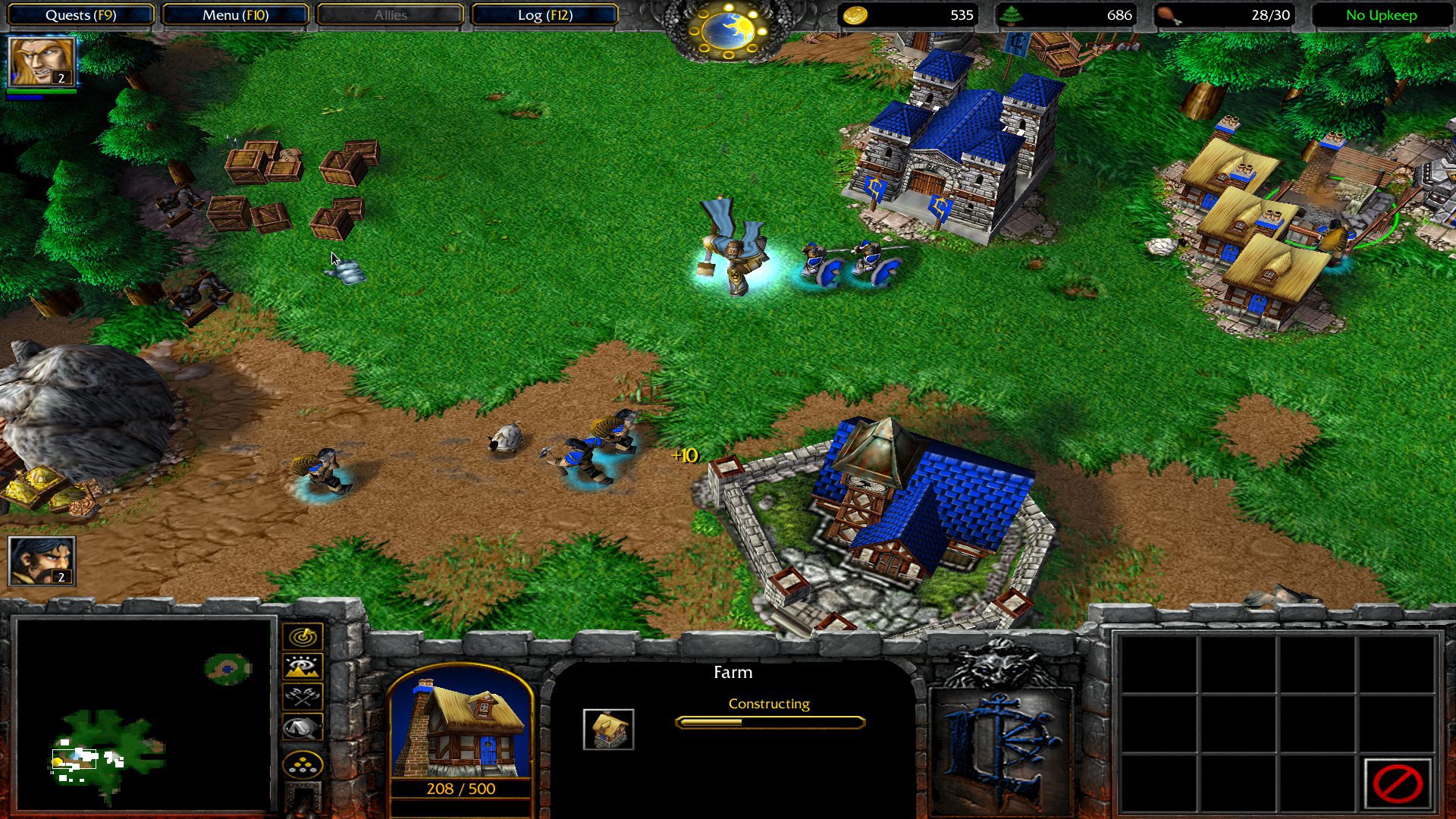 While Warcraft III is a blend of RTS with RPG elements, Age of Empires II is the perfect example of traditional RTS. Developed by Ensemble Studios and published by Microsoft, this game is set in the middle ages and consist of thirteen playable civilizations. The Age of Empires II focuses on building towns, gathering resources, creating armies and ultimately conquering your opponents by destroying their units and buildings. Players conquer rival towns and empires as they advance from Dark Age to Imperial Age. It also features 5 campaigns based on historical settings. 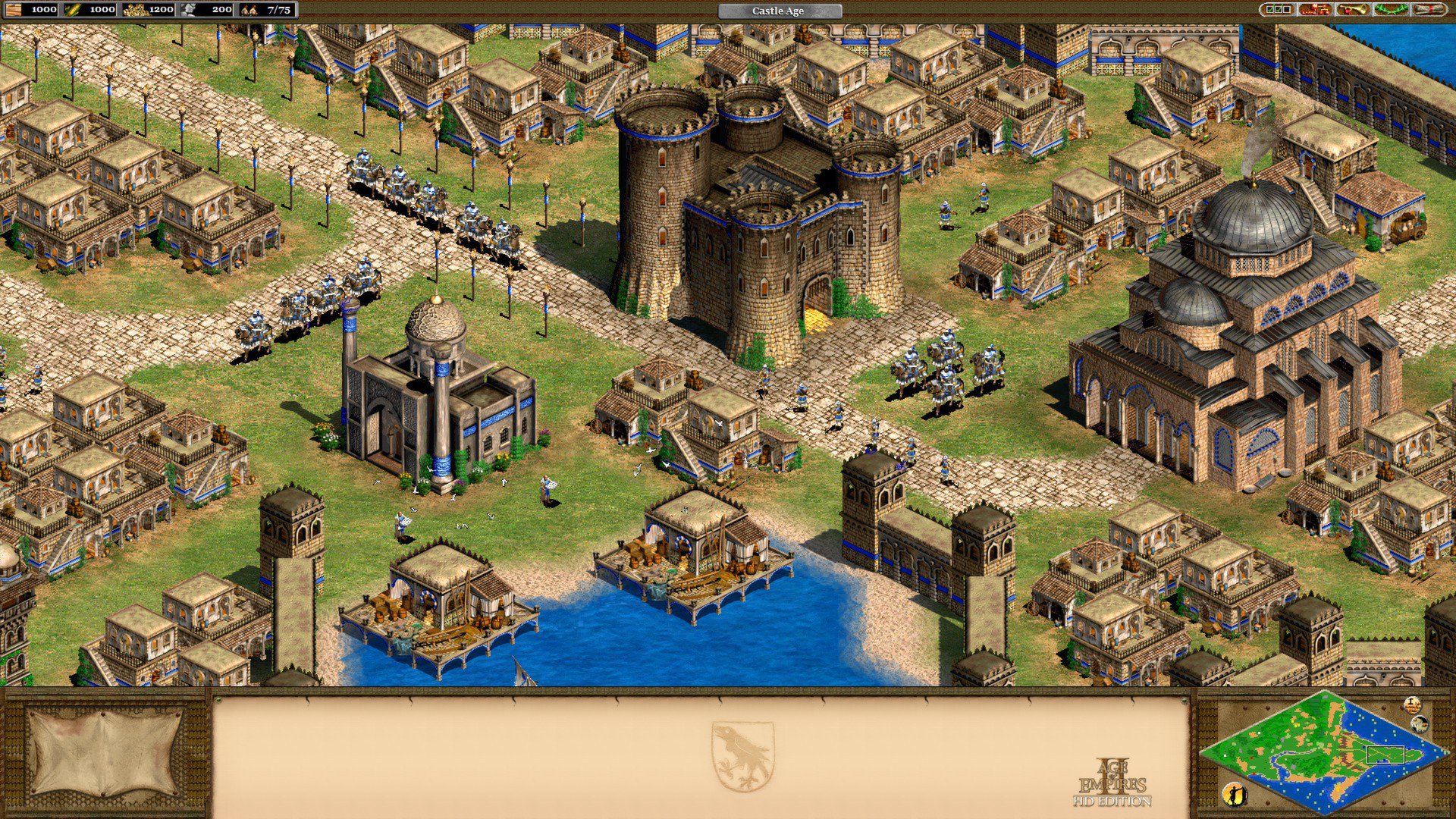 The Command and Conquer (C&C) series is known for its cheesy movies, simplistic gameplay and loads of fun, it is hard to keep all of them out the top 10 list. Command & Conquer - Red Alert 2 is a definite standout in the series due to its excellent musical score designed by composer Frank Klepacki, and the sheer entertainment the game provides. It also saw a more intense and long-lived competitive scene than any other Command and Conquer game save Generals. 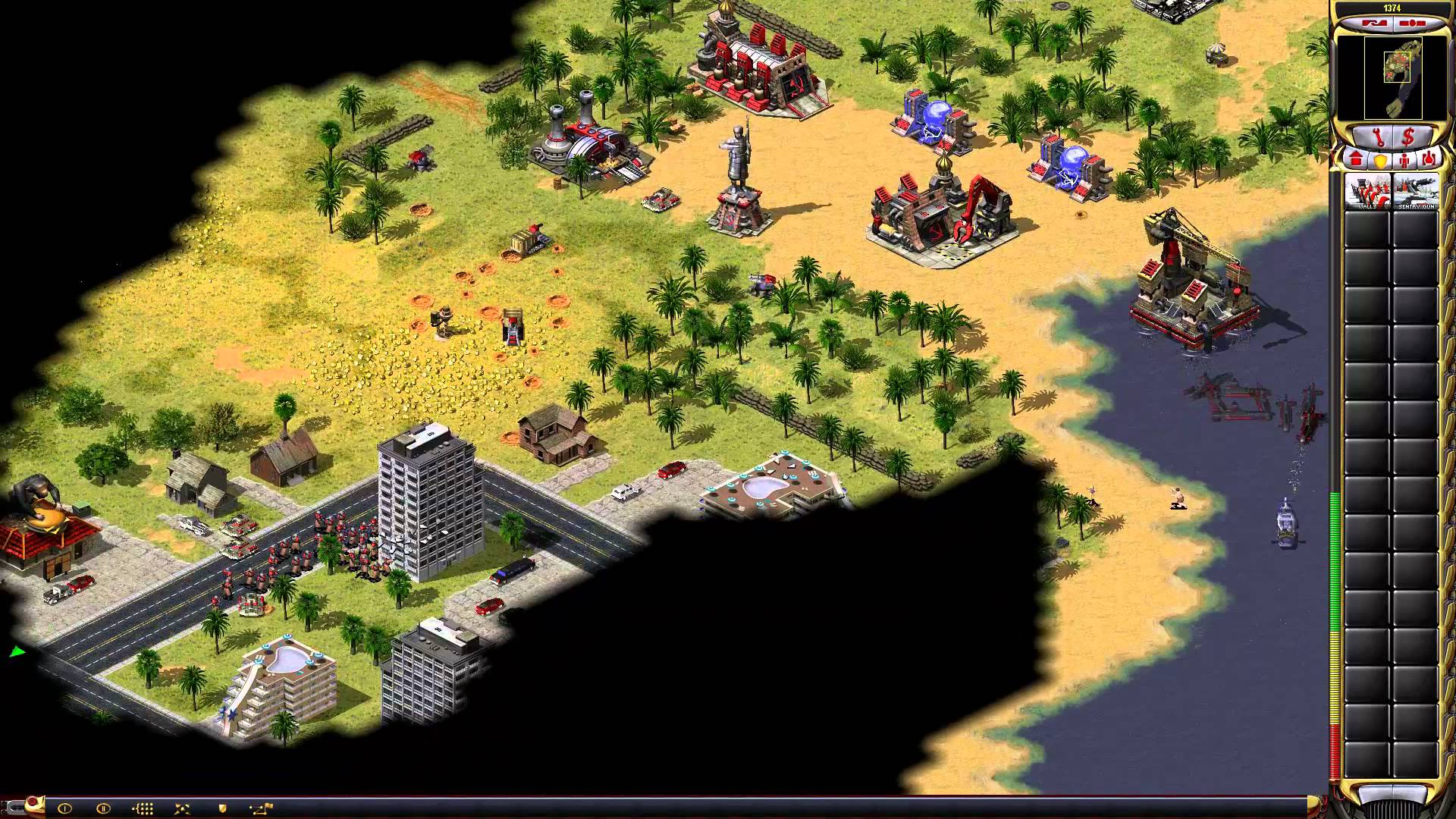 StarCraft 2 follows a proven game play mechanics with incremental improvements over its predecessor. But that is exactly what is needed to make it one of the most played and most recognizable RTS experience ever to be conceived. To a greater or lesser extent, this game has defined what it means to be popular in the real-time strategy genre. Clearly one of the top games of 2010 and the top real time strategy game released in the past few years. 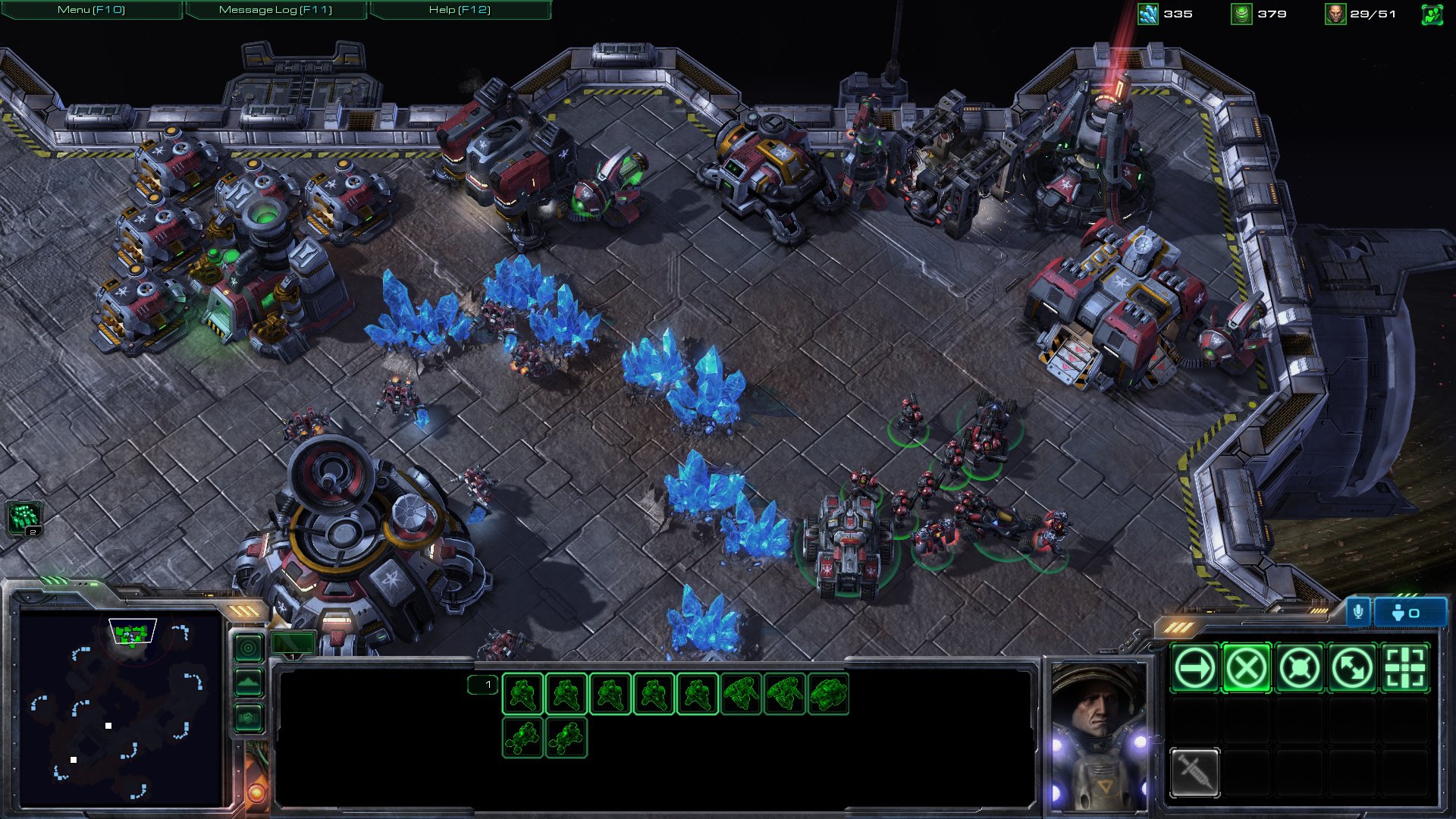 Company of Heroes is set during World War II and futures the intense strategic gameplay with its cover, field barracks and retreat mechanics, to its historically accurate weapons and vehicles, bringing gritty realism of modern war closer than ever before in a strategy game. There are few games with the strategic depth, historical accuracy and incredible polish of this title. . It captures the complexities of war and sets the standard for how a modern strategy game can integrate advanced features while keeping controls intuitive, and maintain huge depth despite a lack of traditional base building mechanics. 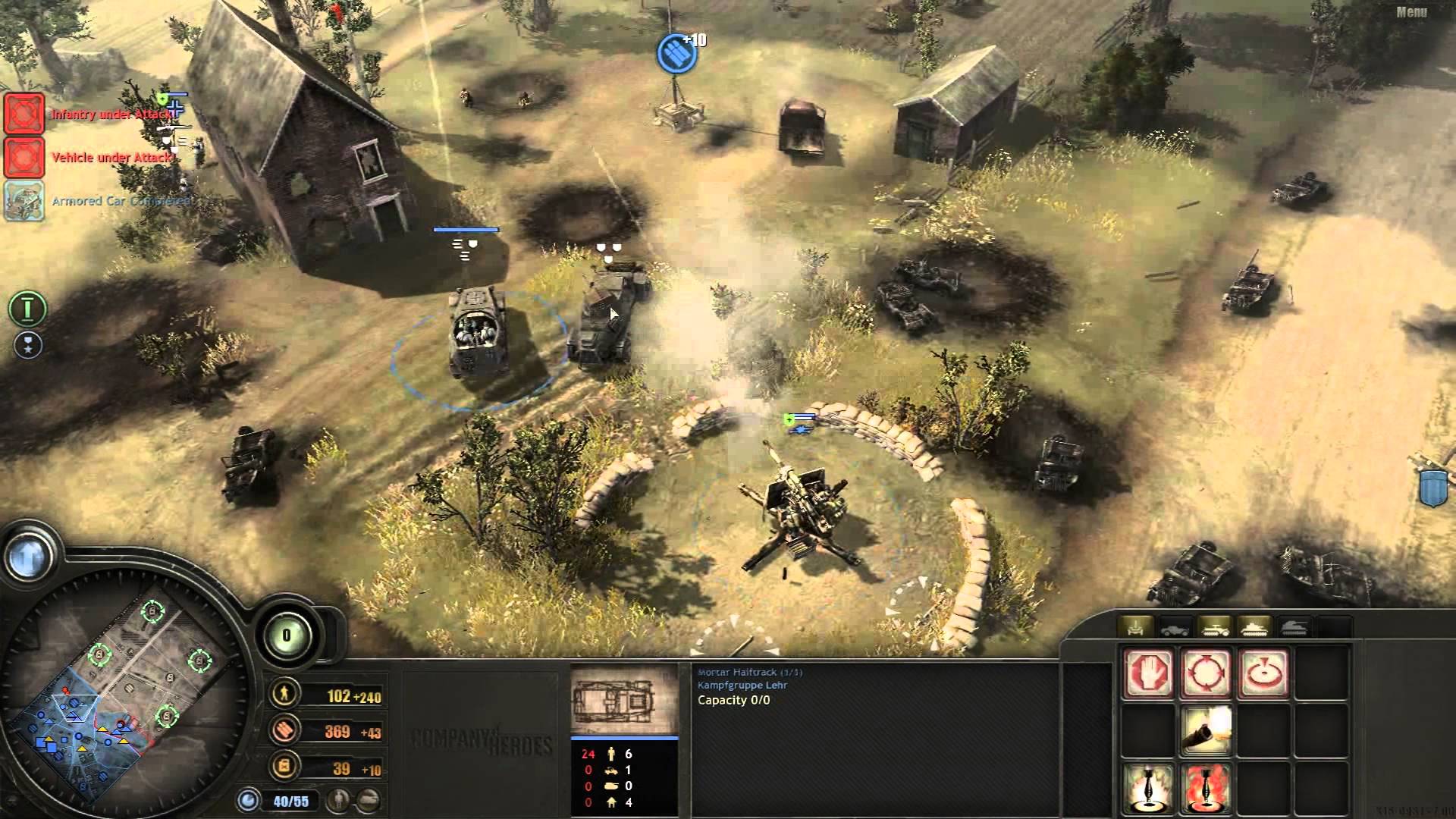 Rome - Total War is arguably the best of the Total War series. Rome - Total War mixes high level turn-based strategy with intense tactical battles featuring large squads of units. With gameplay in both modes being satisfyingly deep, and graphics that holds up remarkably well even today, and excellent replay value both in the campaign and multiplayer, Rome is a standout title in the series. 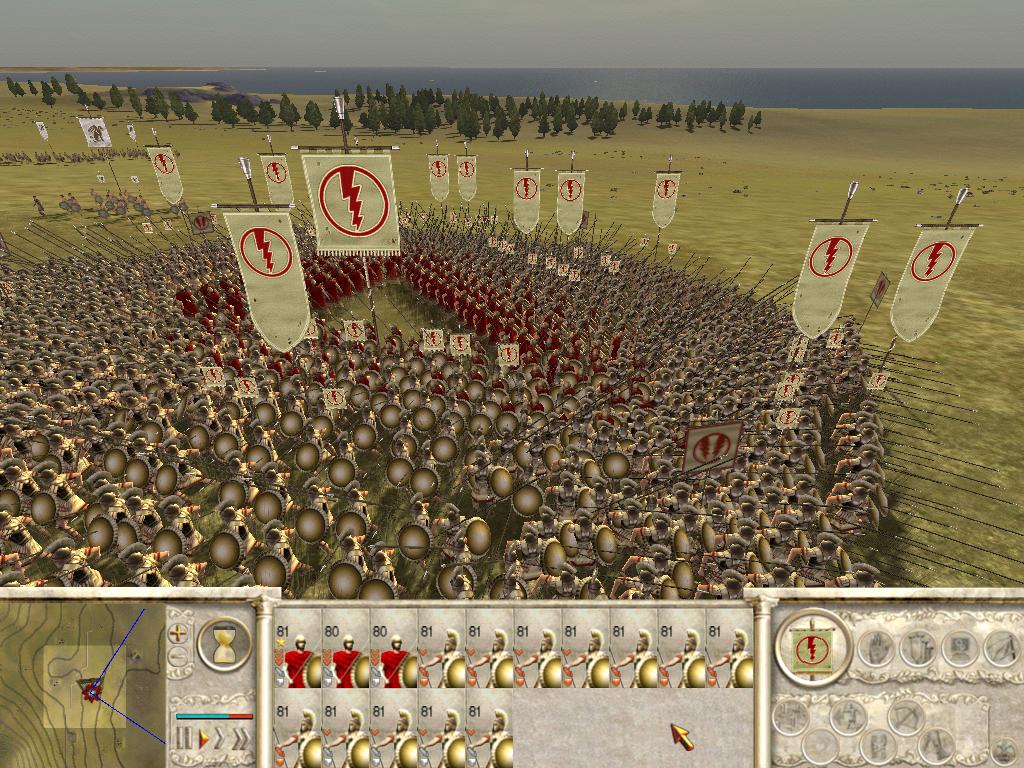 Supreme Commander is the spiritual successor of Total Annihilation. Set in the 37tth century, Supreme Commander puts you in control of one of three factions. The game focuses on large scale battles up to 1000 units, massive base building and map sizes that are epic in sizes. The player needs to focus more on strategy than tactics due to the sheer number of units and map size. The unfortunate factor is after playing this game, all other RTS games fail in comparison. 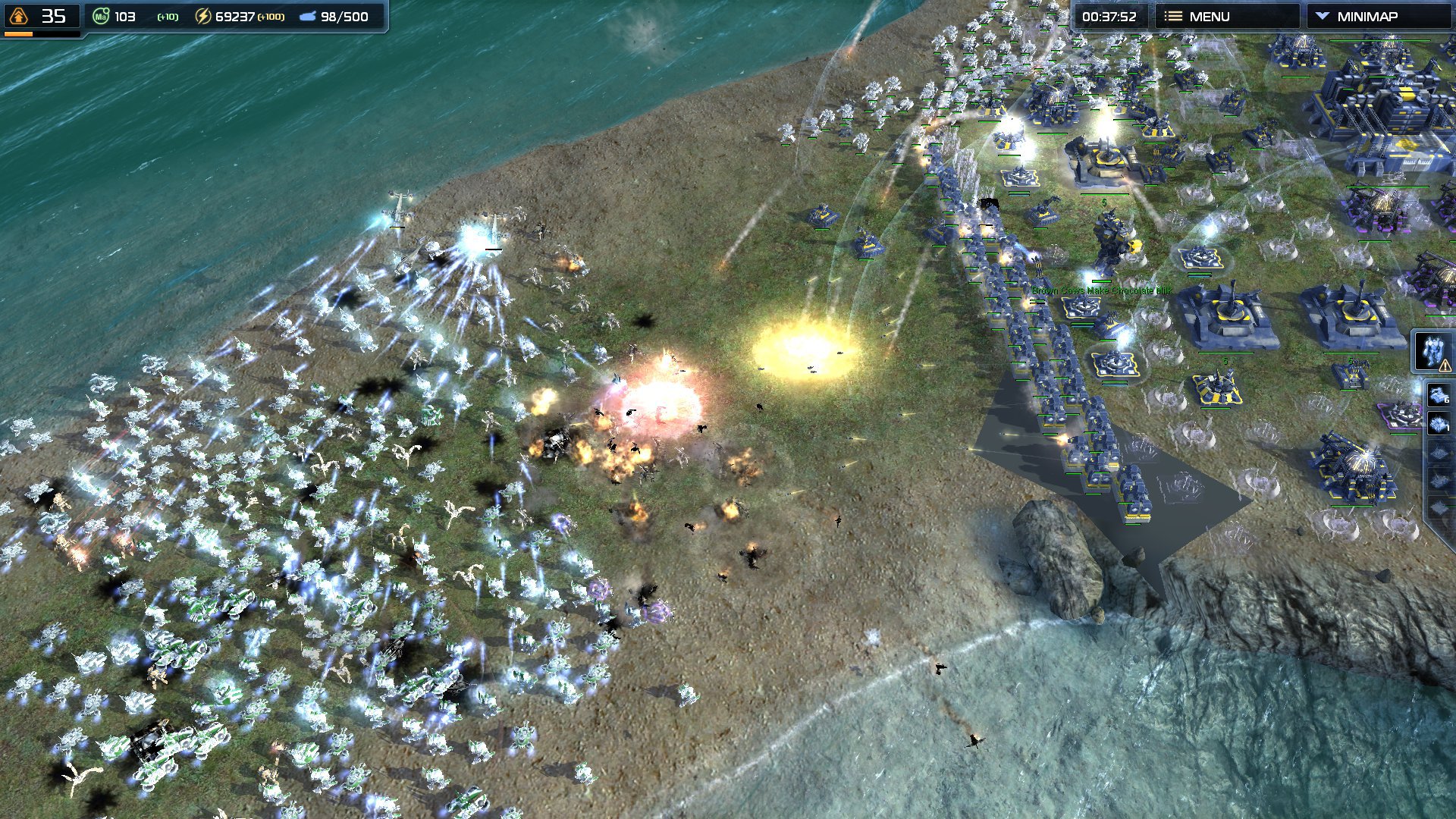 Rise of Nations is unique in that it takes several concepts from turn-based strategy games such as territories and attrition warfare. A player can advance from Ancient Age to Information Age and the gameplay focuses heavily on creating a balance between offense, defense, and economy. Rise of Nations was shown in 2008 to improve a variety of "critical cognitive skills", most prominently working memory and task-switching ability, in older adults. 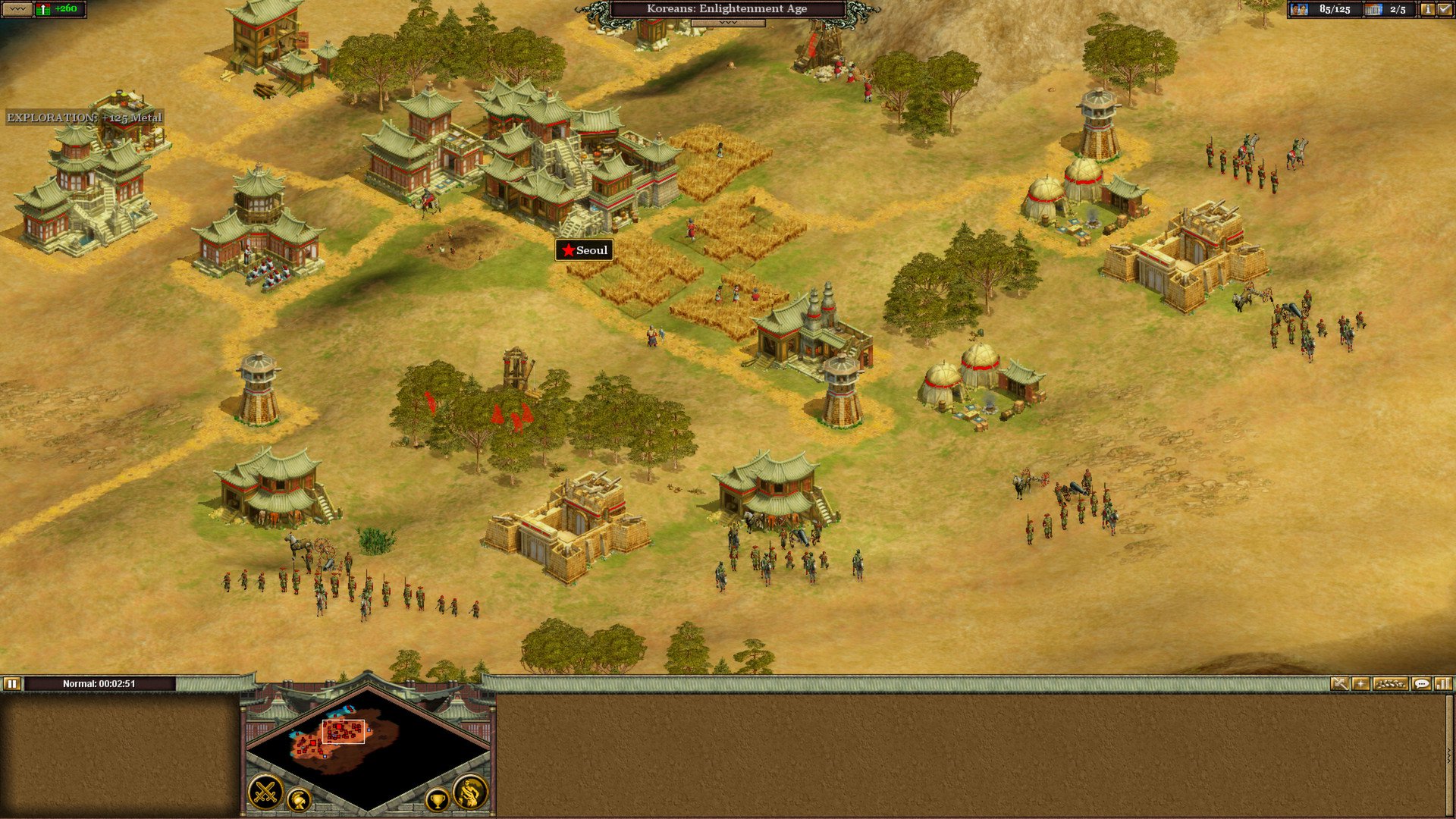 9. Sins of a Solar Empire

Sins of a Solar Empire is another great game that incorporates some elements of 4X Strategy Games. The playing field is a 3D web of planets and other celestial objects in the orbital plane of one or more stars. The game features a sandbox mode, allowing the player to choose different types of solar systems to unlock achievements. Players can conquer neighboring planets using military, economic and diplomatic means and explore distant star systems in a massively scaled, fully 3D environment featuring entire galaxies, orbiting planets, clusters of asteroids, space dust and radiant stars. 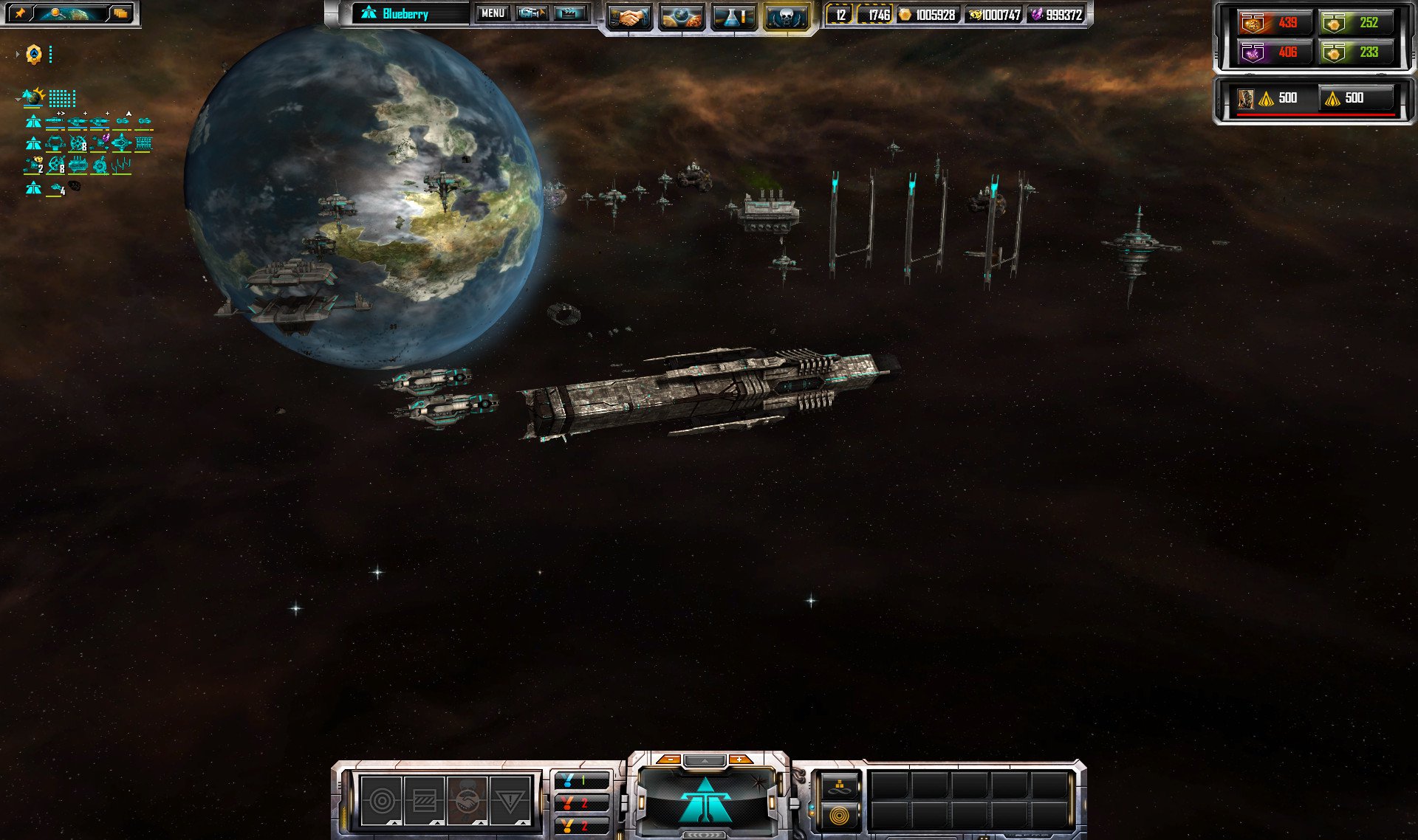 The gameplay in Warhammer 40,000: Dawn of War II is different than its predecessor and it combines the best of original and Company of Heroes. Players take command of one of four factions, Space Marines, Eldar, Orks and Tyranid as they battle for supremacy in the Warhammer Universe. The game includes a non-linear single player campaign that can be played with a friend in co-op mode as well as a full multiplayer mode in which players can battle in skirmishes against other factions. 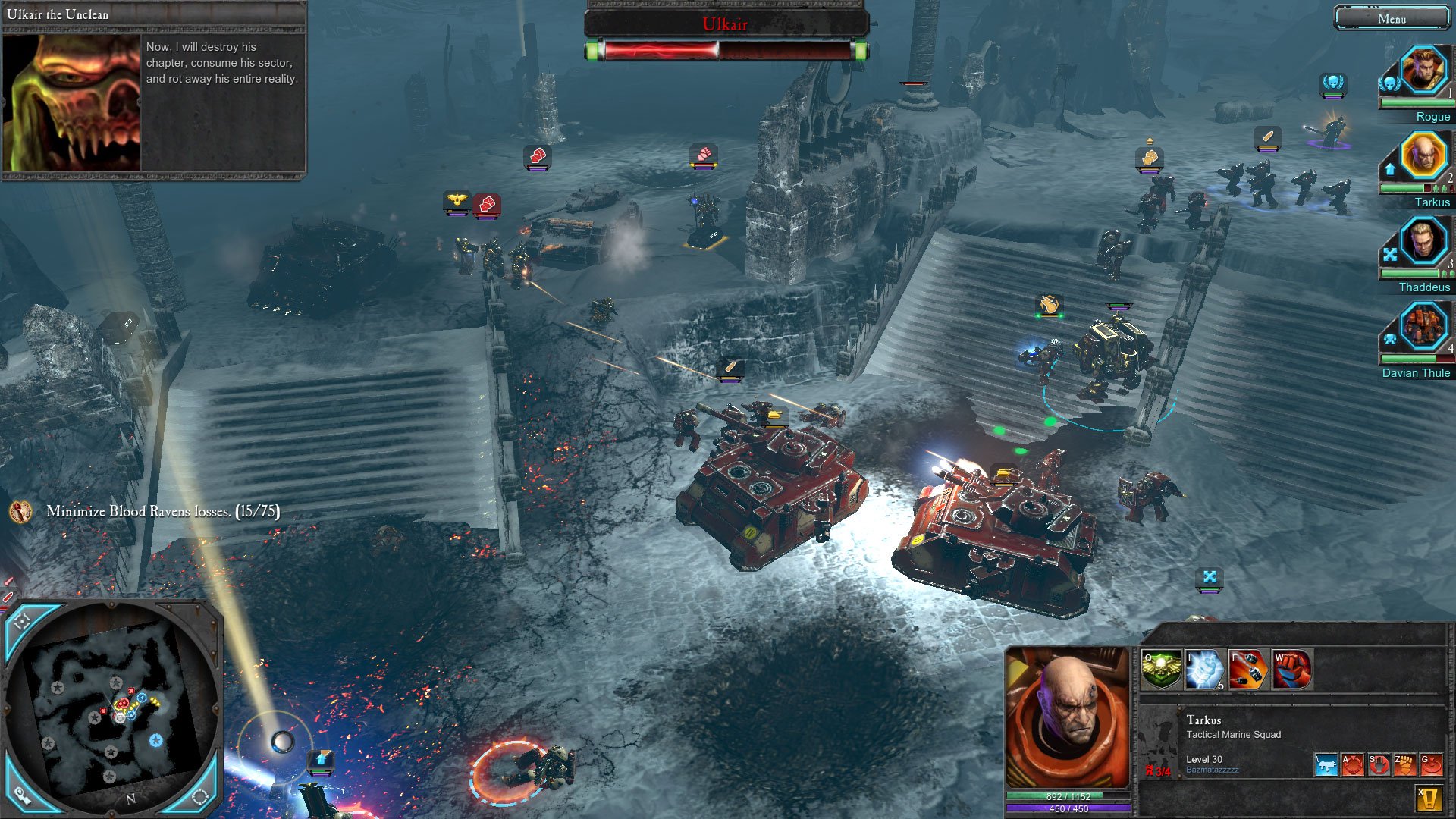 The granddaddy of RTS. This is the game that defined many of the features in the current generation of RTS games. Developed by Westwood Studios, this game is responsible to a large degree for features such as resource gathering, the mini-map, construction dependencies (or a tech tree), interactive terrain and more. Visually, it might not look like much in this modern era of gaming, but we owe the very shape of the genre to this game. 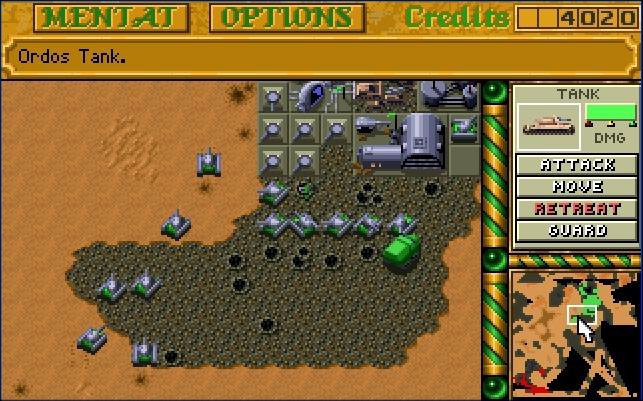 This is another old 2D game that took the concept of RTS to next level. Total Annihilation features terrain values that allowed it emulate three dimensional surfaces. In addition, it also features physics-based projectiles, explosions, and unit wreckage, underwater structures, gravity calculations, radar (which reveals the locations of units in fog of war without revealing the terrain, radar jamming (to hinder radar apparatus) and a score of other innovative features. In addition, to top it all off, this game was the first to offer single battlefields with hundreds or thousands of active units. 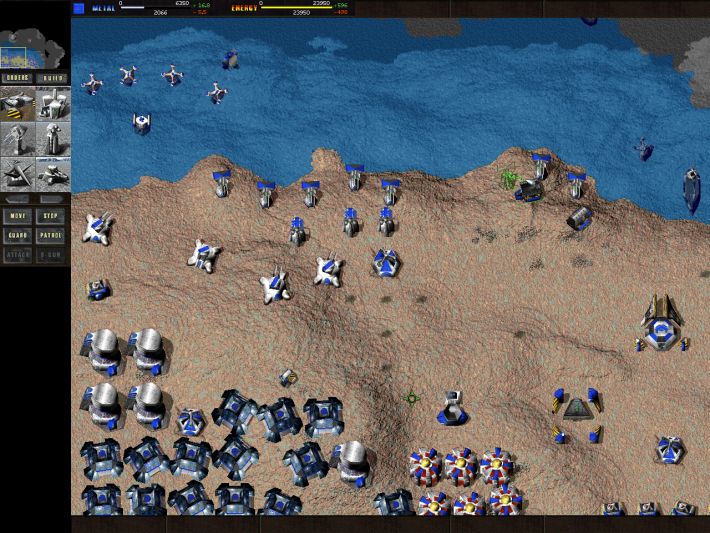