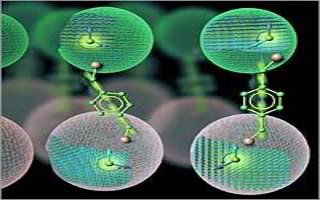 Newton did see an Apple falling from the tree

His solutions revolutionized the physics.

Even in this 21st century the plastic remains as a threat to the environment. Why the plastics cannot be decomposed? What are the alternate measures we have to take? Why cannot we reuse the plastics? On thinking about this we got the idea of plastic hard disk.

The plastic shows promise to the computer memory. The plastic has atoms in which the electrons have its own spin motion (clockwise or anti clock wise). This spin is used to store the data.

On implementation of plastic hard disk we can expect an Demand for the plastics in future.

The plastic materials are difficult to decompose. These are made up of large number of atoms which has sub atomic particles. These materials will have its own spin motion that is used to store data.

"Poly" means "many" and the "mer" is the basic building block of the polymer. So essentially a polymer is "many mers". And they can be very many. Most polymers are poor conductors, but some special ones have been designed to conduct electricity. Polymers are lightweight and corrosion resistant. However, they cannot usually withstand high temperatures. Since they often consist of carbon-carbon chains, the starting point for their production is petroleum or a petroleum derivative. Chemists often characterize polymers by their molecular structure, but engineers find the three basic classifications (thermoplastic, thermosetting, and elastomers) to be more useful.

PLASTIC POLLUTANT chemicals found in television sets, phones and computers could be causing brain damage in children. Two studies suggest that the chemicals, used to make flame-retardant plastics, may passed on to babies through mothers' breast milk. The pollutants are thought enter the environment when electrical goods are thrown away and incinerated. Environmentalists described the flame retardants as a 'ticking timebomb' and called on the Government to ban them.

The scare centres on brominated flame retardants (BFRs) - a family of chemicals blended with plastics and commonly found in printed circuit boards, casings and some textiles. Once the circuit boards and plastics have been burned or buried, the pollutant chemicals are carried by air, soil or water. It is believed they can also enter the food chain through crops and livestock.

Environmentalists are launching a campaign to rid the of plastic bags which threaten coral and fish, dolphins, hundreds of different species of fish and spectacular coral. But environmentalists say the Red Sea's marine life is under threat from an array of pollutants - from phosphate factories to plastic bags. The group says plastic bags take 1,000 years to decompose on land and 450 years to decompose in sea water. Plastic threat "People don't dispose of them properly and then they blow in to the sea and choke the corals and fish,".

When the plastic materials are buried in the soil, it take hundreds of years to decompose. This will affect the roots of trees, and the water quality. When the plastic materials are burnt in air, which releases harmful chemicals which affects the environments. Some disasters like acid rain, ozone depletion takes place. We got an idea of effective reutilization of plastics, Plastic hard disk.

Spintronics (slide) is a new branch of electronics in which electron spin, in addition to charge, is manipulated to yield a desired outcome. All spintronic devices act according to the simple scheme: (1) information is stored (written) into spins as a particular spin orientation (up or down), (2) the spins, being attached to mobile electrons, carry the information along a wire, and (3) the information is read at a terminal.

Spin orientation of conduction electrons survives for a relatively long time (nanoseconds, compared to tens of femtoseconds during which electron momentum decays), which makes spintronic devices particularly attractive for memory storage and magnetic sensors applications, and, potentially for quantum computing where electron spin would represent a bit (called qubit) of information.

Though spintronics technology has yet to be fully developed, it could result in computers that store more data in less space, process data faster, and consume less power. It could even lead to computers that boot up instantly.

Spintronics uses magnetic fields to control the spin of electrons. The magnetic field is used to make nearly all the moving electrons inside a sample of plastic spin in the same direction, an effect called spin polarization. Achieving spin polarization is the first step in converting the plastic into a device that could read and write spintronic data inside a working computer.

Theoretically, inexpensive ink-jet technology could one day be used to quickly print entire sheets of plastic semiconductors for spintronics.

The advent of plastic electronics opens up many opportunities for new technologies such as flexible displays and inexpensive solar cells.

Normal electronics encode computer data based on a binary code of ones and zeros, depending on whether an electron is present in a void within the material. But in principle, the direction of a spinning electron -- either spin up or spin down -- can be used as data, too. So spintronics would effectively let computers store and transfer twice as much data per electron.

Once a magnetic field pushes an electron into a direction of spin, it will keep spinning the same way until another magnetic field causes the spin to change. This effect can be used to very quickly access magnetically stored information during computer operation -- even if the electrical power to a computer is switched off between uses. Data can be stored permanently, and is nearly instantly available anytime, no lengthy boot up needed.

Plastic spintronics would weigh less than traditional electronics and cost less to manufacture. Todays inorganic semiconductors are created through multiple steps of vacuum deposition and etching. Using plastic may solve another problem currently faced by developers: spinning electrons must be able to move smoothly between different components. But traveling from one material to another can sometimes knock an electron off-kilter. Data encoded in that electrons spin would be lost. For this reason, transferring spinning electrons through a layered stack of different magnetic and non-magnetic polymers.

Ferromagnetic metals are the obvious first choice as a source of spin-polarised electrons Since the ferromagnetic moment reflects an imbalance of the up and down electron spins in the conduction band. Spin polarization P is defined in terms of the density of states of spin up and spin down electrons at the Fermi Energy.

The Spin Polarization P for Fe, Co or Ni is approximately 0.45; for half-metals it should be 1

Giant Magnetoresistance (GMR) was diskovered by Albert Fert's group in Co/Cr multilayers. It is the basis of the spin valve read head which is in common use in hard drives. 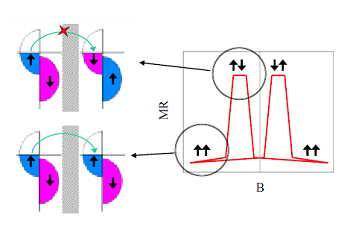 The resistance depends on the relative magnetic orientation of the layers which can be changed from parallel to antiparallel by an applied magnetic field, as shown for a MTJ in the picture:

The Magnetoresistance (MR) of a MTJ is described by Julliere's formula which depends on the spin polarization P1 and P2 of the two magnetic layers:

The response is maximised by using half-metals with P-1.

Contacts between crystallites of ferromagnetic metals can themselves be either metallic of insulating tunnel junctions. In a pressed powder, the resistance is dominated by the most resistve contacts along a critical path. A large change of resistance in a low magnetic field (PMR) is associated with the magnetization process of contiguous ferromagnetic grains.

Most work has been done on two-terminal transistor magnetoelectric devices (magnetoresistor, spin valves, tunnel junctions) which are operated by an external magnetic field. However, there are good prospects for developing three terminal devices (spin transistors) and for using spin polarized current instead of an external field to do the switching. 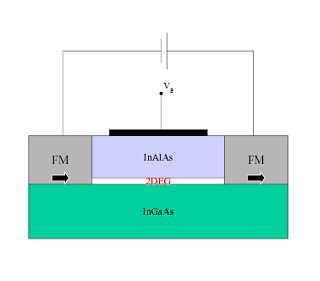 A conducting plastic has been used to create a new memory technology with the potential to store a megabit of data in a millimetre-square device - 10 times denser than current magnetic memories. The device should also be cheap and fast, but cannot be rewritten, so would only be suitable for permanent storage.

The device sandwiches a blob of a conducting polymer called PEDOT and a silicon diode between two perpendicular wires. Substantial research effort has focused on polymer-based transistors, which could form cheap, flexible circuits, but polymer-based memory has received relatively little attention.

The key to the new technology was that passing a high current through PEDOT turns it into an insulator, rather like blowing a fuse. The polymers two possible states, conductor or insulator, then form the one and zero necessary to store digital data.

"The beauty of the device is that it combines the best of silicon technology - diodes - with the capability to form a fuse, which does not exist in silicon,"

However, turning the polymer INTO an insulator involves a permanent chemical change, meaning the memory can only be written to once. Its creators say this makes it ideal for archiving images and other data directly from a digital camera, cellphone or PDA, like an electronic version of film negatives.

PEDOT's ability to conduct electricity means it is already used widely as the anti-static coating on camera film. But until now, no one suspected that it could be converted into an insulator. The material is a blend of a negatively-charged polymer called PSS- and a positively-charged one called PEDT+. Having distinct, charged components allows it to conduct electricity and means that it is water soluble.

Without the negatively-charged PSS- to stabilise it, PED+ in turn grabs on to an extra electron and also becomes neutral, converting PEDOT into an insulating polymer.

To store the memory, the wires and the diode surrounding the PEDOT blob to run either a high or a low current through it. This either creates an insulator or leaves it as a conductor. To read the memory, they run current through the top wire and measure the current in the bottom wire. No current means the bit is a zero, and vice versa. For a memory application, the device will need many more.. In this way, they can read and write multiple bits to one device. A grid system is commonly used in display screens to switch individual pixels.

Thus the data are written in plastic molecules based on their spin motion. The quantum number for the clockwise rotation is found to be +1/2 and for the anticlockwise rotation is -1/2. Thus parallel and antiparallely polarized electrons are used to store the data. In the current day semiconductor hard disk the data are written in the form of zero and ones. Thus the spintronics efficiently replaces the semiconductor device with the use of plastics.