Scientists Believe A Huge Planet IS Hiding Within Our Star System. Could Be Planet 9 / Planet X?

According to a recent report, Scientist believe an undiscovered huge planet about ten times as massive as Earth might be rotating our sun at the edge of our solar system without ever being seen.

While the existence of the planet has not been confirmed visually, it is theorized based on watching the way that dwarf planets and other objects in the outer solar system move and they believe their orbits seem to be disturbed by something huge but hidden sitting out there.

The theory about this mysterious planet is suggested by Michael Brown and Konstantin Batygin and published it in the Astronomical Journal. One of the two scientists, Michael Brown is also the scientist who removed Pluto's status as the ninth planet and called it a 'dwarf planet'.

These two scientists found that certain objects in the Kuiper Belt like the field of icy objects and debris beyond Neptune had orbits that peculiarly pointed in the same direction. Over time, mathematical modeling and computer simulation led them to the conclusion that a planet was exerting the gravity necessary to shape these orbits.

Their theory is based on studying the orbits of Sedna and five other Kuiper Belt Objects(KBO) all of which has elliptical orbits exclusively beyond Neptune (magenta) and all mysteriously line up in a single direction in physical space, and lie in approximately the same plane. Such an orbital alignment would only occur with 0.007% probability by chance alone. Considering this, Batygin and Brown believes such an unusual orbit can only be maintained by a planet with 10 times the mass of Earth.

If their theory is right and if planet exists, it is thought to be about ten times as massive or three times as large as Earth. It would also orbit our sun in an elliptical orbit at a great distance, that it would be around 200 to 300 times as far away from the sun as we are when it gets closest to the star. Due to its larger orbit, the planet may probably take about 20,000 years to orbit our sun.

Brown also claims that if the new object exists and is confirmed to have the effects observed, it needs to be even more massive if it is further away. He thinks that no matter where it is speculated to be, if it exists, then it dominates the outer edge of the Solar System, which is sufficient to make it a planet by current definitions. 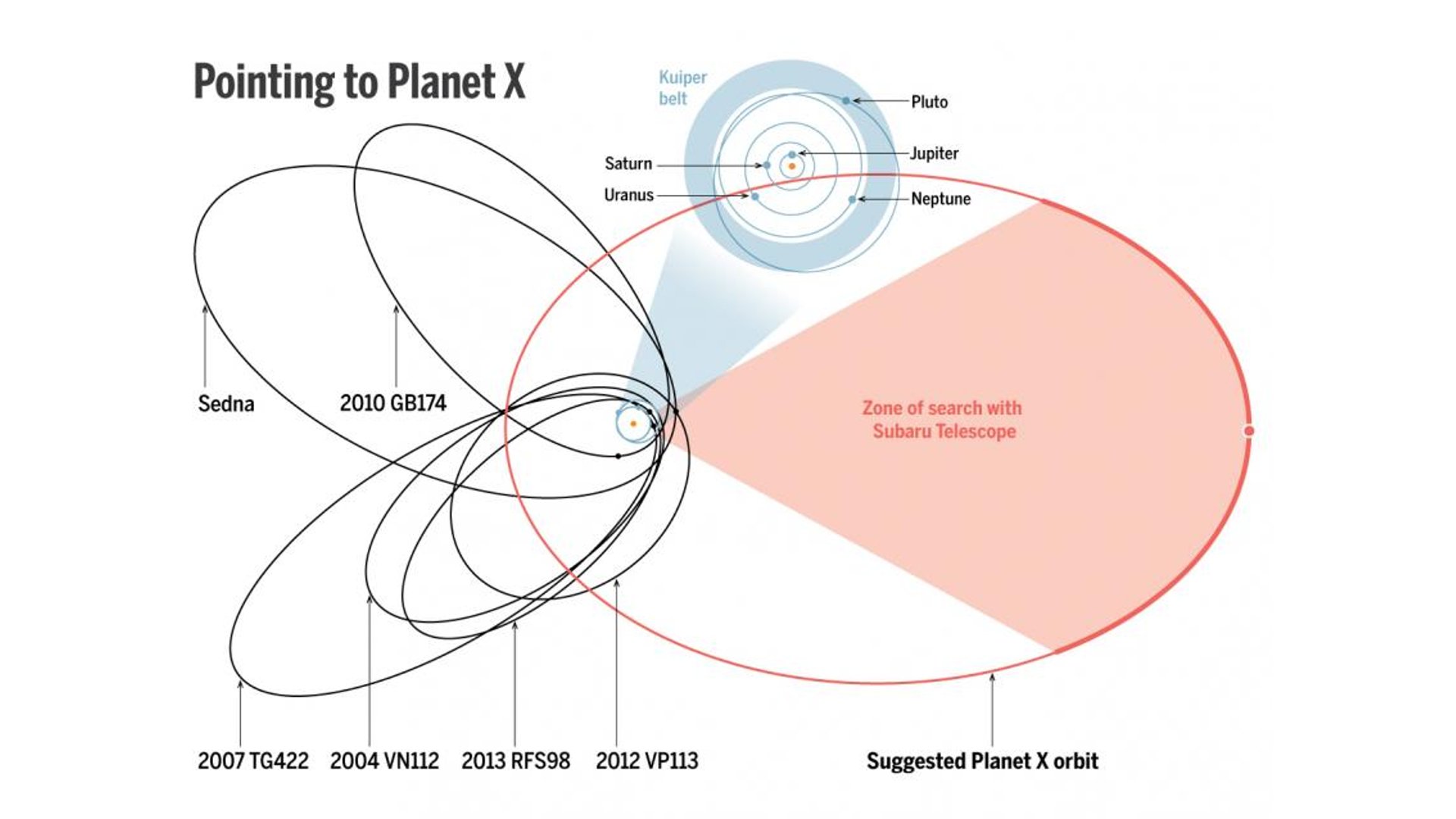 At such distances, the planet could be impossible to spot. While most telescopes capable of seeing a dim object at such distances, such as the Hubble Space Telescope or the 10-meter Keck telescopes in Hawaii, have extremely tiny fields of view. It would be like looking for a needle in a haystack by peering through a drinking straw. In addition, the planet radiates so little light that it might never make it back for us to see. It is also surrounded by much brighter lights, for example, even the distant Pluto could be about 10,000 times brighter than this hypothetical planet.

Batygin and Brown are currently using Subaru, an 8-meter telescope in Hawaii that is owned by Japan. It has enough light-gathering area to detect such a faint object, coupled with a huge field of view that is 75 times larger than that of a Keck telescope. This huge field of view allows astronomers to scan large swaths of the sky each night. Batygin and Brown are also coordinating their efforts with their erstwhile competitors, Sheppard and Trujillo, who have also joined the hunt with Subaru. Brown says it will take about 5 years for the two teams to search most of the area where Planet Nine could be lurking.

Batygin and Brown also predict a yet-to-be-discovered population of distant objects. These objects would have semi-major axes greater than 250 AU each, but they would have lower eccentricities and orbits which would be aligned with Planet Nine. The larger perihelia of these objects would make them fainter and more difficult to detect than the anti-aligned objects.

Even if the can prove the existence of this hypothetical planet nine, there is no way we can visit this planet any time soon. It took almost a decade just to reach Pluto and it could take half a century or more to journey to Planet 9 with present technology. In addition, it will also be harder to explain how such planet is formed within our solar system.

A ninth planet has long been hypothesized and become the basis of some conspiracy theories originally going under the name Planet X. It was first talked about more than a century ago, and looking for that planet was what brought astronomers to find Pluto.