Samsung has just announced the Galaxy S6 here at MWC 2015, and it seems that the Korean giant has finally brought a much needed update to Samsungs design language.

The Galaxy S6 is the first phone from the series that doesn't utilize materials of questionable quality. You heard that right - this is the end of cheap plastics and colored parts that lose their brilliance after a while (and after a few accidental hits). The new phone's exterior comprises two tempered glass pieces, courtesy of Gorilla Glass 4, fused into a whole with a solid metal frame. The glass panels, as you can imagine, pick up fingerprints really easily, but they do make the phone non-slippery and premium-feeling. The frame itself has been carefully shaped, so that there are no sharp edges to create discomfort while holding the phone. 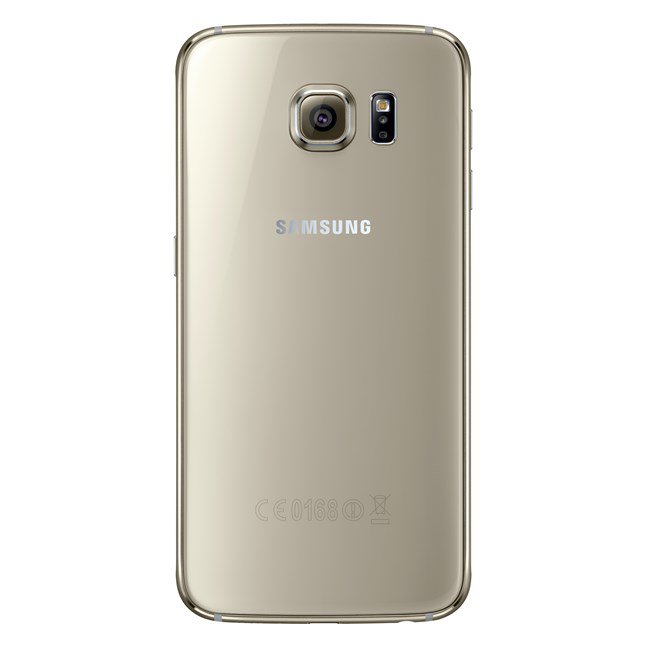 In terms of design, the Galaxy S6 has a familiar home button - complete with upgraded touch-based fingerprint reader - that's flanked by capacitive menu and recent apps buttons. You'll also find staple features on the device like the heart rate monitor. Looking at the front or even the back of the phone, there's no mistaking this for anything other than a Galaxy. For fans of waterproofing tech, it should be mentioned that this is one area that the Galaxy S6 doesnt come through, though an "Active" model is rumored to be coming our way at some point in the future.

The audio jack, USB port, and speakers are all placed on the bottom edge of the Galaxy S6, which features plastic inserts to let radio waves through. Coming to the sides, you'll find the traditional Samsung button layout, with the volume rocker on the left and a power button on the right. 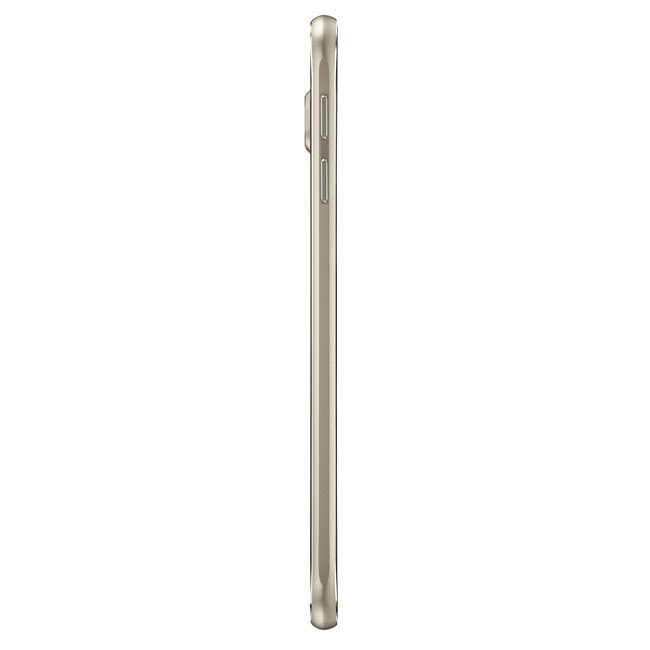 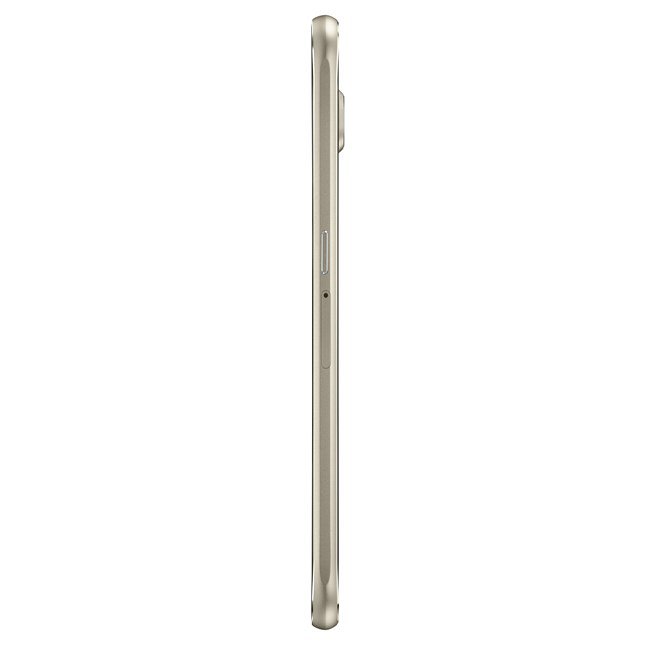 On the back you'll find that the most striking design feature, aside from the obvious addition of glass, is redesigned camera and flash modules. The metallic accents look nice, but unfortunately the camera protrudes quite a bit, so you may have a hard time using this device on a flat surface, especially without a case. That's a sacrifice that Samsung needed to make in order make the Galaxy S6 just 7 millimeters thick. It is worth noting that the Galaxy S6 does feel a lot more manageable in the hands from its predecessor, as the phone is both lighter and the bezels are now smaller when compared to the Galaxy S5.

The screen size has been kept the same - the panel measures 5.1 inches in diagonal, resulting in a spacious, yet perfectly reasonable canvass. The resolution, however, has been pumped all the way up to QHD, or 1440 x 2560 pixels. You can imagine that this leads to a staggering pixel density - in the Galaxy S6's case, we're talking about the mind-blowing 577 pixels per inch. Yes, the display is unbelievably sharp. It's very nice, although we can't really say that the difference from 1080 x 1920 is that big, but you know, if the hardware can take the additional load without significant compromise with regards to battery life and performance, we guess it doesn't hurt having those extra pixels packed in there.

The Galaxy S6 is going to rely on Samsung's traditional screen tech of choice: Super AMOLED. It took a while for the manufacturer to reach a good level of color accuracy with its AMOLED displays, but now that the Galaxy S6 is here, it looks like the company is looking to solidify the good impressions that it made with the Note 4 and Note Edge. Samsung has made huge strides with OLED technology, and the Galaxy S6 is truly the epitome of that. The difference between QHD and Full HD at this screen size might be hard to detect with the naked eye, but it's still nice to see Samsung raising the bar on just about every level.

Quite some effort has been put into the Galaxy S6's chips, too. It's not certain if there's going to be a Snapdragon version yet, but Samsung does talk up its new Exynos SoC pretty heavily. And looking at the specs sheet, there sure is a reason for Samsung to be proud of it. Powered by a total of eight cores, and made using a cutting-edge 14 nm process, the new Exynos is expected to blow most other mobile SoCs out of the water. Did we mention that it's a 64-bit chip, too? Yep, it seems like Samsung isn't willing to make compromises with regards to the internals of its upcoming flagship. However, things get even better, when you factor in stuff like faster internal memory and faster system memory. In terms of capacity, storage space variants will be a bit beefier than before: 32 GB, 64 GB, and 128 GB. That's good, seeing that there's not going to be a microSD card slot present on the device. Meanwhile, the 3 GB of RAM should prove to be just enough to allow for the smooth operation of the system, even when using some of the more demanding features, such as the multi window mode.

The Galaxy S6 has a non-removable 2,550mAh battery this time around, which is 250mAh less that the Galaxy S5's battery. However, the 14nm processor and other optimizations may keep battery life on par with the previous generation. Well need ample time to test out the S6's battery before we make any assumptions, so you can look for full battery stats in our final review. However, a nice change that will be welcomed by most users is the addition of fast charging technology. Samsung quotes that the device will have up to two hours of video playback on just ten minutes of charge, with a full charge reached in around 80 minutes.

There is no microSD card slot on the device. These features have been staples of Galaxy devices so far, and it remains to be seen how users react to their removal. While the removal of the SD card slot will disappoint many users, it's nice to see Samsung combat the change with a bump up in internal storage options. Additionally, wireless charging is finally built-in the Galaxy S6, and with a twist: the Galaxy S6 is the first phone to support the several standards on the market (WPC and PMA). This means the phone will work with just about any charging pad.

Samsung is traditionally very strong in the mobile camera department, and by the looks of it, the Galaxy S6 will attempt to further solidify Samsung's leading position in this regard. Same as before, the camera resolution is 16 MP, but there is a respectable host of new features involved. One of the more intriguing ones is optical image stabilization, in addition to reat-time HDR, infrared white balance (should work more efficiently than standard white balance), and tracking auto-focus for the video camera. Besides the mandatory cleanup work in the camera application, Samsung has made sure to upgrade its camera module a bit - the 16 MP resolution will be accompanied by a wide, F1.9 aperture now, promising to deliver better low-light image quality than that of the Galaxy S5 (its aperture was F2.2). The camera app itself is also extremely fast to launch - you can even call it by double-pressing the home button now. The reason why the camera app is so quick to start is because it never gets cleaned up from the system memory - it's always running in the background. Thankfully, Samsung promises that this isn't supposed to introduce any battery or performance issues, thanks to its software optimizations.

One thing we feel is certain - once the Samsung Galaxy S6 launches on the market, it's going to be one of the best, if not the best camera phone around.

With Android 5.0 Lollipop, Samsung's Galaxy S6 is going to be well-positioned to showcase the progress of Google's operating system. After all, it's shaping up as a state of the art device - packed with all kinds of features, yet showing care for things like refinement and stability. Having said that, Samsung has once again promised to take the path of 'more is less' with this latest version of TouchWiz UI, and while we can definitely see some of the simplifications and enhancements made by the company, the bulk of the software's previous versions is mostly still going to be present. Don't think that you'll be tapping and swiping your way happily without the phantom presence of air gestures, dual window mode, or some of the other 'extra features' that the manufacturer has generated over the years. Most of those things are going to still be available with the Galaxy S6, but at least the company has tried to hide them even deeper, under a bunch of settings and menu screens. 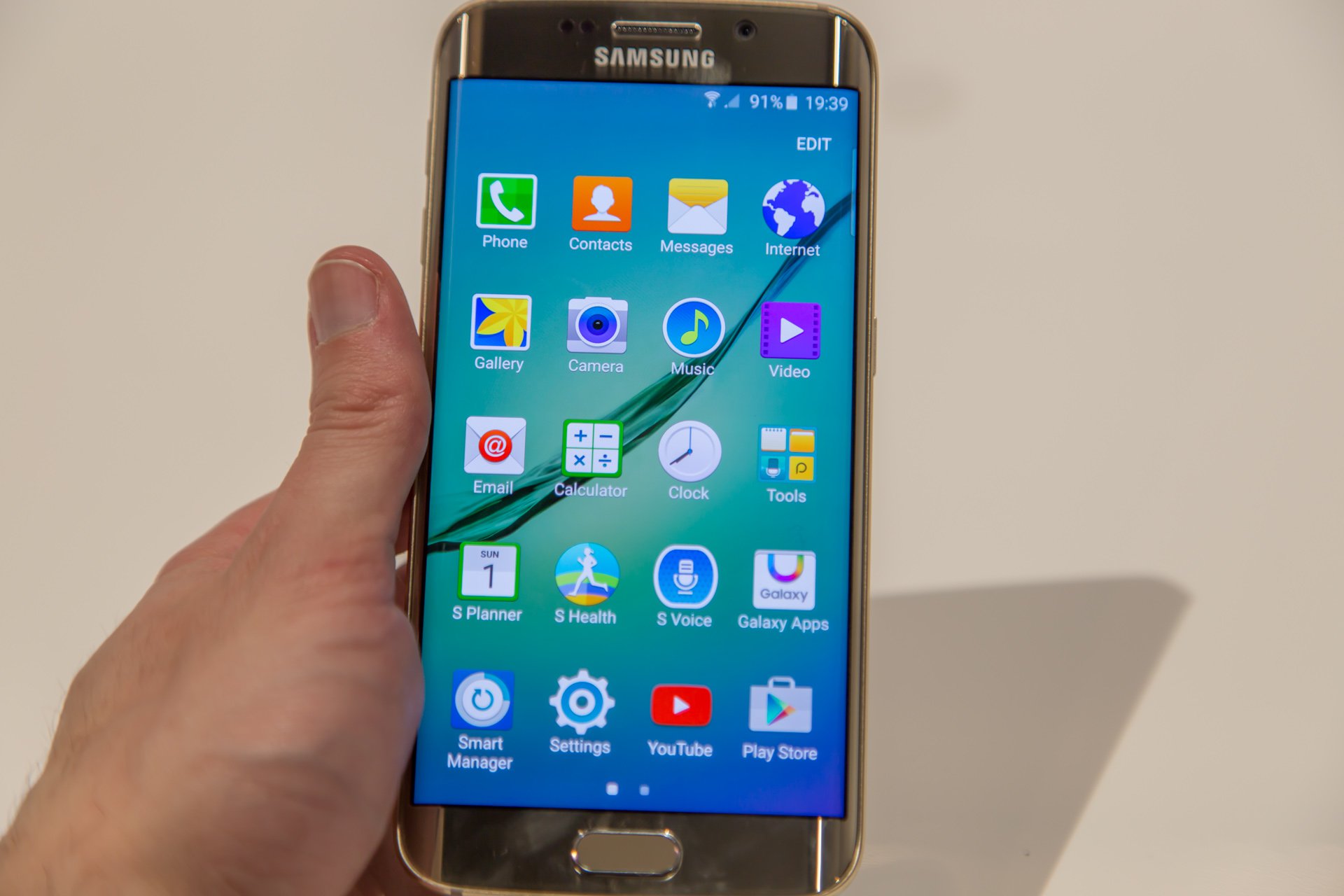 Enabling one-handed usage has been among the main priorities for Samsung while refining TouchWiz, and we can say that the Galaxy S6 is a top performer in that department. Its compact size, mixed with sizable icons and other user interface elements, make for an experience that facilitates easy and quick usage with just one thumb. Of course, more advanced tasks will still require you to use two hands, but when it comes to simple stuff like checking your email, checking the weather, or calling a contact, using one hand should be sufficient.

The Samsung Galaxy S6 will be the first phone to feature Samsung's new Pay service, which, as you might guess, is an alternative to Apple Pay. Right now, Samsung has completed deals with Visa and MasterCard, but it's yet to expand that partnership to other major players, such as American Express, Bank of America, or Chase. However, the company reassures that it's working on it. Easily the most interesting thing about Samsung Pay is the new Magnetic Secure Transmission (MST) proprietary technology, which is said to widen Samsung Pay's compatibility with shopping terminals significantly. In addition to NFC for making contactless payments through terminals that support near field communications, Samsung Pay will also be able to communicate with traditional magnetic stripe terminal, thanks to MST.

Users will be able to use Samsung Pay to buy various goods in a quick and secure way, plus the whole process is promised to happen rather quickly. For example, should you wish to pay for something using Samsung Pay, you'd simply need to swipe of from the bottom bezel in order to bring up the Samsung Pay app, choose the desired card for the payment, authenticate using the fingerprint sensor, and from there, everything should be done in a matter of seconds. The bad news is that Samsung Pay will not be available to use with the Samsung Galaxy S6's launch, as the service will be enabled sometime during the summer, first in the Unites States and South Korea, followed by Europe and China a bit later.

Samsung's tremendous global success in terms of device sales and market share, it has never offered my personal favorite Android hardware. The Galaxy S6 and Galaxy S6 edge actually stand a good chance of earning that distinction this time around, thanks in large part to a design that finally screams 'premium' when touched or held.

The Galaxy S6 will be available in Black, White, Gold or Blue. Samsung has yet to release pricing details and an exact launch date, but we'll be sure to update you when we get more information.

Here is your Samsung Galaxy S6 Edge Hands On