Samsung Galaxy Note 4 is delivering poor performance than Apple iPhone 6 Plus according to the report on Apple Insider. While boasting an octa core processor and high resolution display, Galaxy Note 4 falls short in running GPU intensive apps and games comparing with iPhone 6 Plus.

They released a benchmark details as a proof for this one, which shows off the actual performance users will get from the Galaxy Note 4 highlights that Samsung appears to be making the wrong choices and that the conventional about Samsungs advantages in operating its own chip design and fab are also a mistake.

They told many things as a bad choice by Samsung. iOS app developers have had a much easier time managing the changes in resolution, so they can focus on new apps and features rather than testing across a broad range of configurations. That's apparent in the fact that nearly all new apps and games appear for iOS first, and only arrive on Android later after they've proven to be broadly popular in the App Store.

By pushing resolution numbers so fast (and without any regard for whether having more pixels actually makes a discernible, qualitative difference), Samsung has pushed screen technology ahead of its own processor capabilities, resulting in extremely poor performance in high definition.

AppleInsider noted that Apple's own leap to a Retina HD 1080p screen on iPhone 6 Plus resulted in graphics that were in some cases slower at their native resolution than last year's iPhone 5s: rendering a challenging OpenGL ES 3.0 3D scene dropped frame rates from 24.4 to 19 fps.

Samsung's own even-higher resolution Note 4 (or equally high resolution Galaxy S5 flagship) both turn in benchmarks far lower than Apple's new 6 Plusand less than half that of last year's iPhone 5s. In terms of fps, the latest benchmarks show that Samsung's new Exynos-powered Note 4 drops down to 10.5 fpsalmost half that of iPhone 6 Plus in the same test.

Looking at the fairly decent, low level theoretical scores of the GPUs Samsung uses (combined with much higher clock rates and more RAM), it appears that the company's devotion to extremely high resolution numbers is a spec list checkmark (rather than a real feature that benefits users) and is a primary contributing reason for poor real life scores in rendering 3D OpenGL scenes.

Samsung itself has been marketing Note 4 to less sophisticated buyers as a "for the colorful" device along the lines of Apple's iPhone 5c ads, in a series of "Love Notes" spots.

Samsung appears to have picked the wrong screen resolution for Note 4, given the horsepower of its own Exynos 5 Octa Core Application Processor, or even Qualcomm's Snapdragon 805, which Samsung will use in most international markets.

Of course, at the same time there are also a variety of other Android devices with the same 1080p resolution as iPhone 6 Plus, and they don't score as well either. That's a fact we earlier blamed on Google's Android, particularly its shoddy implementation of OpenGL that squanders the capabilities of faster chips with more cores and more available RAM. 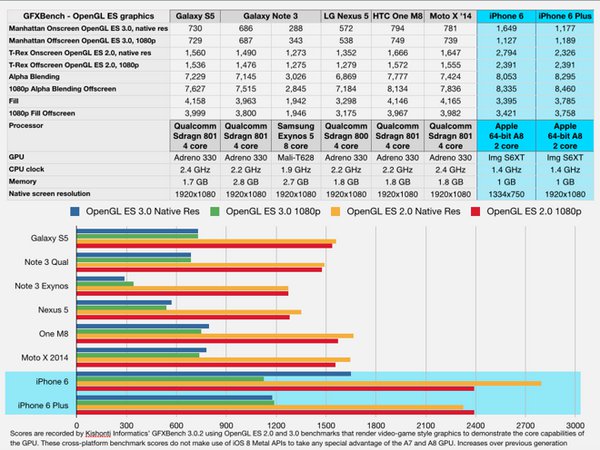 Samsung is still scrambling to bring its Galaxy Note 4 to market in the wake of iPhone 6 Plus, but initial GPU details of the Note 4 are already available on Kishonti Informatics' GFXBench website.

Specifically, the Note 4's Exynos 5433 is an ARM "big.LITTLE" design that pairs together sets of four A15 and four A7 cores, each pair designed to work at different clock speeds. Calling Samsung's Exynos "8 core" is like calling a truck "4 wheel drive" when it can effectively only power two wheels at once.

The Y of Exynos

Samsung develops its own Exynos Application Processors is so it can eventually replace Qualcomm; currently that's not possible because Qualcomm holds patents on CDMA, LTE and other advanced carrier technology.

Both Apple and Samsung use Qualcomm's baseband chips to handle wireless modem features while their own proprietary Ax or Exynos Application Processors run the rest of the phone or tablet. "This creates a smoke and mirrors marketing charade for Samsung to trumpet features of its "Octa core" Galaxy phones while actually shipping something completely different"

Apple gets Ax series for effort

Apple has rapidly outpaced the rest of the mobile chip design world. Using its volume sales of iOS devices to drive investment in better and better chips leveraging economies of scale, Apple has managed to deploy the first 64-bit mobile processors in a volume product, which also happened to be the highest volume product of last year.

Intel and ARM have made very little progress in courting business from mobile devices, and TI's OMAP processor family was abandoned when the company pulled out of the consumer mobile industry (after powering a series of low volume flops including Amazon's Kindle Fire, Nook, BlackBerry Playbook and the Google-Samsung cobranded Galaxy Nexus).

Pedal to the Metal

On top the economies of scale driving (and financing) rapid advancement of Apple's Ax series of Application Processors, the company has also developed its own Metal API as a superior performance alternative to the more general purpose, cross platform OpenGL ES and OpenCL for general computing on a GPU.

Samsung doesn't standardize on a single Application Processor family (using both its own Exynos and Qualcomm's Snapdragon chips in the same models) or even a single GPU architecture (using a mix of ARM Mali, PowerVR, and Adreno GPUs across even its latest devices), it can't replicate Apple's Metal in a way that would benefit its own products.

Metal is already seeing adoption just days after iOS 8 became available to consumers; top App Store games have been ported to Metal before even getting to Android.