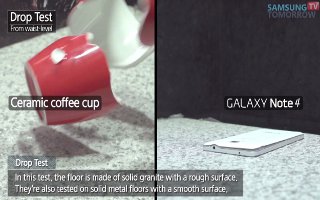 Samsung does an industrial testing on Galaxy Note 4, the device has been dropped on a metal floor at random angles from different heights, several hundred times.

To ensure the damage is minimal, Samsung perform rigorous drop tests on their devices. For its part, Samsung recently released a video shows the torturing of Galaxy Note 4 undergoes before reaching users hands.

In the video we can see the poor Galaxy Note 4 dropped on a metal floor at different heights in random angles, many more times. The most interesting is the "tumble test," in which the Samsung Galaxy Note 4 is placed into a tumbling box, simulating a fall down the stairs. In the video, we see the smartphone being compared to a soda can, which looks pretty beat up after 14 "falls," whereas the Galaxy Note 4 looks as good as new.

The video just provides insight into some of the measures Samsung takes to ensure its phones can take a hit or two, and stay in working condition.