Play On Breakfloor In Counter Strike 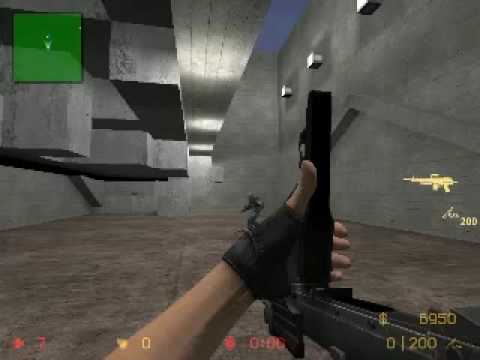 Counter Strike is an online first person shooter game and Breakfloor is a map for the game. Follow the simple steps below

Choose the right gun and team. You want to have a rapid-fire gun or something that you are good with. For example, you shouldn't choose, say, an AWP. If you're a counter-terrorist, a good gun is the M4A1. It's a rifle named Carbine something. If you're a terrorist, you'll want the best SMG or the AK47. Either team can use shotguns or the machine gun, but they're often frowned upon by many people. Experiment with the guns and try to find one you're good with for either team and either situation. You want to have the gun and be ready by the time the timer finishes counting down. If you're a counter-terrorist, put the silencer on if the gun has one.

Get a grenade or two. Flash bangs or regular frag grenades will do. This way if an enemy tries to pop in your base, you can flash them, back up, and kill them when they're recovering. The game begins. Make sure you're facing the wall with a blue rim on the top.

Listen. Don't shoot right at the beginning. It shouldn't be a stare-off, but you want to let them shoot first, unless they're not shooting until you do. Once they shoot, with the earbuds on, strafe left or right until the firing sound is coming from straight in front of you.

Once you think that you're right over the gunfire, shoot yourself down 3 blocks and look straight forward. Look for missing blocks around you to determine where they are. If you see a whole portion missing, it probably means they're standing over a ledge, waiting for you to come through. Don't just run into that. Stay underground and shoot out enemies over the blocks in the middle (An easy way to get headshots).

Go into their base. Try to be in there within 45 seconds after the round starts if you plan on rushing that round. You want to be sure that your gun isn't making too much noise for them to hear you.

Make a staircase under their base and pop up. Do a quick look around to make sure there aren't any people who will get a headshot on you. Make sure the only ones in there are teammates.

Run in their holes to get them from behind. Careful, though, if you're playing with campers, they can get you from much... unexpected angles. Make sure that when you come up from holes, you come up looking in logical angles to ensure that you shoot first.

If you haven't died by now, check holes for them and shoot to kill. If you have, spectator the enemy to see what they play like.