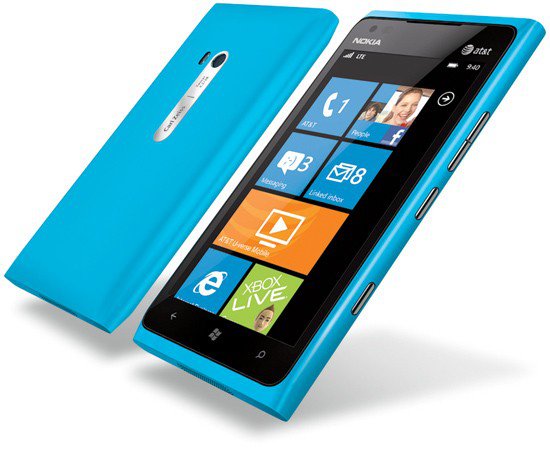 Here comes the official announcement from Nokia and AT&T on CES 2012, the device packs a 4.3-inch ClaerkBlack AMOLED 800*480 capacitive touchscreen, 512MB RAM and Mango. There is an 8MP camera around the back with a 28mm f/2.2 Carl Zeiss lens with a dual-LED flash and a front facing f/2.4wide angle lens. The polycarbonate bodied 900 got a single-core 1.4GHz Qualcomm Snapdragon CPU, and it packs LTE modem for high speed internet. There is an 1840 mAH battery for 7 hours of talk time and 300 hours standby. It will arrive in the states side in next couple of months in lovely black and can colors. There is no word on pricing yet. Dont forget to look at the video, for more details read the press release.

Here is the video

Las Vegas, US - Today at the 2012 International Consumer Electronics Show (CES), Nokia and AT&T announced the Nokia Lumia 900, the first of Nokia's Windows Phone-based range to feature high-speed LTE* connectivity. With Nokia's largest display, the Nokia Lumia 900 delivers a rich content experience from a phone that still fits easily in your hand.

Coming exclusively to AT&T in the coming months in cyan and matte black, the Nokia Lumia 900 has a 4.3-inch AMOLED ClearBlack Display for rich, bright images both indoors and out, faster connection speeds based on cutting-edge 4G LTE technology, and a long-lasting 1830 mAH battery for enjoying content all day.

Nokia's third Lumia smartphone, the Nokia Lumia 900 builds on Lumia's head-turning design on the outside and a rich social and Internet experience on the inside. People Hub is the quickest way to connect with friends with Live Tiles for real-time updates and a fast Web browsing experience with Internet Explorer Mobile.

"The introduction of the Nokia Lumia 900 with AT&T is another significant milestone in the ongoing rollout of Nokia's global smartphone strategy," said Chris Weber, president of Nokia Americas. "The Nokia Lumia 900 is designed specifically with the US in mind and the announcement of this collaboration with AT&T, in addition to other recent announcements, signifies a new dawn for Nokia in the US."

The Nokia Lumia 900 benefits from a range of leading content experiences:

- The AT&T U-verse Mobile** app lets U-verse TV subscribers browse the U-verse TV program guide, schedule and manage their DVR recordings, and watch hit TV shows while on the go. The U-verse Mobile library includes more than 100 TV series and more than 700 TV shows from a variety of genres.

- The exclusive ESPN sports hub is pre-loaded on Nokia Lumia smartphones, and provides a one-stop sports application for news, videos and scores.

- The CNN App for Windows Phones provides the latest news and video from CNN's reporting around the globe and direct access to iReport, CNN's participatory news community. Launching globally for free in the next month, the CNN App will be exclusive to Nokia users for 90 days.

- The Univision App will be exclusive to Nokia Lumia users in the U.S. and Puerto Rico for 18 months, delivering unique and exclusive Spanish-language content experiences, including Univision entertainment, sports and soccer coverage, plus news, cooking and local content for different U.S. markets - all in one App.

- A partnership with EA to bring over 20 of the world's most popular games to the Windows Phone marketplace, coming first to Nokia Lumia devices.

"Nokia and AT&T worked hand in hand to bring the Nokia Lumia 900 to market. Our powerful 4G network really amplifies the benefits of the Nokia Lumia 900. Sharing high quality images and videos with its integrated social networking functions is faster than ever; content from U-verse Mobile is more enjoyable on the crisp 4.3-inch screen, and with its huge battery people can do more without worrying about recharging," said Jeff Bradley, senior vice president of devices for AT&T. "Together, we are working to supercharge the ecosystem around the Nokia Lumia 900 and the Windows Phone platform."