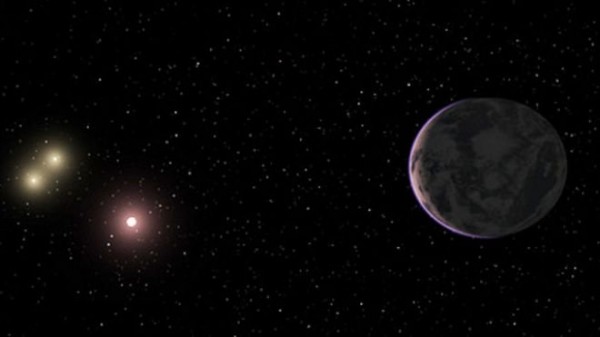 An international team of scientists led by Carnegie's Guillem Anglada-Escud and Paul Butler has discovered a potentially habitable super-Earth orbiting a relatively nearby star. Described as the "best candidate" for supporting liquid water, and therefore life. The planet (GJ 667Cc) is believed to be about 4.5 times the size of Earth.

The parent star (GJ 667C) is 22 light years away and is a member of a triple star system and has a different makeup than our Sun, being relatively lacking in metallic elements. This discovery is the second potentially Earth-like rock scientists have discovered orbiting the M-class dwarf. With a 28.15 day cycle, it's calculated to receive 90 percent as much light as Earth, and much of that is infrared, meaning the actual energy delivered is about equal.

This discovery demonstrates that habitable planets could form in a greater variety of environments than previously believed. Not enough is known about the atmosphere right now to fully nail the water prospects, but it's still our best hope of discovering life as we (don't) know it yet.

Washington, D.C. -- An international team of scientists led by Carnegie's Guillem Anglada-Escud and Paul Butler has discovered a potentially habitable super-Earth orbiting a nearby star. The star is a member of a triple star system and has a different makeup than our Sun, being relatively lacking in metallic elements. This discovery demonstrates that habitable planets could form in a greater variety of environments than previously believed. Their work will be published by the Astrophysical Journal Letters and the current version of the manuscript will be posted at http://arxiv.org/archive/astro-ph

The team used public data from the European Southern Observatory and analyzed it with a novel data analysis method. They also incorporated new measurements from the Keck Observatory's High Resolution Echelle Spectrograph and the new Carnegie Planet Finder Spectrograph at the Magellan II Telescope.

Their planet-finding technique involved measuring the small wobbles in a star's orbit in response to a planet's gravity. Anglada-Escud and his team focused on an M-class dwarf star called GJ 667C, which is 22 light years away. It is a member of a triple-star system. The other two stars (GJ 667AB) are a pair of orange K dwarfs, with a concentration of heavy elements only 25% that of our Sun's. Such elements are the building blocks of terrestrial planets so it was thought to be unusual for metal-depleted star systems to have an abundance of low mass planets.

GJ 667C had previously been observed to have a super-Earth (GJ 667Cb) with a period of 7.2 days, although this finding was never published. This orbit is too tight, and thus hot, to support life. The new study started with the aim of obtaining the orbital parameters of this super-Earth.

But in addition to this first candidate, the research team found the clear signal of a new planet (GJ 667Cc) with an orbital period of 28.15 days and a minimum mass of 4.5 times that of Earth. The new planet receives 90% of the light that Earth receives. However, because most of its incoming light is in the infrared, a higher percentage of this incoming energy should be absorbed by the planet. When both these effects are taken into account, the planet is expected to absorb about the same amount of energy from its star that the Earth absorbs from the Sun. This would allow surface temperatures similar to Earth and perhaps liquid water, but this extreme cannot be confirmed without further information on the planet's atmosphere.

"This planet is the new best candidate to support liquid water and, perhaps, life as we know it," Anglada-Escud said.

The team notes that the system might also contain a gas-giant planet and an additional super-Earth with an orbital period of 75 days. However, further observations are needed to confirm these two possibilities.

"With the advent of a new generation of instruments, researchers will be able to survey many M dwarf stars for similar planets and eventually look for spectroscopic signatures of life in one of these worlds."