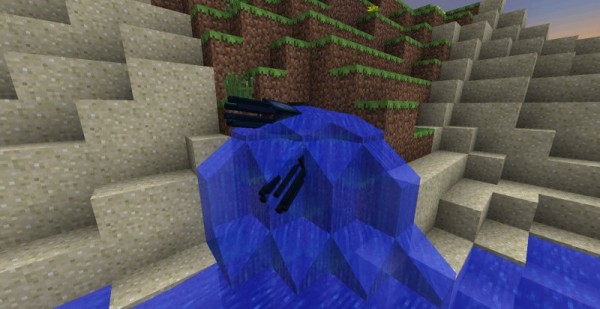 Squid is a passive mob in Minecraft. The passive mobs never attack a player. These mobs except squids require land to spawn on. Squids require water to spawn in. Squid is an 8-armed mob, which spawns in water. They are passive on the players and akin to other mobs in land. They are found in water of any depth, in any biome, and spawn on any difficulty. They got 10 health points.

Squid have 8 arms, blueish-teal skin, and teeth, if killed each squid will drop 1-3 ink sacs that can be used to dye wool. The ink sacs like a unit of dye can be applied directly to a sheep before shearing to make black wool or mixed with varying proportions of bone meal beforehand to yield right gray and dark gray dyes. The squids tentacles open and close, gives them an appearance of moving forward. Squid will hover in place and wander around one layer aimlessly and do not deliberately interact with the player, even if attacked. They prone to gather light under water, such as a Redstone lamp, glowstone. They stay alive but become immobile when beached on land. Squids can take fall damage and burn like any land mob, but they cant drown. It can swim against a current and not get pushed by it.

How to Farm Squids in Minecraft

Squids are weak swimmers and cant swim upstream. The simple way to trap a large number of squids is by digging an 8*8 hole three blocks deep at the bottom of an ocean or large lake. The current into hole will trap squid that wander over it. The complicated funnel and channel systems can bring squid from multiple traps to a certain location for the player to kill.