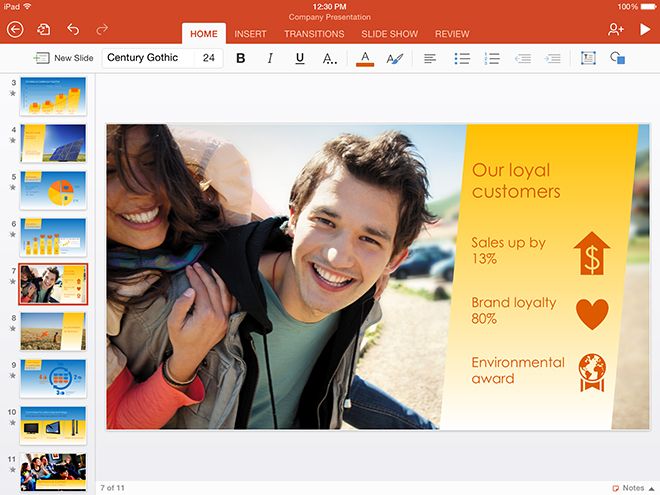 Microsoft on Thursday unveiled new office apps for iPhone and said consumers using any of its mobile apps will be able to create and edit office documents for free. Office didn't debut on the iPad until March of this year.

Microsoft's change of heart happened as mobile phone usage began to eclipse that of laptops and desktop computers; Office's mainstay. Competitors' products were also getting better and were available to mobile users and the price was better.

John Case, Microsoft's corporate vice president for Office marketing, said that the new releases show Microsoft is focused on making its programs the go-to productivity apps on "all platforms, devices and properties."

The call to make Microsoft products work on all platforms is key to chief executive Satya Nadella's efforts to reboot the company in a mobile era. And Office is a big part of that strategy. Previously, Microsoft had refused to release its Office properties on any mobile devices other than its own. But shortly after Nadella took over in February, the company released its first version of Office applications for Apple's iPad. And the move toward partnerships has only grown over the course of Nadella's tenure; this week, Microsoft struck a deal with the cloud-storage service Dropbox to store files for the tech giant's Office 365 subscription service.

Microsoft's plans might sound crazy to most, and at first glance it's easy to come to that conclusion, but the company argues it's a matter of moving its free web apps to mobile. "It's an extension of the strategy that we've got," explains Microsoft's head of Office marketing Michael Atalla. "Its not a total strategic shift, as much of an extension of the existing strategy." Microsoft offers free Office apps online, and Atalla argues that recent development model changes inside Microsoft have allowed the company to open up editing functionality to mobile clients. "We're taking that same user experience we provide online to the native apps of iOS and Android. We want to make sure that our customers can be productive across all the devices they have."

While Microsoft will never admit it, it's that threat more than anything that has forced the company's mobile shift here. "By in large we want that core authoring experience in front of all the users that love Office on any device they choose," explains Atalla. That core authoring experience can help keep Office users hooked, and Microsoft doesn't want to face a future where consumers, and eventually businesses, are no longer obsessing over Word, Excel, and PowerPoint. There's also a play here to get consumers using OneDrive cloud storage and a Microsoft Account. Both of these can help Microsoft tempt consumers over to Office 365 for additional storage and the added benefit of Office for PC and Mac as part of a subscription. It's a bold move from Microsoft, but also a defensive one. Microsoft's competition will now have to look elsewhere to plot their Office attack.