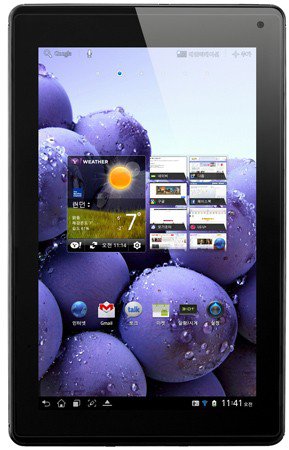 The LG made the official announcement of the first LTE tablet, and it is Optimus Pad LTE. It is a 9.3mm thin slate, features a 1.5GHz dual-core Qualcomm CPU and an 8.9-inch IPS display with 1280*768 resolution, 8MP camera on the rear and an 2MP camera on the front. The users can expect SD card slot that supports 32GB, there is also an HDMI connectivity and DLNA certification for good measure. It is powered with 6,800mAh battery and ships with Android 2.3 no words on when it will grab Ice Cream Sandwich. It will first arrive in South Korea, for more details read the press release.

"With tablets generating five times more traffic than the average smartphone, it's not a huge jump to assume that tablet users need and want faster connectivity," said Dr. Jong-seok Park, President and CEO of LG Mobile Communications Company. "The combination of LG's LTE technology with the tablet form factor is a clear advantage for consumers who use a tablet as their primary consumption device when on the move."

Boasting the best-in-class in the tablets, LG Optimus Pad LTE provides the ultimate user environment to enjoy HD multimedia with a 1280 x 720 True HD IPS display and 8 megapixel camera for shooting high definition video. The Optimus Pad LTE is also the world's first tablet to support an SD memory card expandable to 32GB, recognizing the importance multimedia would play for owners of this device.

Along with these features, the Optimus Pad LTE offers easy-to-use controls and functions such as the Smart Movie Editor for editing pictures and videos more easily. Moreover, Web Duet allows for e-mailing, messaging and SNS sharing with search functions, and On-Screen Phone (OSP) ensures compatibility with LG smartphones.