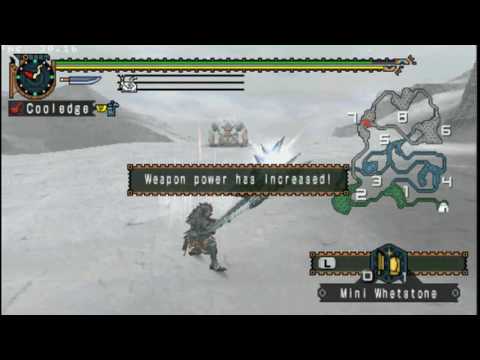 In Monster Hunter Freedom 2 its hard to find the weapon you need, sometimes you dont which one is right. Follow the simple steps below

Greatsword: among the most powerful to choose from, but also the slowest - this is a cutting weapon (you can cut tails of the monster for an extra carve) with a lot of power. Great sword can charge attacks and hit with devastating blows, but in online play, its abilities are handicapped due to their tendency to knock other players around. This can be the most powerful weapon when treated right. Unlike all other weapons, you can still kick with the weapon drawn by pressing Select, very good for hitting allies when they are confused. You can guard using a GS but it is recommended to evade since guarding takes out a big amount of sharpness.

Longsword: the lighter and thus faster version of the Great sword and, by raw power, just as strong. However, they cannot block or charge. To make up for this they have "Spirit gauge". The more you hit something, the more the gauge go up. When the gauge blinks, the weapon power has increased. Sharpness also rises, and it won't bounce off a monster; it can actually be summed up as the longsword's demonization form, you can also make big combos with the spirit gauge at max but they will drain the spirit gauge. This is also a cutting weapon.

Hammer: The "top weapon" in many gamers opinion. It is THE strongest weapon via raw damage, due to many powerful weapons exceeding the 1000 mark. Hammers can be charged by the R button, but unlike the greatsword, you can move while charging to get yourself in a good position, and can release it at any time, sometimes making a swinging motion, which deals multiple attacks against a target but you move uncontrollably. The other one is the golfswing-grandslam, which is very powerful. This is the Superpound. The strongest combo, Triple Pound, is easily done, just press Triangle, Triangle, Triangle. The hammer is an impact weapon, so it cant cut tails, but can crush things easily. by triple pounding certain monsters head/body, they will be dazed and confused, and, in the bullfango's case, go on its back. However note that you cannot block with the Hammer.

Hunting Horn: a weapon with limitless possibilities and a very good support weapon which can play music to help comrades or yourself. It has many similarities to the hammer. It is often viewed as a support weapon only, which is wrong. It is a good solo weapon as well.

Sword and Shield: the easier weapon to learn and use well, it is the weakest melee weapon in the game but it compensates this by its speed,the ability to do quick combos, its high elemental damage, the ability to guard and to use items while guarding instead of having to sheathe the sword, use item and unsheathe again.

Dual Swords: they are the fastest melee weapon in the game, with a little more attack than SnS, they lack the ability to guard, but they compensate it with great mobility, and the demonization mode which makes them extremely sharp, stronger and faster and be able to do the demon dance which is a very fast combo. But demonization mode drains your stamina. Also for delivering so many hits in a moment, the DS loses sharpness quite fast.

Lance: the weapon with the most powerful guard along with gunlance, it does both impact and cutting damage good for doing turtle tactics, by being very precise it makes it easier to hit a boss' weak point, but it lacks mobility though. Also doing the lance's charge ability is a good way to knock down certain monsters but uses a lot of your stamina.

Gunlance: it is a lance with an ability which lets you fire shells, the ammo is infinite and has a special attack called "wyvern fire" which deals HUGE damage but has a slow reloading time of 2 minutes. The disadvantage of the gunlance over the lance its that using the shelling ability and wyvern's fire you will lose a high amount of sharpness. 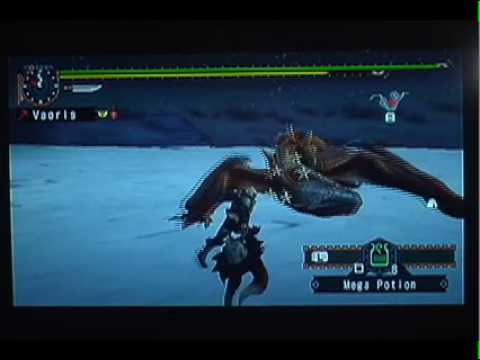 Light bowgun: its a gun, with high mobility, lacks the ability to guard and the power of the heavy bowgun. The advantage of bowguns over other weapons is that you can change its ammo and that there is a lot of different ammo in the game. Some bowguns have the ability to rapid fire with is firing multiple times in quick succession using a single bullet. You can upgrade it so it has more attack, attach a silencer (only good in multiplayer)a long barrel for increased range and accuracy. However, you can only have one of these in a single bowgun.

Heavy bowgun: the same as light bowgun but it lacks mobility, however it has better damage and range you can upgrade it attaching a power barrel so it increases the range the power and accuracy or a shield which lets you guard and compensates a little the lack of mobility. You can only attach one of these to a single bowgun.

Bow: the main disadvantage of bows is that in the beginning game they are extremely weak, however their advantages are good mobility, high elemental damage, infinite arrows and the ability to dodge an enemys attack and still aim quickly and do some damage. The bow can use coatings which there are only four but can change the tide of a battle, these are

power coating: increases the raw damage the bow does

paralysis coating: it can paralyze the enemies after some shots

sleep coating: it puts the enemy to sleep, making the next hit's damage x3 also and expert using the bow can dodge ALL the attacks making these the best advantage of the bow, they can do this because they don't have to be close to monster like in melee and they don't need to stop from time to time to reload (however they need to stop sometimes to use a coating)

If you are a beginner i recommend starting with SnS (sword and shield) because it is easy to use and to learn. If you are not you could just choose the weapon you consider more fun (mine is the bow).

Have variety. It really isn't very fun sticking with one weapon, so be smart on what you bring. For example, A Khezu is notably easier when using ranged weapons, and the Diablos is more like a walking dartboard wh fighting against a Abominable bow (blango fur bow final); the reverse however is true for the likes of Blangonga, Daimyo/Shogun/Uzazza(New crab in MHUnited or MHF2G), Congalala, not to mention the learning curve of using a longsword up to hunter rank 6, then finding a new monster requires a lance or bow.