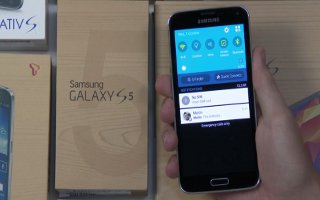 SamMobile obtained a test version of Google's latest OS Android L for the Samsung Galaxy S5 and showcased various updates in the video. The first look of the OS shows how Samsung has integrated its own TouchWiz user interface into Android L.

Samsung has not confirmed any plans, but we already reported about Galaxy S5 and Galaxy Note 4 are the top priority devices to get Android L; so it is a good indication that the company will be updating devices in its Galaxy line to Android L.

The main feature is Material Design; it is inspired by look of paper and ink. The interface is flat and colourful and reactive to users input as well. It is intended to make the user experience seamless and simple. The company redesigned many features in its TouchWiz user interface according to Material Design guidelines. Features and applications, including the drop-down menu, dialer, messages, memo, clock, and many others, have all been revamped with Material Design.

SamMobile notes that this version of the Android L software is riddled with bugs and is noticeably slower than the current Android 4.4.4 KitKat system but that these issues should be resolved before launch.