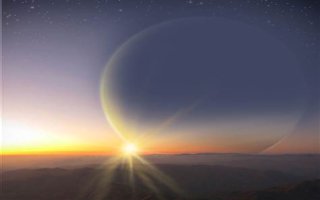 A team of amateur astronomers from around the world has discovered evidence for 42 alien planets, including a Jupiter-size world that could potentially be habitable, it was revealed yesterday. The team, organised online via the planethunters website, analysed data from Nasa's Kepler Space telescope.

Forty volunteers with the crowd-sourcing Planet Hunters project discovered the new planet candidates, which include 15 potentially habitable worlds and PH2 b, a Jupiter-size planet that the team confirmed to be in the habitable zone of its parent star.

This is the second time Planet Hunters project, which is overseen by Zooniverse, has confirmed a new exoplanet discovery. What's more, several candidate planets found by the project may be in the habitable zones of their parent stars. These candidates are awaiting confirmation by professional astronomers.

Researchers suggested this bonanza of planets in the so-called Goldilocks zone around a star, a habitable zone in which conditions are liquid water to exist on a planets surface and potentially supportlife, could mean there is a "traffic jam" of worlds where life could exist, project officials said.

"These are planet candidates that slipped through the net, being missed by professional astronomers and rescued by volunteers in front of their web browsers, said the University of Oxford's Chris Lintott, who helms the Zooniverse, in a statement. It's remarkable to think that absolutely anyone can discover a planet.

The planet PH2 b was found using data from NASA's prolific Kepler Space Telescope and confirmed with 99.9 percent confidence by observations at the W. M. Keck Observatory in Hawaii.

Ph2 b is considered much too large to host life. However, any moons orbiting the planet could be strong candidates, astronomers said. The atmospheric temperature on the planet would range between 86 and minus 126 degrees Fahrenheit (30 and minus 88 degrees Celsius) in the habitable zone.

Any moon around this newly discovered, Jupiter-sized planet might be habitable," stated Ji Wang, a postdoctoral researcher at Yale University. He is lead author of a paper about the discoveries, which has been submitted to the Astrophysical Journal and is available on the pre-publishing website Arxiv.

If a theoretical moon were to host life, it would likely have a rocky core, plus a greenhouse atmosphere of some sort that could have liquid water on its surface, the researchers said.

"Its very similar to what was depicted in the movie Avatar the habitable moon Pandora around a giant planet, Polyphemus," Wang added.

Volunteers spotted PH2 b by watching its parent star. As the planet passed in front of the star, the apparent brightness from Earth dimmed.

This is one of two commonly used techniques for finding exoplanets ; the other is looking for wobbles in a star's gravityas a planet speeds around it.

Excluding PH2 b, citizen scientists recently discovered 42 planetary candidates, with 20 of those likely in their respective stars' habitable regions.

Planet Hunters includes participation from Oxford, Yale and several other institutions. Volunteers pour over data from Kepler. Once the strongest candidates are identified, professional astronomers take a look at them.