10 Reasons Why Windows 10 Is Better Than Previous Windows Versions 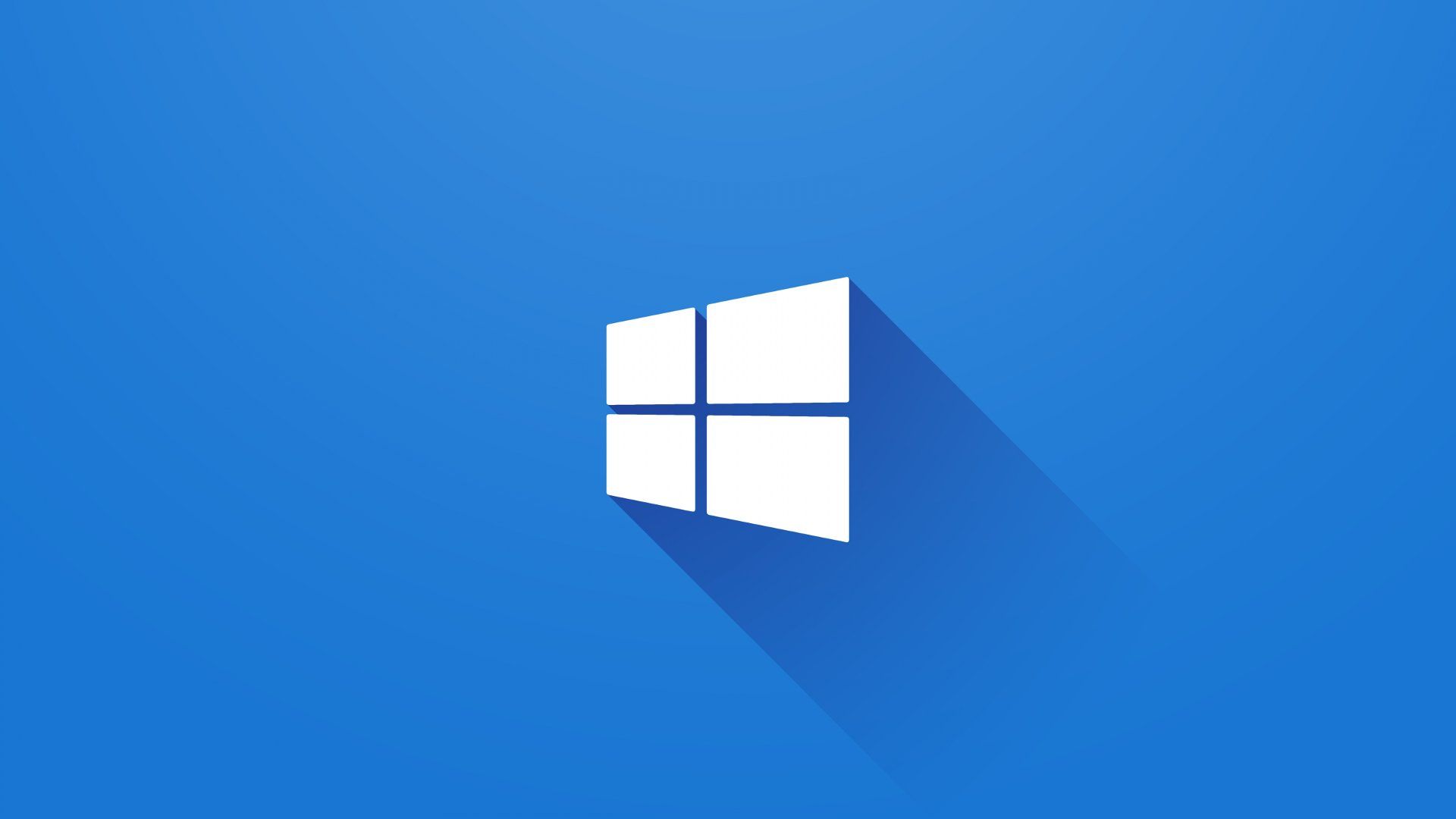 Windows 10, the latest operating system from Microsoft that is released in July 2015. Since its release, millions of desktops and laptops around the world made the leap to Windows 10 - forcibly or not.

Windows 10 has tons of new and improved features which make it stand out from previous Windows versions. By not upgrading, you are seriously missing out on some of the best features Windows has to offer and, simultaneously, delaying the inevitable. In fact, the only reasonable explanation for not making the shift is because you are a business user.

For those who will wade in with various problems and issues that are holding you back, most of those are easily solvable thanks to the customizable nature of Windows 10.

Today, we will be discussing 10 reasons why Windows 10 is much better than previous versions and why you should upgrade to it and join the world of Windows 10. 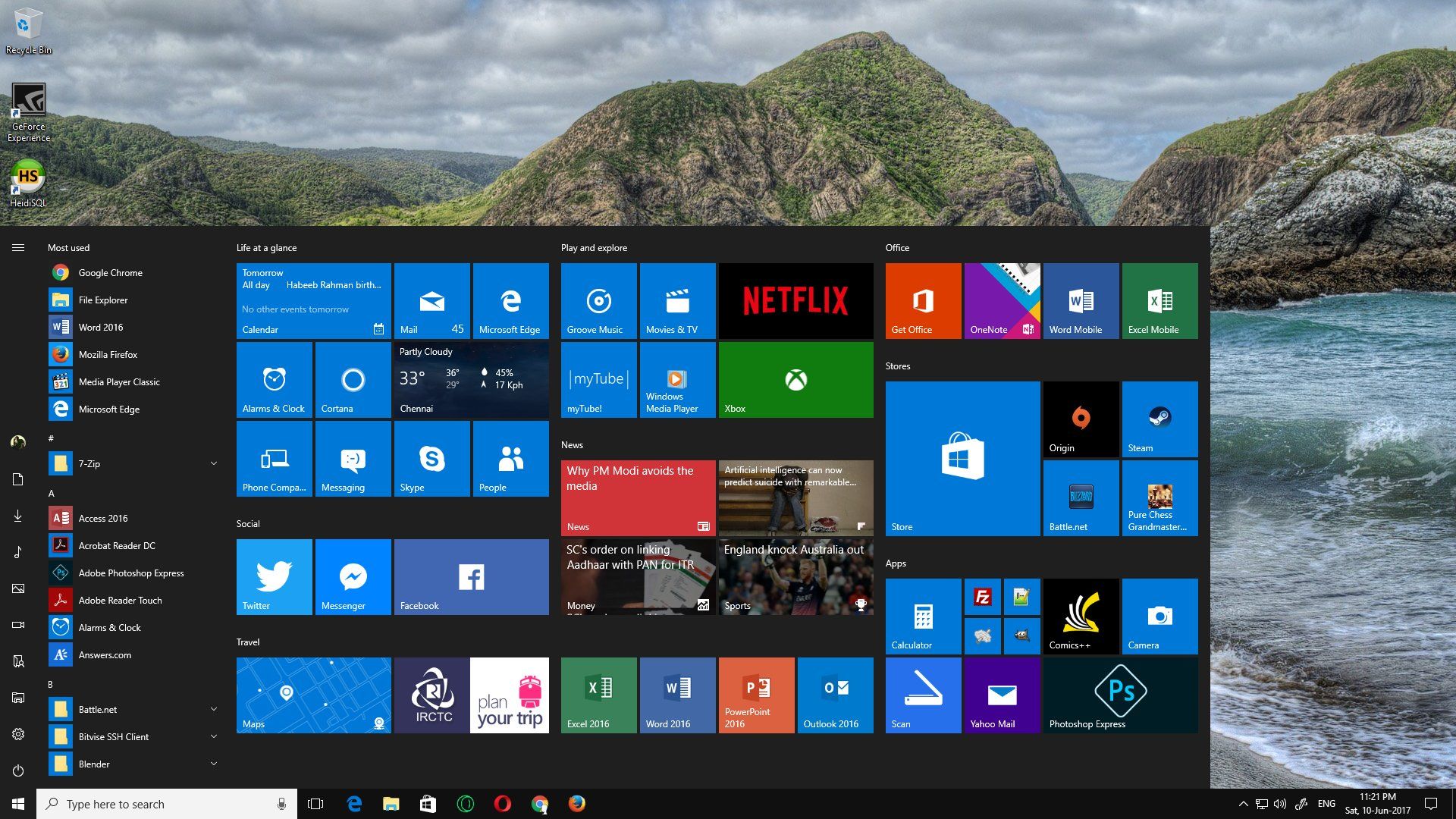 Windows 8.1 users will rejoice! They do not have to stick on with default start button in Windows 8.1, which actually is not a major improvement, clicking the button will only take you to the giant metro start screen. Of course, this absence of an effective start button was very condemned by Windows users when Windows 8 and 8.1 were released.

In Windows 10, however, the Start button is back and you may feel nostalgic, as it brings you back to the superb UI of Windows 7. While it feels odd to call a return to the norm as a progression, Windows 10's Start menu really is the Start menu you know and love from Windows 7 - albeit with some slight modifications that only improve its usefulness.

Aesthetically, the menu is more transparent and sleeker than before. It is now easier to navigate through when you want to do something quickly, and the hidden Shutdown controls of Windows 8.1 have been brought back out to where you would expect them to be. Windows 8.1's Live Tiles are still there, but they have been relegated to the side and are generally best used for news snippets, email updates and weather alerts.

There is one other major addition: Windows 10 now provides an Uninstall link directly on the Start menu, for both desktop and Modern apps. This is a small but welcome step towards easier housekeeping.

Those of you who actually liked the Start menu from Windows 8.1 will not be disappointed either, as you can set it to launch full-screen by default. It also switches rather seamlessly between the two when taking a convertible device from desktop to tablet mode. 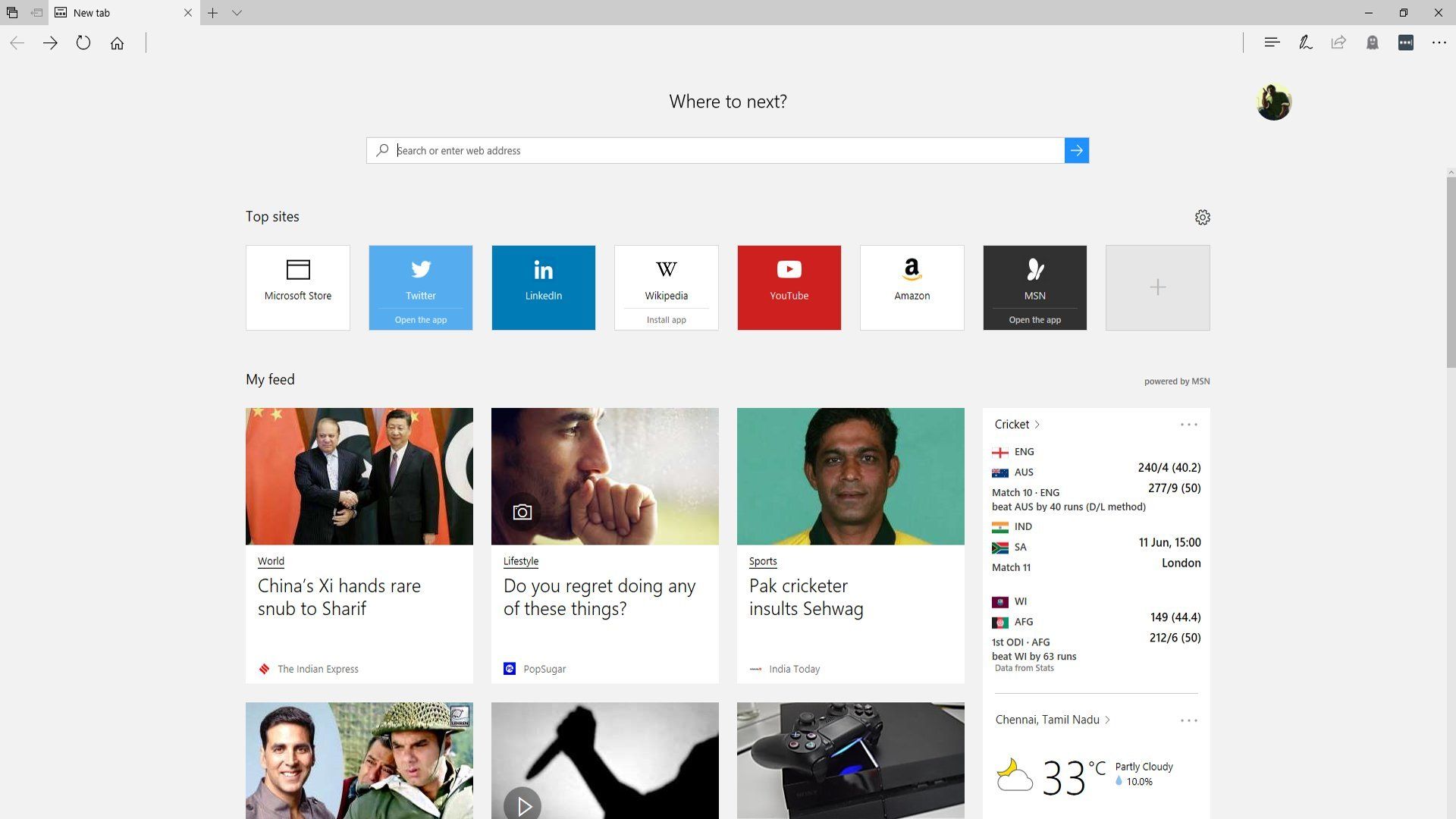 Yes, you heard that right. Internet Explorer - the browser you would love to hate is gone and in its place, we get a new and powerful and fast browser called Microsoft Edge.

Running on EdgeHTML, Edge is blazingly quick, beating SunSpider's gauntlet at over twice as fast as Google's beloved Chrome browser. Microsoft has also dropped in some other handy features.

Reading Mode works like off-line reading app Pocket, whilst a new note-taking ability lets you scribble on and annotate web pages and share them with other Edge users. All of these annotations and notes end up saved in Microsoft's OneDrive too.

Cortana is, as you would expect, integrated into Edge as well. It works in a similar fashion to "OK Google" voice commands, with one example pulling through flight details when someone used Edge voice search for "Delta" flights.

Finally, for the security conscious among you, Microsoft is confident that Edge is far less vulnerable to hackers thanks to its base in the Universal app framework. In fact, Microsoft is offering up a "bug bounty" of up to $15,000 for anyone who manages to expose a security vulnerability. 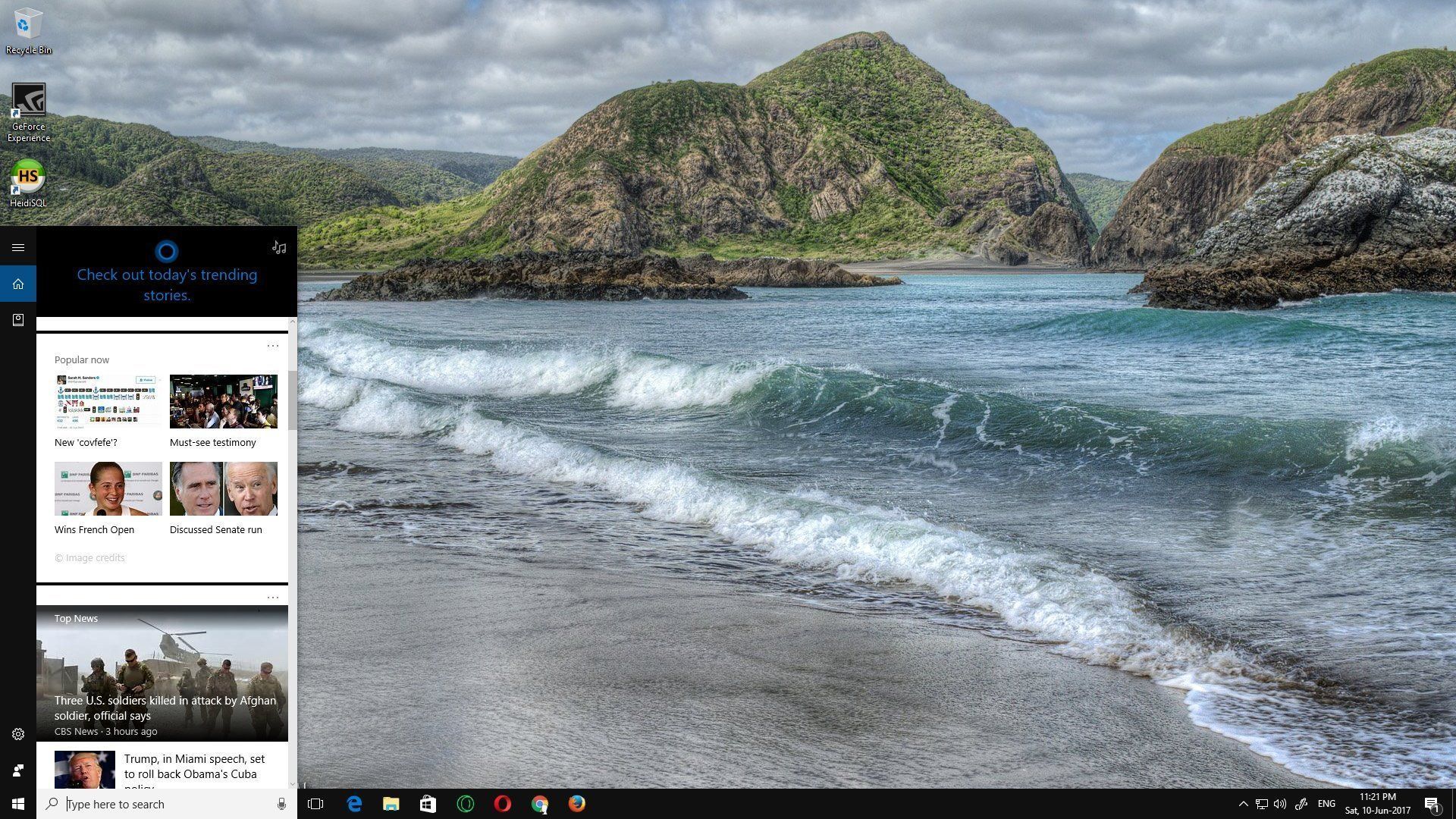 Cortana made its debut in Windows Phone 8.1, but now the personal assistant is being integrated into all versions of Windows 10.

Cortana is now in full control of Windows's search functions: hit the Windows key, start typing and your input is sent to Cortana. In practice, it works just as before - apps and desktop applications appear at the top of the list and can be launched by simply hitting Return. As Cortana's capabilities evolve, though, it could end up being more useful than the old Search function.

In Windows 10, it retains its natural language-processing abilities, so you can enter commands such as "What's the weather going to be like tomorrow?" or "Set an alarm for 7 pm". An optional feature called "Hey Cortana" sets the OS into an always-listening mode, so you do not even need to click.

Since it works via the cloud, Cortana will sync across all your devices and look at your OneDrive storage, meaning it will be able to set reminders or find files no matter where you are. It is also designed to learn what you like over time, offer helpful suggestions or highlight relevant apps. It can also translate documents or speech into 25 languages - handy if you are a frequent traveler.

Cortana's final trick could prove very powerful indeed - if app developers take advantage of it. Apps can integrate with Cortana so that specific functions can be accessed by voice control. The built-in apps provide an early example of what is possible: instruct Cortana to email a friend and the Mail app should pop up with the address field pre-populated.

Windows 10 is way more stable than Windows 7. Microsoft has managed to resolve many of the issues that Windows 7 had. Errors such as svchost.exe netsvc are no longer in Windows 10, providing a better experience.

Windows 10 is also faster in terms of processing and freezes too little as compared to Windows 7.

Design wise, Windows 10 is way more pleasing than Windows 7 and Windows 8.1. Though Windows 7 was already too visual pleasing, Windows 10 takes it a step ahead.

Though Aero has not returned in Windows 10, it still looks a lot better than what Windows 8 used to look.

Windows 10 boots a lost faster than Windows 7 and beats it in the booting speed department hands down. On one hand, Windows 7 takes over 35 seconds to boot, while on the other hand Windows 10 manages to get itself up and running under 15 seconds on modern hardware.

That is a great improvement in booting speed and makes the experience of the users more friendly. 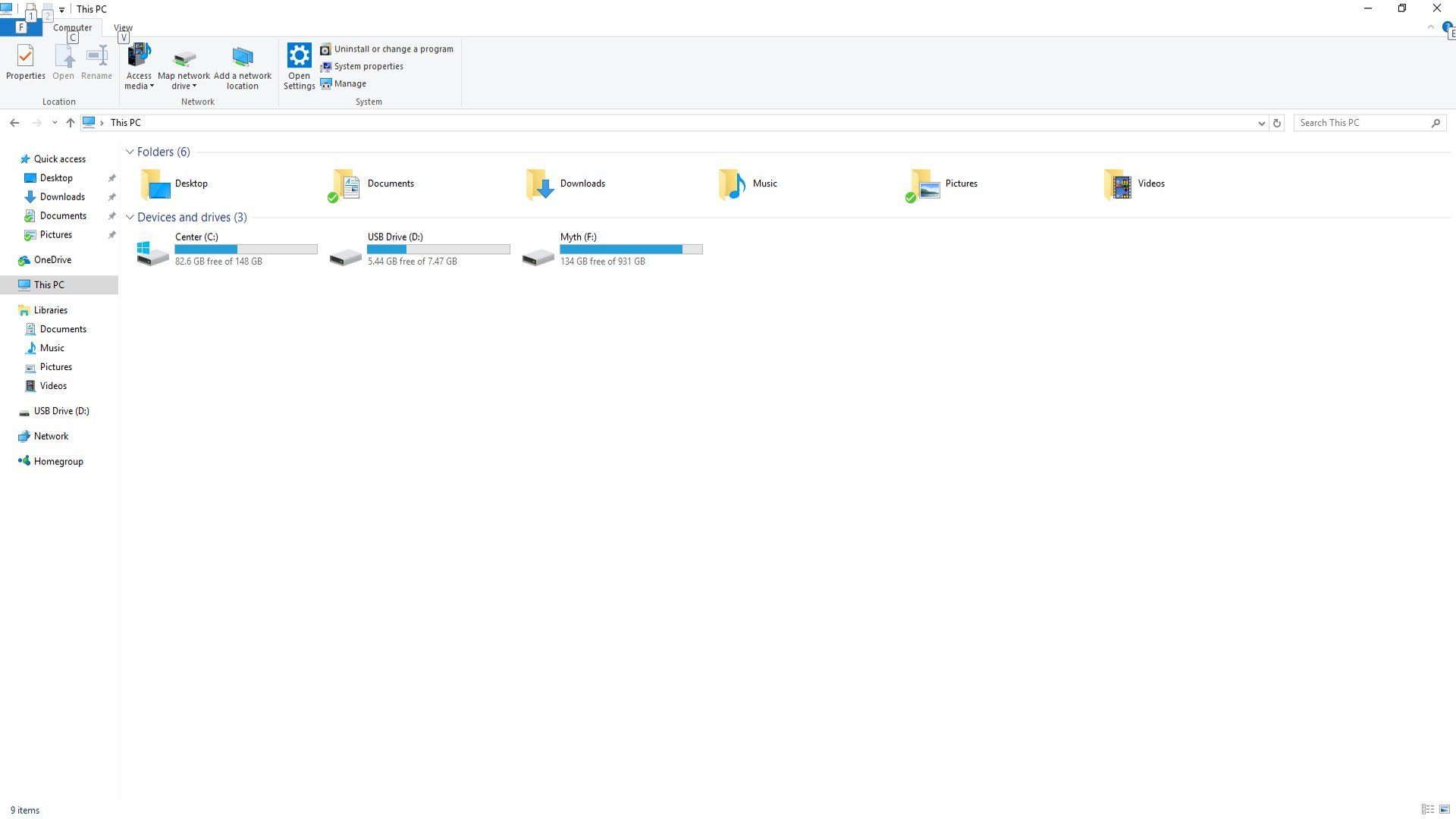 The file manager in Windows 7 was a more of basic type file manager. But with Windows 10, Microsoft has introduced a way better and advanced file manager. The introduction of ribbon UI in file explorer is also a welcome addition.

Overall the stability of the file manager has also been increased by many folds. It is way better than any of the previous versions and one must give it a try.

Multitasking in Windows has always been excellent. In fact, the only thing it lacked was the option for multiple desktops à la Linux. With Windows 10, that niggle is no more as Microsoft has made it possible to create many desktops and full-screen programs and switch between them with ease by just pressing Windows+Ctrl and the left and right keys.

As part of this massive leap forward in multitasking prowess, Microsoft has also introduced two extra snappable windows into its window snapping feature. Yes, this means you can now snap up to four apps or windows together in one desktop, letting you really make the most of your monitor's real estate without having to overlap windows fussily. Snap Assist even cleverly suggests the apps that will work well together, so if you are unsure of what should go where then Windows is doing some of the thinking for you. Handily, it also remembers which apps you tend to combine.

In Windows 10, apps do not start full-screen like they do in Windows 8.1. You can also load apps directly from the desktop, and they simply behave like any other piece of software - exactly as it should have been in Windows 8.1.

Finally, Windows 10 also features automatic OneDrive synchronization, allowing you to back up sensitive or important files away from your computer without needing to worry about it. Dropbox also comes as a native app. 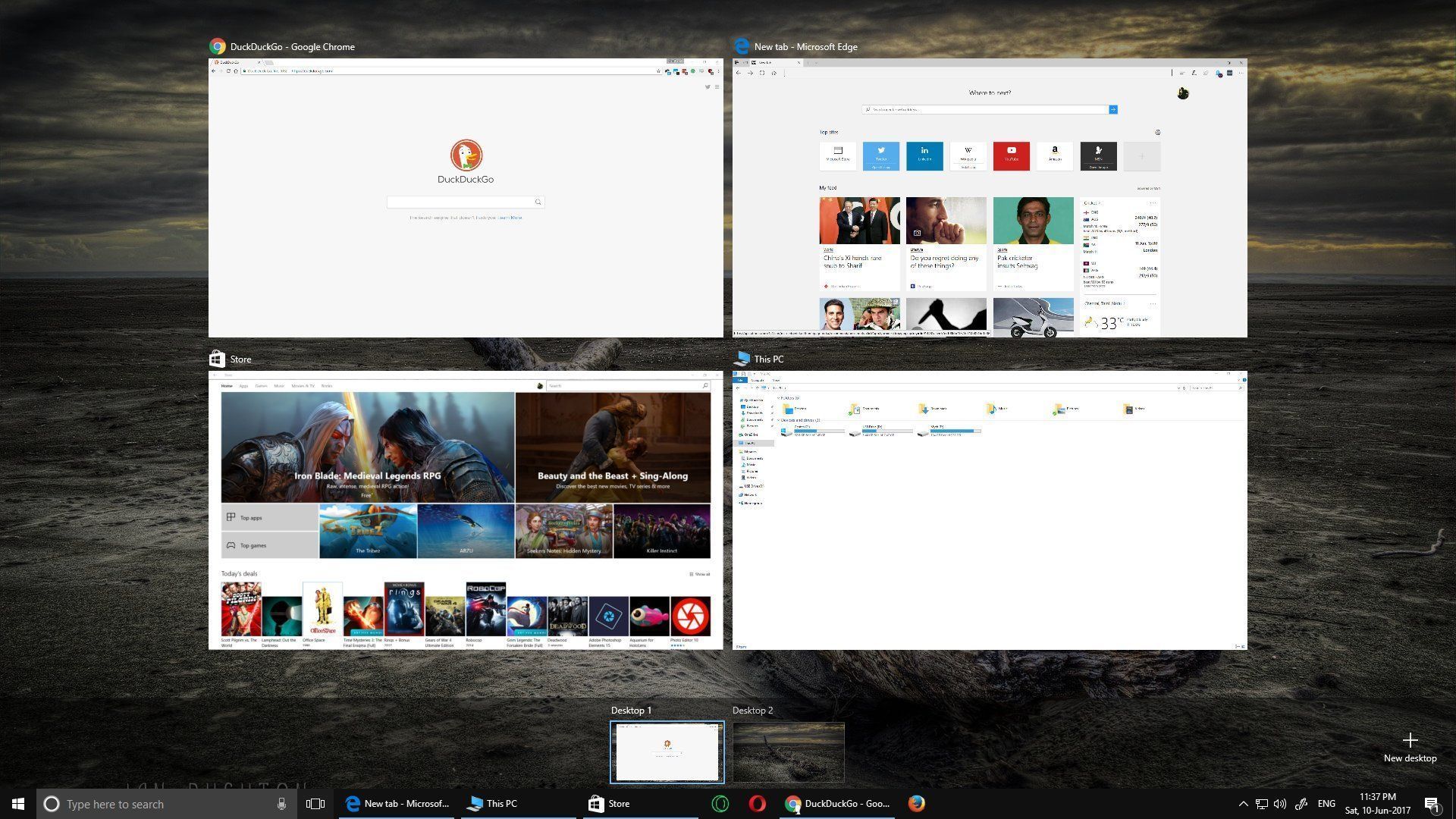 Have you ever used Linux? Then you have noticed the multiple desktop features there. In Linux, you can switch between workspaces when you hit Ctrl+ Alt + (Any Arrow Key)! It is not your regular alt+tab in windows, it is more powerful and will provide you a clean desktop to work with, keeping your old data, opened apps, software in another workspace. It is cool and productive at the same time.

Windows 10 brings the "Multiple Desktop" feature! Or, in other words, it can be called an alternative of "Workspace Switcher".

You see that black square box with a "+" symbol at the center. Hit that to create a new workspace. It will be like a new clean desktop, and your opened data and apps will be pushed to an old workspace and obviously, you can switch back and forth. 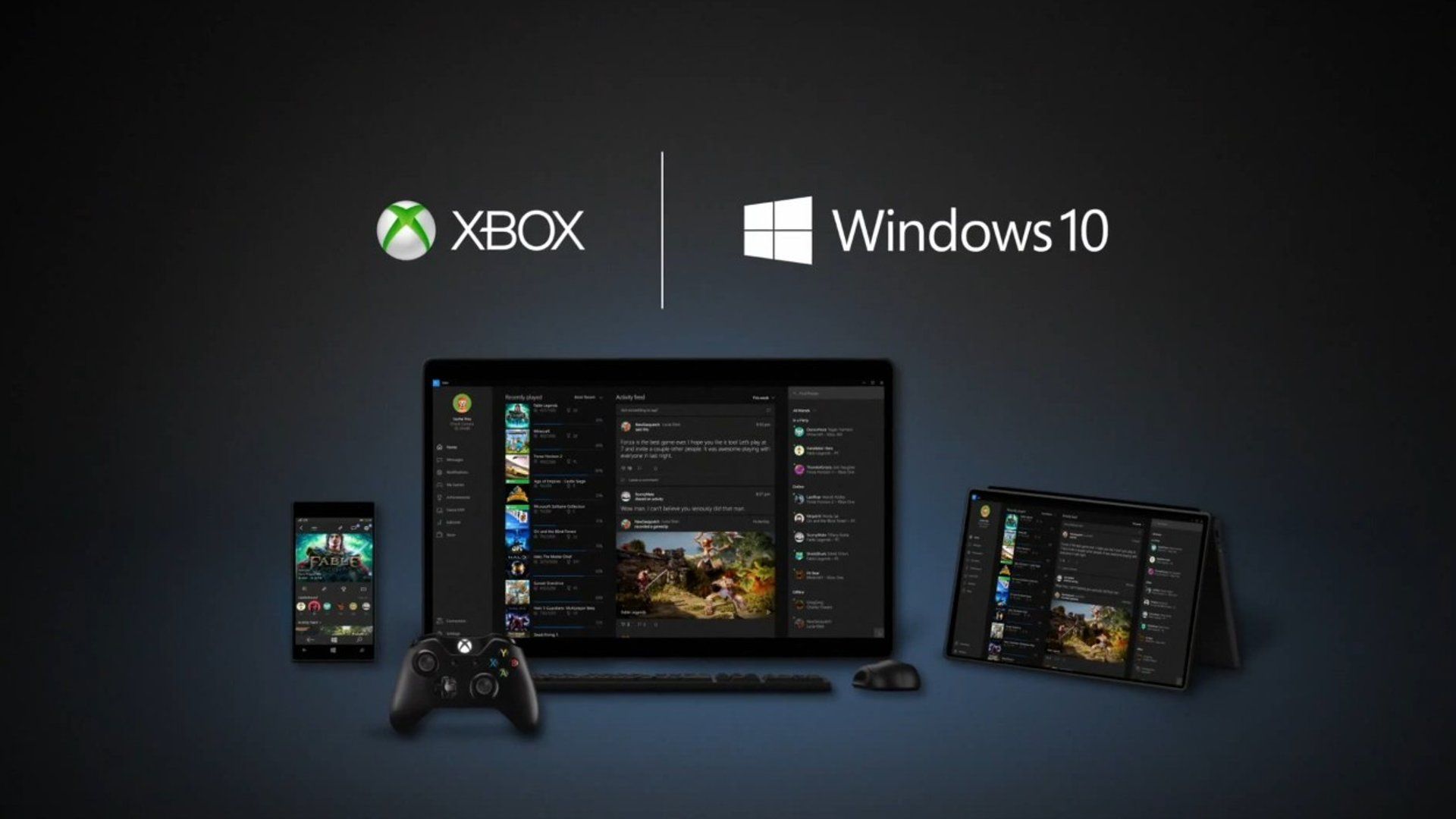 Those of us who used Windows 8.1 to play games will know just how painful an experience it was. I would personally rather go back to using Windows XP than soldering on with getting any games to run natively in Windows 8.1. Thankfully, Microsoft has sorted out this problem with Windows 10, baking games right into the core of its operating system by working closely with the Xbox team.

Not only does Windows 10 have full integration with Xbox Live and the Xbox Games Store, it also lets you stream games directly from Xbox One to your PC (provided you are on the same network). Many Xbox One exclusives will also be Windows 10 compatible, allowing you to pick up where you left off if you decide to whip out your gaming laptop on the go. It is a great addition and makes an Xbox One a near-essential accompaniment to a Windows 10 PC.

Microsoft has also borrowed Sony's PlayStation share system to bring Game DVR to the core of Windows 10. Do something really cool while playing? Hit the share function and the last 15 minutes of footage will be buffered up to OneDrive so you do not miss a thing. Once you are finished playing, you can edit and share the footage over Xbox Live, Facebook or Twitter. You can also stream any game you like, without the need for additional software, to Twitch. 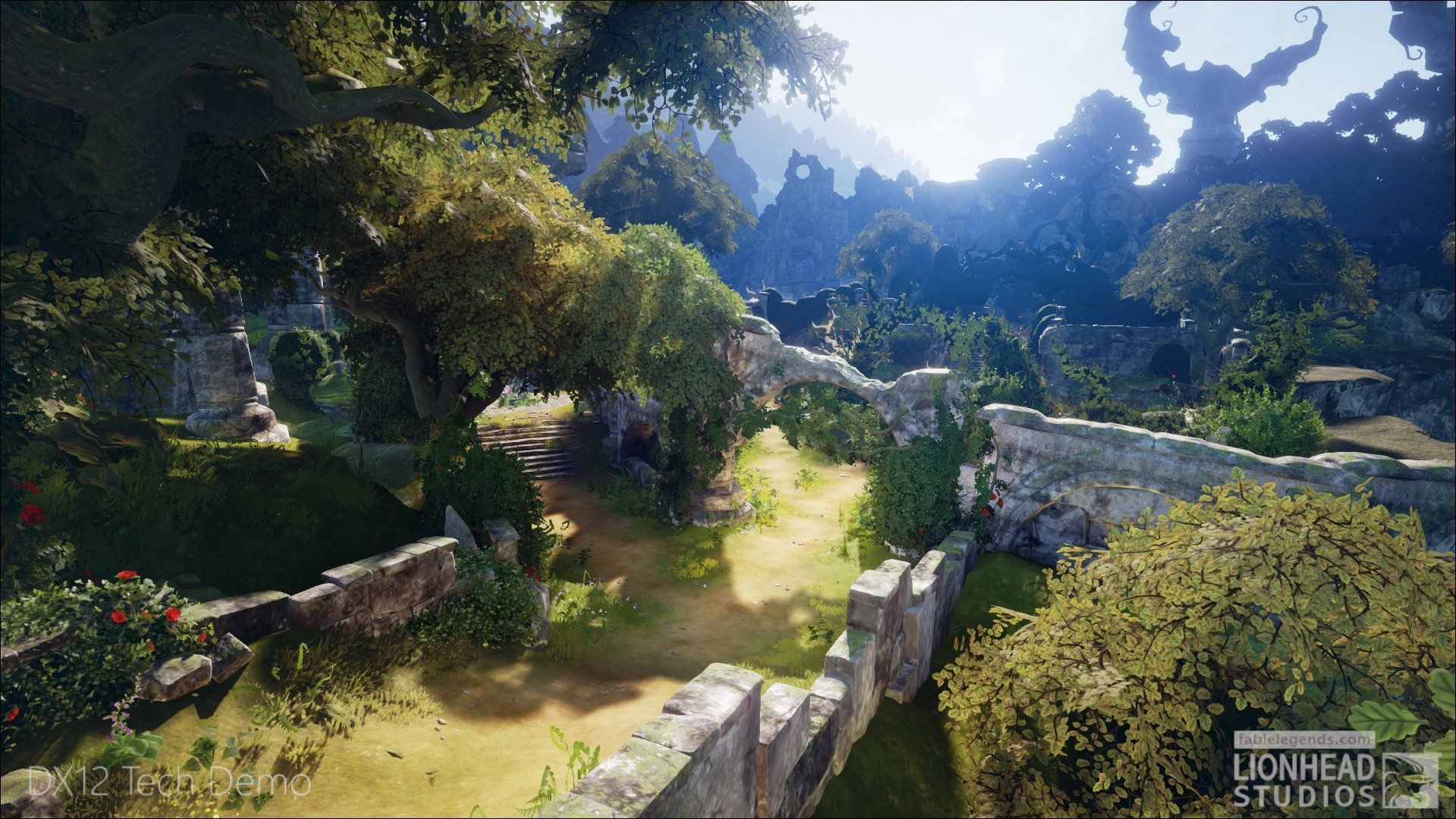 Windows 10 also comes with DirectX 12 baked into the crust, meaning developers have even more resources at their disposal to create absolutely sprawling worlds. Want to play the latest and greatest games on PC? Windows 10 is where you will need to look.

Windows 10 brings a plethora of new features under the hood and we believe the above-mentioned features are the most striking ones in the available build of Windows 10.

We completely recommend upgrading your Windows 7 PC to Windows 10 as soon as you can. You have got to try it to appreciate it or to criticize it!

Online And Offline Security Tips For Your Small Businesses